Russia is celebrating the Day of Military Communications Officer 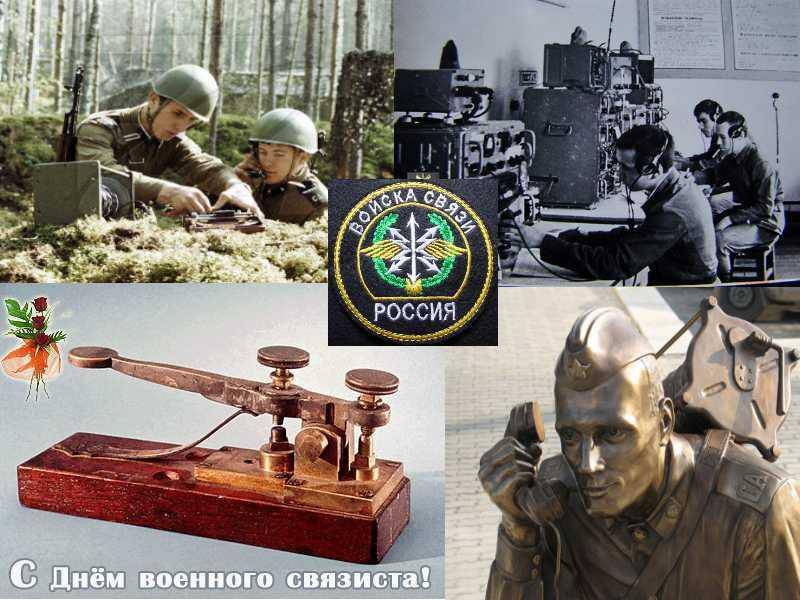 Providing military communications is a constant and daily work, development and use of the most modern equipment and methods of information transfer. Communication is the fundamental “nerve” of the army, with the loss of which command and control ceases, and then even the most heroic army is doomed to destruction.

Together with all branches of the armed forces and the branches of the Armed Forces, the communications troops have written many bright pages in the heroic chronicle of Russia.

Among the military communications, a considerable number of heroes.

We will literally tell a few words about some of them. The commander of the telephone platoon of the 651 separate communications company (121-Infantry Division, 60-I Army, Central Front) Chief Vasily Altsibeev particularly distinguished himself in September 1943 during the crossing of the Dnieper River near the village of Yasnogorodka, north of the capital of Ukraine - Kiev. Under the enemy's hurricane fire, sergeant Altsibeyev was among the first to cross over to the right bank of the Dnieper, laid a cable line and established a connection between the regimental headquarters and the paratroopers who started the battle on the bridgehead. Together with the infantrymen, the brave signaling warrior participated in repelling ten enemy counterattacks and holding the bridgehead.

The telephone operator of the communications company of the 17th Guards Rifle Regiment (5th Guards Rifle Division, 11th Guards Army, 3rd Belorussian Front) of Guard Sergeant Yegor Aristov in April 1945 near the town of Pillau (now Baltiysk, Kaliningrad Region) was one of the first crossed the strait and laid a cable telephone line through it. Provided a stable connection to the regiment commander. Participated in the reflection of four tank enemy attacks, more than once summoned artillery fire.

You can write about these brave warriors on several pages. But we will touch on other aspects of this topic.

Today, due to the changes on the political map of Europe in the 90s, we can lift the veil from the fact that during the war in Afghanistan, 1979 – 1989. was a military secret. The fact is that some of the former Warsaw Pact allies, as well as the former fraternal Allied Republics of the Soviet Union, had hardly gained long-awaited independence, they were quick to share their military-technical legacy with the new NATO allies.

So already in 1990, immediately after the fall of the Berlin Wall, thanks to the efforts of German comrades, the Soviet special equipment was hidden at the disposal of Western military experts, the very equipment used by the radio telegraph mechanics ZAS and ATP specialists of our moto-maneuver groups in Afghanistan. But, they say, the ZA T-219 "Yacht", until recently, faithfully served here and there in the Russian armed forces.

Under the conditions of modern high-tech warfare, it’s not the one with the big club that wins, but the one who can organize the best interaction of his troops and, holding in his hands the threads of control of a complex army mechanism, uses the entire potential of the armed struggle.

The greatest difficulties were encountered in organizing communications in the regimental unit and below, where during the hostilities it became necessary to organize communications between the battalion - the company - the assault group - and even the individual soldier. This was complicated by the absence of a clearly defined front line, the conduct of hostilities by individual strongholds.

But the main reason for the failures was technical backwardness, the negligence of the command when recruiting a group, and a low level of personnel training. According to command estimates, staffing the troops of the grouping involved in the operation amounted to 95 – 98% of the standard requirement. At the same time, there were no more 20% means, and modern means no more than 10%, which resulted in the complete absence of any classification and interference protection.