October 21 2013
15
In the seventies of the last century, several ideas appeared in the leading countries of the world that determined the further development of tank building. New core Tanks equipped with powerful combined armor and smoothbore guns. In addition, the first models of dynamic protection systems appeared. All this required improving the characteristics of anti-tank weapons, including artillery. At the same time, China began work on a promising third-generation tank. Chinese engineers saw more and more new trends in the field of tank building and intended to take them into account in their next project. However, subsequent events led to the abandonment of the construction of the tank and the creation of a self-propelled artillery installation. 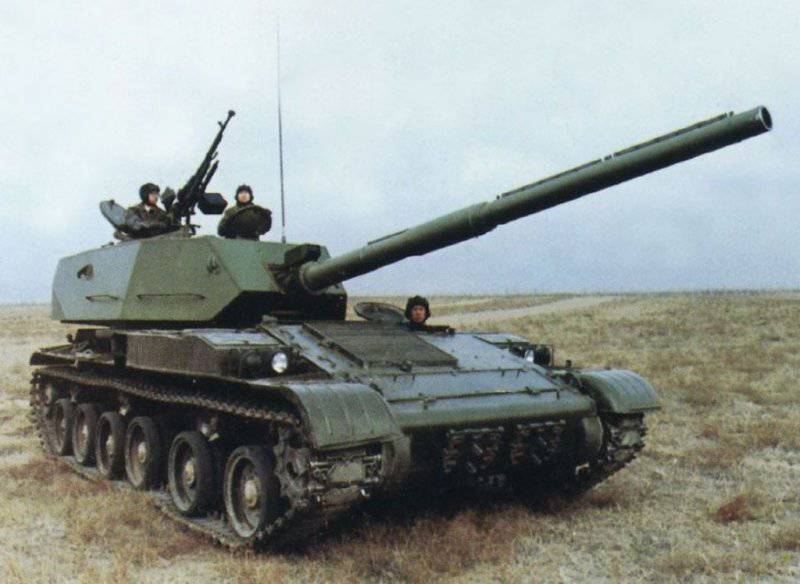 In the late seventies, the Chinese defense industry actively cooperated with the Western, which helped scientists and designers of the Asian state to create a number of new projects. In the project, the promising main tank of the third generation was supposed to use a smooth-bore gun caliber 120 millimeters. Initially, China planned to order a tank gun from Germany, but Rheinmetall, under pressure from the country's leadership, refused to supply. In this regard, the Chinese specialists had to intensify work on the creation of their own gun of the same class. Thus, as of the end of the seventies, China planned to create a tank with a smooth-bore gun caliber 120 mm.

The development of a new tank gun project began in the 1978 year. In just a year and a half, Chinese gunsmiths built the first prototypes of the cannon. They were used in tests and allowed to identify the positive and negative aspects of the project. However, for a number of reasons, in the early eighties, the command of the Chinese armed forces came to the conclusion that the prospects for 125 mm caliber tank guns were very promising. The Chinese military received a Soviet T-72 tank from one of the Middle Eastern countries and studied it carefully. The result of this study was the instruction to copy the 2А46 tool. 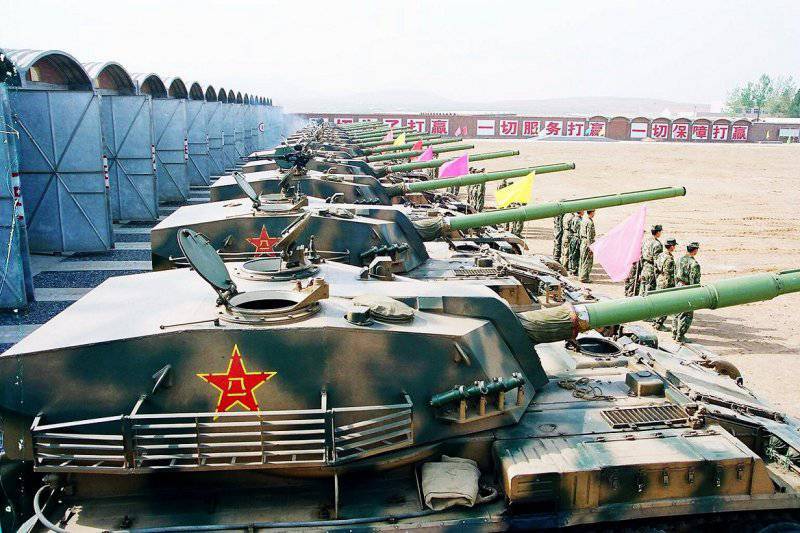 Simultaneously with the design of its own version of the 125-mm cannon, Chinese experts continued to develop the project for the 120-mm caliber gun. Works in this direction continued the plant number XXUMX. Due to good prospects, this project was not closed, but its new goal was the creation of a weapon for self-propelled artillery. It took several years to complete the design of the gun and the creation of the ACS: the first prototype self-propelled gun Type 774 (PTZ89) was put to the test already in 89 year.

As a base for the new self-propelled artillery / tank destroyer, the Type 321 tracked chassis was chosen. This chassis is also used as the basis for the Type 83 ACS and Type 89 MLRS. Chassis Type 321 has a typical self-propelled layout: engine compartment in front of the armored hull, office management and the fighting compartment in the stern. Self-propelled Type 89 equipped 12-cylinder diesel engine 12150L 520 horsepower With a combat weight of the machine at the level of 31 tons, such an engine provided the specific power of the order of 16-17 hp. per ton of weight. Tank destroyer Type 89 could accelerate on the highway to speed 55 km / h. The fuel supply was enough for a march about 450 kilometers. The undercarriage of the base chassis consisted of a drive wheel in front of the hull, six road wheels and three supporting rollers on each side. Suspension of road wheels - torsion bar. 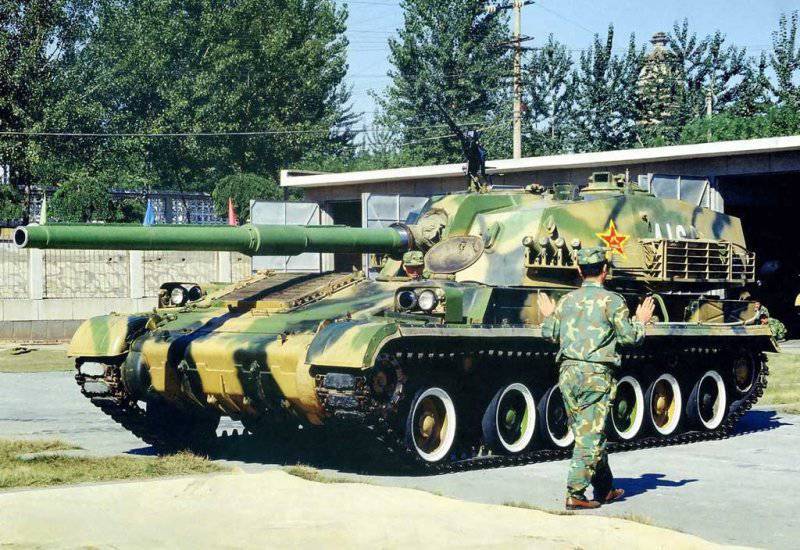 Due to the limited capabilities of the base chassis, the Type 89 ACS received a relatively weak reservation. The plates of the welded hull and self-propelled turret have a thickness of no more than 50 mm. There is information about the use of protection modules installed on the tower. For additional protection, the combat vehicle was equipped with two blocks of smoke grenade launchers and thermo-smoke equipment.

An 120-mm smooth-bore gun with an ejector and a protective casing was installed in an armored turret of a tank destroyer located in the aft part of the hull. The gun has a barrel length 50 calibers and is equipped with a semi-automatic system for sending ammunition. The latter provides the rate of fire to 10 shots per minute. Laying inside the fighting compartment can hold 30 unitary shells caliber 120 millimeters. According to some reports, if necessary, the Type 89 tank destroyer can fire by taking ammunition "from the ground." For this, the crew can use the hatch in the rear sheet of the armored hull. 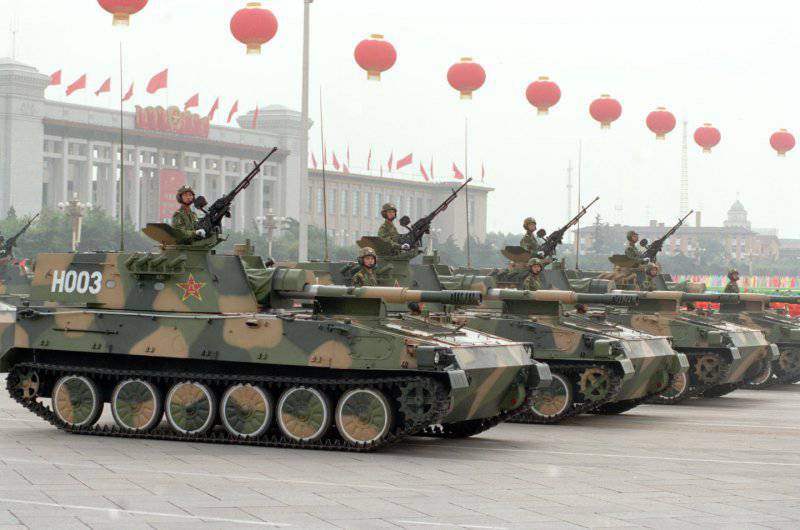 During testing, the 120-mm gun showed fairly high performance. The relatively long barrel of the gun allowed armor-piercing sabot shells to accelerate to speeds around 1650-1660 meters per second. The maximum speed of the high-explosive fragmentation projectile reached 960 m / s. At the same time, the maximum firing range for armor-piercing and fragmentation shells is declared at the level of 2,5 and 9 km, respectively. In the course of testing, an armor-piercing projectile brought to the cannon was reported to have punched a plate with a thickness of 2 mm from a distance of 450 km.

A characteristic feature of the main armament of the Type 89 ACS was the “tank” pickup angles. Due to the specifics of the tasks performed, namely the attacks of the enemy’s armored vehicles, the Chinese tank destroyer can direct weapon at any angle in the horizontal plane, and the angles of elevation and decline are limited and range from -8 ° to + 18 °. 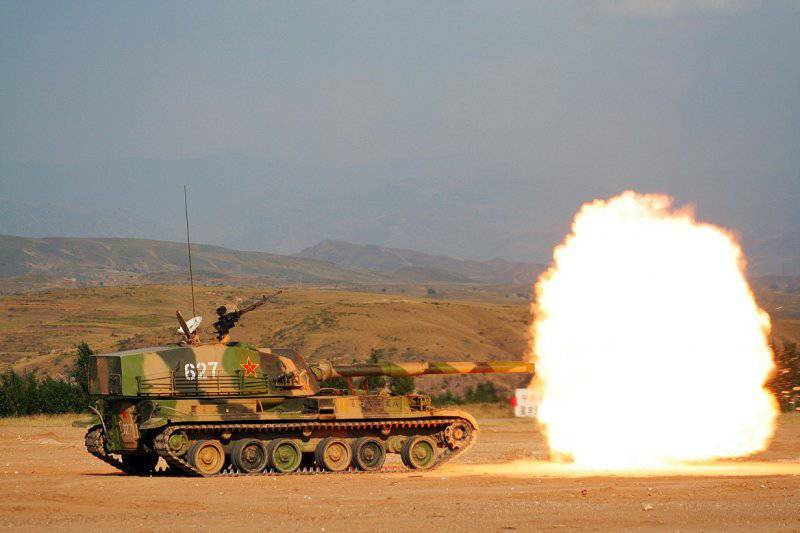 Unlike other self-propelled guns created in the eighties, the Chinese Type 89 was not equipped with a fire control system. For aiming the guns, the combat vehicle was equipped with a combined gunner's periscope sight with day and night channels. The gunner's sight was also equipped with a laser rangefinder. The self-propelled commander has a day sight. In addition, an auxiliary telescopic sight was mounted in front of the tower. As far as is known, no other systems characteristic of modern ACS have been used. Moreover, as part of the equipment of the tank destroyer Type 89, there is even no weapon stabilizer. In this regard, self-propelled guns can not fire on the go.

Additional armament of SAU Type 89 consists of one anti-aircraft machine gun caliber 12,7 mm, located on the turret above the commander's hatch, and one 7,62 mm machine gun. According to some sources, a rifle caliber machine gun is used as a coaxial gun.

Tests of a prototype tank destroyer Type 89 / PTZ89 took several months. According to the results of running and fire tests, a decision was made on the need to continue work on the project. Some elements of the self-propelled gun did not meet the requirements of the customer in the face of the Chinese armed forces. New trials began in the 1987 year. Updated and improved version of the ACS gave the military. Serial production of Type 89 combat vehicles began in the last months of 1988. Before the start of construction, the designers of plant No. XXUMX changed their shape a little to simplify production. 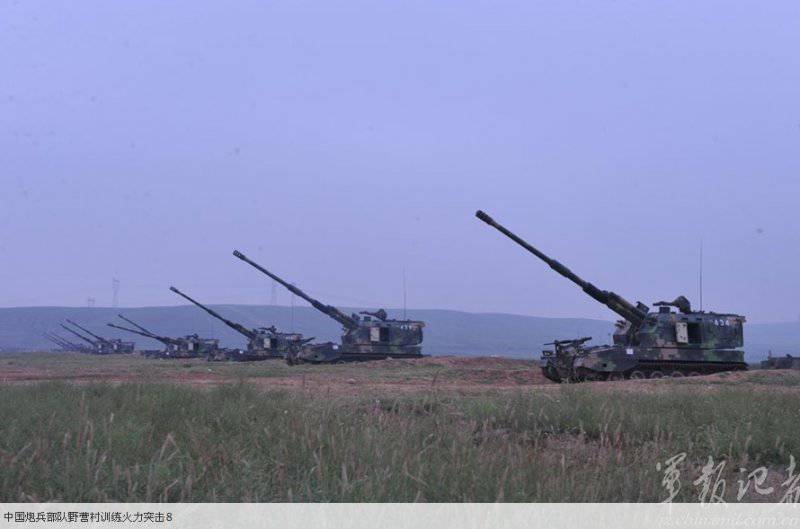 In 1989, the Chinese armed forces were handed over the first batch of 20 self-propelled guns. Soon 80 machines were built, after which their assembly stopped. The Type 89 tank destroyers were distributed among the anti-tank battalions of several tank divisions. Each battalion uses 18 self-propelled guns.

The Chinese Type 89 self-propelled artillery installation, designed to combat modern (at the time of its creation) foreign tanks, looks interesting, but at the same time doubtful. The capabilities of the Chinese smooth-bore gun caliber 120 mm, created as a replacement for the inaccessible guns of German production, can talk about the great achievements of the Chinese defense industry. In this case, the gun is actually the only positive side of the self-propelled gun. The relatively high characteristics of the weapon under certain conditions can be completely leveled by the absence of a weapon stabilizer and other equally important systems. 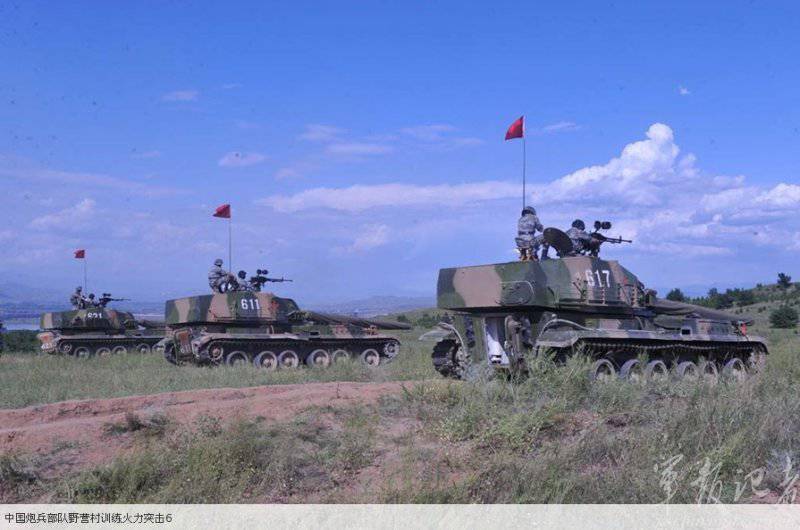 Another at least ambiguous feature of the SAU Type 89 is the ratio of firepower and level of protection in the light of the tasks that this combat vehicle must solve. It is assumed that self-propelled Type 89 should operate in the same battle formations with tanks and destroy enemy armored vehicles. At the same time, having a firepower comparable to tanks, self-propelled artillery mounts noticeably lose their defense level. Thus, the Type 89 tank destroyers risk being destroyed even before they approach enemy armored vehicles at a distance of effective fire.

Despite the dubious combat qualities, the Type 89 self-propelled artillery mounts remain in service with the People’s Liberation Army of China. The total number of currently used ACS of this type does not exceed 90-100 units. Probably, such a small number of built tank destroyers was caused precisely by ambiguous perspectives. However, in the late eighties, the command of the Chinese army decided to adopt the Type 89. The reasons for this decision are not fully understood, but the constructed equipment is still in use.