About Georgian wine, Stalin and the national question 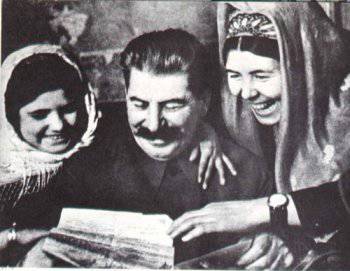 The murderer of another Russian guy, this time in the Moscow area of ​​Biryulyovo, turned out to be a bastard from Azerbaijan, who is being searched for murder in his homeland. Thus, Russia for several years has turned into a garbage can, where the dregs of society from all over the world flow. In such a nutrient medium, the thousandth herd of Red Sea – Tolstozh… x chiefs, from the so-called municipal police to the migration service at all levels, successfully fatten. They drive in cars with flashing lights and continue to mumble about the fact that crime has no nationality.


In large part, this "budget public" consists of small and cowardly people. They easily set up a few law enforcement officers against another angry mob. And its most active participants after the suppression of their "riot" called drunken scumbags.
In the meantime, overcrowded trains and airplanes from Central Asia and Transcaucasia continue to arrive daily in major cities of the country. A special sort of immigrants - from the Russian North Caucasus. The local youth has lived for more than a decade in fact in the war zone and, as a rule, does not have the skills of peaceful working professions. At the same time, Chechnya, Dagestan and Ingushetia are stunned by unemployment, which pushes young people into the incomprehensible and sometimes hostile world of the northern Russian territories, where no one expects them. And where they often assert themselves with a knife and a pistol.

All this is rapidly leading to a dangerous delimitation of citizens of the country along ethnic lines. The greatest tension passes through the Krasnodar Territory, Stavropol and the Rostov Region. Ethnic incidents happen there almost daily.

However, so much has been said and written about it that once again the trumpet truths get boring until another stabbing shakes the indigenous population somewhere in Kondopoga, Sagra, Pugachev, St. Petersburg, Volgograd, Moscow ... But there is problems and deeper content.

Flirting of the Moscow federal authorities with illegal and legal Asians, as well as their patrons in the Middle East, becomes a cover for the gigantic fuss of various “interested” people around the largest fragment of the USSR - the Russian Federation. Well-known Russian intellectuals and specialists repeat this. Same Eugene Satanovskiy, President of the Institute of the Middle East, a leading expert in the field of policy of the countries of the Middle East.

It has become an axiom that the current federal government is firmly seated on the oil pipe and does not do anything that could change this shameful state. On the contrary, everything that still remains alive from the Soviet rich heritage is stupidly and criminally destroyed by a handful of officials attached to power. Before our eyes, the educational system is changing for the worse, the machine-tool industry, the electronics industry, civil aviation and much more are brought into decline. Against this background, the presidential team continues to look for markets around the world for its favorite gas and oil. On your mind - where else to hold the pipe?

Can such primitivism be left unattended in the modern developed world? Of course not. And now the former Bedouins, educated in the best universities, are thinking about how to break the neck of this colossus and snatch their own. Such pathos is not without foundation. They say that Belaruskali abandoned by the “Russian” oligarchs has already fallen under the influence of the well-known Middle Eastern dwarf state of Qatar. Belarusian fertilizers are offered for sale through it anywhere, even to Brazil. Not for nothing, it is clear that the father imposingly suggests the Kremlin to master our Kaliningrad region.

Qatar in general is a vivid example of how several people in burnuses, with brains and money, can be led by the nose of a “northern bear” with all its thieving and stupid bosses, with their atomic clubs. At first, the guys in the burnuses built gas liquefaction plants, donated gas tankers and started selling gas regardless of the presence of pipelines. Today, they are building gas terminals in Poland, and very soon they will offer our Slavic brothers from Ukraine and Belarus, as well as to buyers from the Baltic countries, cheap gas.

Another gift from Qatar is financing the construction of a gas pipeline from Turkmenistan through Afghanistan to the seaports of Pakistan. The Taliban, great friends of the Qatari sheikhs, will be blessed unconditionally. Turkmen gas, which comes to us today in large quantities, will run out at once.

The final blow to the “world backstage,” including Muslim, in Putin’s Russia could be a collapse in crude oil prices. At the beginning of the 80 of the last century, Saudi Arabia, in collusion with the United States, knocked them down to 9 dollars per barrel. With the cost price in 14 dollars on Soviet oil and the huge military spending on the Afghan war, the USSR was doomed - and after 10 years it ceased to exist. What will happen to the Russian budget, more than half formed from future revenues for the export of oil and gas, if all these factors fire at the same time?

With the budget and with the country will be very bad. Buy defense equipment, civilian and military aircraft, milk, meat and potatoes for food there will be nothing. Production of all listed in own country today is systematically approaching zero. Premier M, his ministers Manturov, Lebanon, Poghos, Shuvalov, brilliantly cope with this, and the president, though he thinks about something important, but more often - international (according to the Constitution). In order not to interfere with them, the government imports more and more hundreds of thousands of migrants from the south. As a result, the protest of the boys from hundreds of provincial and metropolitan "biryulevy" will continue to be directed against them, and not a handful of "new Russians" pumped with money.

So it turns out that the external problems of the country for someone are perfectly combined with internal, international. At the same time, our Qatari and Saudi "friends" hardly "saw" hundreds of billions of dollars from oil and gas, like our pseudo-rulers. They train theologians and send them to Russian mosques. In parallel, equipping the type of one-handed thugs Khattab, and those with weapons in the hands they win new living spaces for their owners.

The global trend of mass relocation of people from poor Asian sands to the north is only gaining momentum. By the way, we are not alone in this. In Europe, the same problems. But to confront this is necessary. The question of returning to the propiska system is already being discussed. It is time to establish the municipal police, making its employees all-powerful and highly paid combat units. To recruit her among army officers and servicemen leaving the ranks of the Armed Forces.

It is time to return and the Ministry of National Affairs. Even the bloody tyrant I. Stalin understood this and headed the specialized Commissariat personally. It was located in a beautiful place - in Trubnikov Lane of Moscow. At the same place Minnats revived B. Yeltsin. But at the beginning of 2000's, Putin closed down. They say that an eye to the building was put by his friend, an intelligent-looking man with a beard and wearing glasses - Minister of Economic Development G. Gref.

Since the time of Joseph Stalin, a collection of excellent Georgian wine was kept in the basement of the ministerial house. What would Joseph Vissarionovich offer in this situation: “Let the Georgian greet comrade Gref leave to himself. But the ministry, comrade Putin, it’s time to return! ”

Ctrl Enter
Noticed oshЫbku Highlight text and press. Ctrl + Enter
We are
“And They Are Us About Yarema”About Stalin and Khrushchev
43 comments
Information
Dear reader, to leave comments on the publication, you must to register.