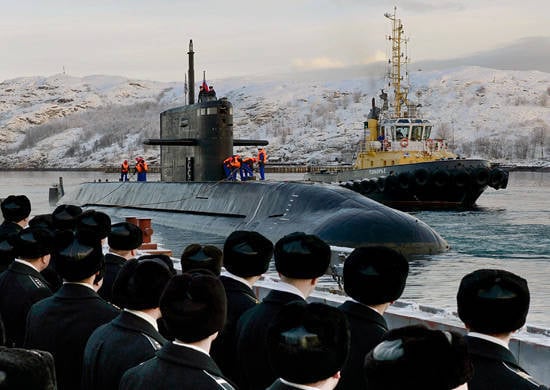 Today, the lead diesel-electric submarine (DEPL) "St. Petersburg" of project 677 arrived at the main base of Kola flotilla the diverse forces of the Northern Fleet (SF) for the further implementation of the test program.


In the city of Polyarny, at the berth of the connection of the diesel submarines of the Northern Fleet, a ceremonial meeting of diesel-electric submarines "St. Petersburg" was held.

In the near future, the crew of the St. Petersburg submarine will have to start working on a number of complex tests in the waters of the Barents Sea, including the deepwater ones.

The head boat "St. Petersburg" series of non-nuclear ships of the project 677 was laid on the stocks of the "Admiralty Shipyards" in December 1997. In April 2010, the boat was accepted into the Russian Navy for trial operation.

A feature of the 677 series of boats is the combination of small size and low noise level with powerful torpedo and torpedo-rocket armament. Boats of this series can counteract both underwater and surface ships, and are designed to protect naval bases, the sea coast and sea communications. In 2013, the Admiralteisky shipyards resumed the serial construction of the diesel submarines Sevastopol and Kronstadt of the 677 project.

Ctrl Enter
Noticed oshЫbku Highlight text and press. Ctrl + Enter
We are
The diesel-electric submarines Rostov-on-Don will begin testing in the Barents SeaCharged last Bulgarian submarine
51 comment
Information
Dear reader, to leave comments on the publication, you must to register.