October 19 1097, on the advice of princes in Lyubech, Russia’s division into fiefdoms was legalized 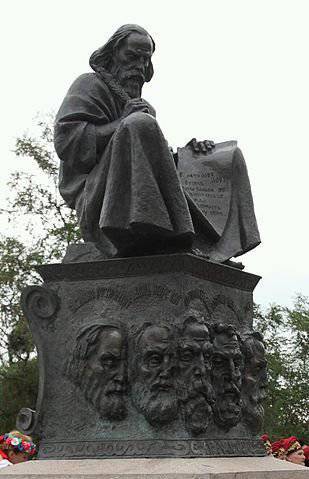 19 October 1097, on the advice of the princes in Lubeche, the principle of the princes inheriting the lands of their fathers was proclaimed. This decision ascertained the existence of a new political system in Russia, and should have led to the cessation of inter-princely strife over the frontiers and rallying them against the Polovtsi who had ruined Russian lands. Now, each of the princes ruled independently on the land, inherited from his father - “each shall have his fatherland”. This decision legitimized the actual division of Rus into specific princedoms.


The events of previous years convinced the princes of the need for this decision. Against the background of constant Polovtsian raids and campaigns, there was a struggle between the Grand Duke of Kiev Svyatopolk Izyaslavich, the rulers of Chernihiv and Seversk lands, Ryazan, Murom and Tmutarakan princes Oleg and Davyd Svyatoslavich, and also the Pereyaslavl Prince Vladimir Monomakh and his sons. A real civil war was raging in Russia. In 1094, Oleg, together with the Polovtsy, forced Vladimir Monomakh to leave Chernigov and go to Pereyaslavl. Vladimir Vsevolodovich even built the fortress of Osteretsky Gorodets in the middle of the road from Chernigov to Kiev, in order to make it difficult for his rivals to bond. In May 1096, Vladimir Monomakh beat Chernigov with an unexpected blow, Oleg retreated to Starodub, where he was surrounded. Oleg was almost defeated, but the Allied Cumans rescued him - they hit the Pereyaslav principality and Kiev. The Chernigov prince was able to slip away to Smolensk, where his brother Prince Davyd was sitting at that time.

In 1095, the son of Vladimir - Izyaslav captured owned by Oleg Moore. Prince Oleg, gathering troops in Smolensk, marched on Murom and demanded Izyaslav to leave his ancestral place in his father's fiefdom - to Rostov and Suzdal. But Prince Izyaslav gathered an army to defend Murom from among the Rostovites, Suzdalians and Belozertsy and decided to give battle. In the battle under the walls of Murom, Prince Izyaslav died, his army was defeated. As a result of the victory, Oleg's troops occupied Murom, Rostov and Suzdal. However, Mstislav and Vyacheslav Vladimirovich with the help of the Novgorod, Pereyaslav and Polovtsian troops forced Oleg to retreat. Mstislav set off in pursuit and defeated Oleg in the spring of 1097, at the confluence of the Kolokshi River into Klyazma. Mstislav captured Oleg's patrimony - Ryazan and Murom.

The situation of Prince Oleg became hopeless, and he was forced to agree to peace and take part in the congress, which was supposed to end the quarrels and civil strife. Moreover, the balance of power was such that Monomakh, who won a military victory, could not dictate his terms. The congress was not assembled in Kiev or Pereyaslavl, but in Oleg's birthplace — the ancient Lyubech. The city was located at the junction of Kiev, Chernihiv and Smolensk lands. At the congress came - Svyatopolk Izyaslavich, Vladimir Monomakh, Oleg and Davyd Svyatoslavich, David Igorevich and Vasilko Rostislavich.

Princes argued, poured insults, but did not object to the general idea. Monomakh insisted that Russia is dying of contention, “almost ruining the Russian land,” and the Polovtsy, “we will bring the land to the ground.” In order to avoid welfare for the future, the princes decided “let every man have his father-in-law”. What fathers owned, let their children own. Svyatopolk Izyaslavich received Kiev and Turov; Vladimir - Pereyaslavl, the border area to Kursk, Suzdal-Rostov land, Smolensk and Beloozero; Svyatoslavichi divided among themselves the land of his father - Davyd received Chernigov, Oleg - Novgorod-Seversky, Yaroslav - Murom. David Igorevich got Vladimir-Volynsky and Lutsk, Vasilka with Volodar Rastislavich - Terebovl, Cherven and Przemysl.

Transitions by a ladder from one inheritance to another were canceled. It was assumed that this decision will not cause the collapse of a single power. Kiev was recognized as a common property, the throne of the Grand Duke was still passing by seniority, the younger princes were to obey the Kiev monarch. The princes together kissed the cross: "Let the Russian land be our common fatherland, and whoever rebel against his brother, we will all rebel." Thus, already having deep cracks, dissecting the state, were legalized. As the “princely tribe” grew, Rus continued to break up, with which the princes ’capabilities fell, to solve national problems. On the other hand, each prince wanted to decorate his land, city, invited various craftsmen, artisans, architects. The flowering of local cultures began, the economy developed. But we must not forget that these successes could not compensate for the dramatic narrowing of the princes' ability to solve national affairs.

In addition, the decisions of the princes of a fraternal alliance remained good wishes. Vladimir was dissatisfied with the fact that he could not secure a military victory over Oleg - he got in South Russia constantly ruined Pereyaslavl and border lands. Svyatopolk was also not satisfied. Kiev was not a hereditary possession, only Turovo-Pinsk land could be left to descendants. In court circles, it was rumored that Vladimir Monomakh had conspired with Vasilko Terebovlsky against Svyatopolk. Possession of Cornflower was small, but he was a skillful commander and possessed strategic thinking. He had plans with the help of the Pechenegs, Torks and Berendeys to seize Poland, Bulgaria, settle some Bulgarians in their possessions - “seize the Bulgarians of the Danube and plant them”, and then hit the Polovtsy.

Vasilko returned from Lyubech to his land through Kiev and was invited to the palace of Svyatopolk. In Kiev, he was captured and the henchmen of Vladimir-Volynsk Prince Davyd Igorevich gouged out Vasilko's eyes and took him to Vladimir-Volynsk and were thrown into a dungeon. This event triggered a new civil war. As soon as it became known about this monstrous event, Monomakh was the first to sound the alarm, as if justifying the rumors of collusion with Cornflower, appealed to the former enemies, Davyd and Oleg Svyatoslavich. Davyd and Oleg supported him, immediately led the squad. The united army stood by the city. Svyatopolk panicked, he did not have the strength to fight the combined forces of the three strong princes. He even wanted to escape. But then the Kiev church boyar elite intervened, it did not open the gates to Monomakh, who was at the Kiev table’s step (in Kiev Monomakh’s authorities did not like, he was too independent), prevented Svyatopolk from escaping and expelled the negotiators. Metropolitan Nicholas (Greek) and his stepmother, Grand Duchess Anna, came to Monomakh. The Metropolitan turned the case so that it was Monomakh and Svyatoslavich who were tormenting Russia with a new swill.

Vladimir offered to immediately make peace with the Grand Duke. Monomakh was forced to retreat from Kiev, Svyatopolk was left alone. In Volyn, a fierce war broke out. Brother Vasilka, Volodar Peremyshlsky joined against Davyd Igorevich. Davyd was besieged in Buzhsk, gave his blinded prisoner to his brother, and then issued Rostislavich for execution and his advisers. Davyd dodged, dumped all the blame on the Grand Duke. As a result, Svyatopolk moved to him from Kiev. Pursued by the princes, Davyd fled to Poland. The prince of Kiev was not satisfied with Volyn and decided to take away Przemysl and Terebovl from Volodar and Vasilka. The brothers refused and defeated the army of Svyatopolk. The Kiev prince did not calm down, made an alliance with the Hungarians. Hungarian King Koloman with 40-th. army broke into Russia. But he was not going to give the Carpathian region Svyatopolk and his son Yaroslav. I decided to keep the land myself. He even brought bishops with an army to cross over Russians and officials for the occupying administration.

Vasilko and Volodar were besieged in Przemysl. At this time, returned Davyd Igorevich. The Poles did not give him help. The three princes, Davyd, Vasilko and Volodar, united in the face of a common threat, and called for help the troops of the Polovtsian Khan Bonyak. The Hungarian army suffered a terrible defeat in the battle of Vagra. In Volyn there were fights again, in which the son of Grand Duke Mstislav died. This massacre was stopped by a new convention in Vitichevo - in 1100. Svyatopolk, Vladimir Monomakh, Davyd and Oleg Svyatoslavich established a new world. Davyd Igorevich became the victim - he was deprived of Vladimir-Volynsky (Svyatopolk's son Yaroslav was put there). In return, Davyd received from Svyatopolk the townships Buzhsky Ostrog, Duben, Chartoryysk and Viru (monetary reward). Later Davydu gave another Dorogobuzh. In addition, they offended the blinded cornflower. He was apparently considered incapacitated and deprived Terebovlya, offering to go to his brother or to Kiev. However, Rostislavichi refused to fulfill this requirement, and Vasilko Rostislavich remained a Terebovalski prince until his death.