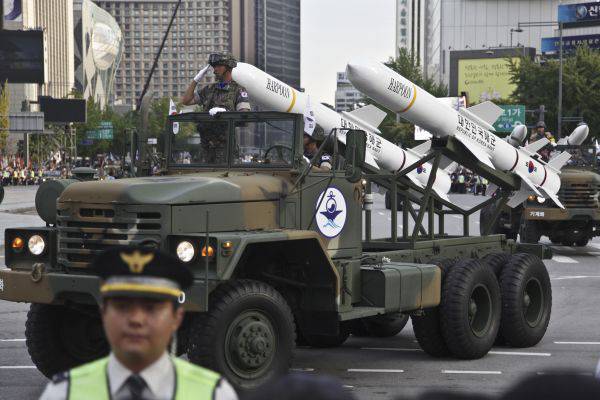 “In words, no, in fact, most likely yes, the Korean media described the recent actions of the South Korean government, which, according to journalists, seemed to succumb to Washington's persuasion and agreed to participate in the US global missile defense system. At least, the Ministry of Defense of the South intends to purchase exactly those missiles that are key components in the case of Seoul’s joining the missile defense system to the US Officials of South Korea, however, deny this, claiming that this is only a matter of creating exclusively ABM is not a member of the global anti-missile of the United States network.


Recall that recently South Korea announced its intention to complete the creation of the Kill Chen system by 2016, which will be intended for strikes against North Korean missile targets. By the beginning of the 2020-ies, the South is going to create its own missile defense system, which is abbreviated KAMD. The United States, as far as we know, is calling for Seoul to participate in the global American missile defense system, as Japan has already done. However, this is guaranteed to encounter a negative reaction from the main trading partner of Seoul - China. Definitely it will cause concern and Russia.

New speculations about the possible accession of South Korea to the US missile defense system arose when it became aware of the intention of the government of the South to buy Lockheed Martin's Terminal High Altitude Area Defense (THAAD) missiles for its missile defense. Experts immediately noted that these missiles are exactly what is needed if Seoul decides to enter the global US missile defense network.

For the sake of justice, it should be noted that Seoul did not directly mention the procurement of THAAD missiles. "The military department is exploring various opportunities to improve the ability to neutralize the North Korean missile and nuclear threat," said South Korean Defense Ministry spokesman Kim Min Sok, adding that this is about improving the capabilities of the Korean missile defense system. Meanwhile, another military source, on condition of anonymity, said that the Air Force would soon turn to the General Staff of the South Korean armed forces with a request to buy missiles "equivalent in their capabilities to the American THAAD." In addition, the vice president of Lockheed Martin confirmed that Seoul expressed interest in acquiring the THAAD complexes.

As military experts explain, at the moment, Seoul intends to create its missile defense system, focusing on the introduction of the PAC-3 Patriot systems, which will replace the PAC-2 currently in service with Korea. However, even with the PAC-3, there are some doubts about their effectiveness. Having an effective ceiling of no more than 30 kilometers, they can hit enemy missiles in close proximity on approach. If the missiles were supplied with nuclear or chemical warheads, even downed missiles could damage South Korea. In this regard, Seoul and interested complexes THAAD, which have a ceiling already up to 150 kilometers. Thus, the South Korean missile defense system would have two echelons of defense - more distant, with THAAD missiles, and a neighbor with the PAC-3.

There were also rumors that South Korea is going to buy SM-3 missiles for the sea-based missile defense component. If this were confirmed, it would have turned out that the South creates a system both on land and at sea, which coincides with the US missile defense system.

All these suspicions and rumors were hurriedly categorically refuted by South Korean Defense Minister Kim Gwan-jin. Over the past couple of days, he has said several times that Seoul "does not intend to join the US missile defense system." He also added that South Korean missile defense in its tasks is fundamentally different from what the Americans want. The minister recalled the "astronomical value" of such participation in the global US initiative. He refuted and rumors about the purchase of SM-3 missiles.

Nevertheless, a number of experts and deputies suspected that the South Korean government did make a deal. The South is keen to postpone the transfer of command over the combined forces on the Korean Peninsula to a later time. According to the logic of Seoul, he is not yet ready to take command. The United States also declared the need to transfer to the end of 2015 of the year, but more recently for some reason they decided to yield to the Koreans. In this connection, suspicions arose that there was a “command in exchange for missile defense” deal: Seoul gets a deferment on the transfer of command, and instead joins the American anti-missile system.

However, while officials unanimously refute these speculations. The media and a number of experts state: recently, one after another, there is evidence that the South, saying no to the US missile defense system, in fact, is gradually creating its missile defense system that can be easily integrated into the American one. And all this rhetoric, which categorically denies the fate of the United States, is aimed only at not getting angry with China, which, if desired, can bring South Korea a lot of trouble.

Ctrl Enter
Noticed oshЫbku Highlight text and press. Ctrl + Enter
We are
Seoul equips its new naval helicopters with Israeli Spike missilesUS and South Korea will deter DPRK
22 comments
Information
Dear reader, to leave comments on the publication, you must to register.