Ukrainian Navy will write off nine ships due to unsuitability 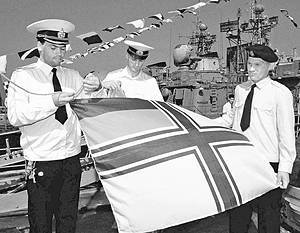 The Cabinet of Ministers of Ukraine decided to write off nine ships that are part of the country's naval forces, due to their technical unsuitability, said Ukrainian Defense Minister Pavel Lebedev.


"It was decided to write off nine ships that are more than 20 years old and that are in technically unusable condition," said Lebedev, reports Zn.ua.

The minister added that one of these ships is a combat one, 1977 of the year of release, the rest are boats and vessels.

Note that in 1997, when the partition of the Black Sea fleet of the former USSR, the Ukrainian Navy transferred 43 warships, 132 ships and boats, 12 aircraft and 30 helicopters.

To date, the Ukrainian Navy includes more than 25 warships and boats, more than 50 support vessels and about 30 units aviation techniques.

Ctrl Enter
Noticed oshЫbku Highlight text and press. Ctrl + Enter
We are
"Sredne-Nevsky Shipbuilding Plant" launched the raid minesweeper "Alatau" for the Navy of KazakhstanCentenary Rescue Ship "Commune"
106 comments
Information
Dear reader, to leave comments on the publication, you must to register.