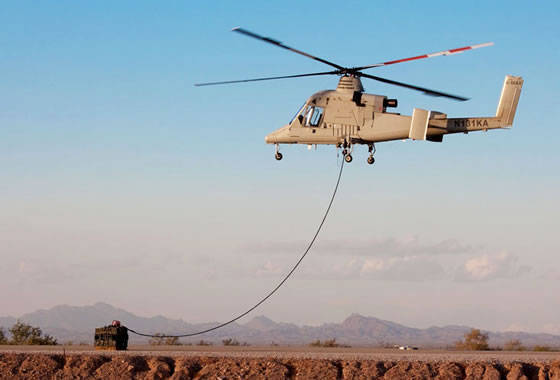 The US ground forces are considering the purchase of unmanned aerial vehicles (UAVs) of the K-MAX helicopter type as a budget platform for transporting cargo.


At present, a group of experts is finalizing a report on this issue for the command of the Ground Forces, reports the International Defense Review.

Since November 2011, two K-MAX UAVs have been used to transport cargo in the interests of US KMP units in Afghanistan and have received positive feedback. The originally planned deployment of K-MAX UAVs for 6 months in Afghanistan was then extended indefinitely.

According to the US KMP, the K-MAX UAVs are an effective means of logistic support and allow you to avoid personnel losses due to ambushes and explosives of improvised explosive devices during the transportation of goods by convoys.

In Afghanistan, UAVs are used to deliver food, ammunition, spare parts, and other equipment to the advanced facilities of the US CMP. Predominantly, the K-MAX UAVs fly in the dark, which makes it possible to better utilize the subtle characteristics of the vehicle and to avoid intensive daytime air traffic.

In the high mountains of Afghanistan, UAVs carry loads weighing no more than 4000 pounds. K-MAX usually transport loads on an external sling, which allows personnel on the ground to attach loads to a machine that is in hover mode.

The shipping capabilities and high reliability of the K-MAX UAVs demonstrated at the Afghan theater of operations attracted the attention of US NE.

Evaluation of the profitability of the use of UAVs is carried out in the framework of the program of the US Department of Defense “autonomous technologies for unmanned systems” ATUAS (Autonomous Technologies for Unmanned Air Systems).

The three main areas of the ATUAS program are: the development of a helicopter-type unmanned aerial vehicle capable of autonomously bending around areas that are prohibited for flight (including those zones that were already declared to be banned during the flight of the UAV); ensuring the possibility of autonomous selection of cargo without the involvement of ground staff; operations by a convoy of several unmanned helicopters.

Tests of the K-MAX prototype UAV as part of the ATUAS program are planned to be held in the United States before the end of this year.

At present, Lockheed Martin has transferred four K-MAX helicopters for conversion, three of which have been modified to the unmanned version, and one is in production. The company plans to receive three additional helicopters for retrofitting, which will ensure the potential initial requirements of the ground forces or an additional order from the USMC.

Although the assembly line of the K-MAX helicopters was stopped a few years ago, the equipment is in storage and the assembly of machines, if necessary, can be resumed within nine months.

Despite the cutback in the budget of the US Department of Defense, developers are counting on receiving additional orders for K-MAX UAVs from the Marine Corps and the US Army.

As TSAMTO has already reported, in March 2007, the companies Kaman and Lockheed Martin signed an agreement on the formation of a joint venture for the development of the K-MAX UAV.

In December, 2010 of the year, the USCM concluded a contract with XKUMUM million for the delivery of two UAVs and three control stations, demonstrating their ability to deliver goods to units operating in extreme conditions and at high altitudes, with the K-MAX Tim consortium.

After the five-day tests conducted in September on 2011 in the USA, the UAVs were found to be able to be tested in Afghanistan. According to the results of testing in the Afghan theater, it is planned to decide on the future of the project.

The UAV is based on the K-MAX manned helicopter. The maximum take-off weight of the device (with external load) is 5443 kg. It is equipped with a Honeywell gas turbine engine T5317A-1 with a power 1800 hp, a unique system with two rotors of opposite rotation and does not have a tail rotor. With the speed of 148 km / h, this design allows transporting up to 6 thousand pounds (2720 kg) of cargo at sea level and to 4 thousand pounds at height of 15 thousand feet.

The maximum range of a UAV flight is 1852 km, the flight range with an external load is 396 km. The UAV is adapted for use in high-altitude and hot climates, it has a low noise level.

Ctrl Enter
Noticed oshЫbku Highlight text and press. Ctrl + Enter
We are
Planned Navy Replenishment in 2015Shipping to Shore (Development of a new vehicle for the US Marine Corps)
15 comments
Information
Dear reader, to leave comments on the publication, you must to register.