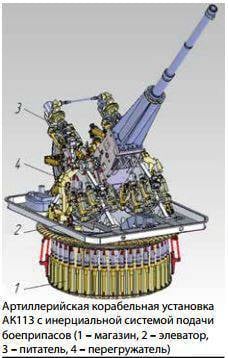 The Arsenal machine-building plant (St. Petersburg), according to its corporate newspaper, is currently taking the initiative in developing a new artillery system. According to the newspaper Arsenal, employees of OKB No. 159 under the direction of P.I. Nemirovsky created the AK113 naval artillery mount of 100 mm caliber. The new project is a further development of the already used fleet AK-190 artillery mounts and is designed to solve some problems of these systems.


According to the corporate newspaper of the enterprise, the main purpose of the AK113 project is to create a modern artillery installation for ships of the navy, which in its characteristics will not be inferior to the existing AK-190 system. At the same time, it is required to ensure reliable operation of various units of the installation when firing with a maximum rate of up to 80 shots per minute. When testing and operating the previous AK-190 artillery system, some technical and structural problems were identified that did not allow firing at the maximum rate. Employees of the design bureau of the Arsenal plant intend to solve this problem.

As far as can be judged from the available data, in the AK113 project it is supposed to use the artillery part of the AK-190 installation without any significant modifications. All innovations and new units will be used only in the system of supplying ammunition to the gun. The ammunition system, according to the Arsenal newspaper, will be built according to the so-called inertial principle. This means that all components of the projectile delivery system will interact with the ammunition without subjecting it to overload. In other words, the ammunition system will carry shells continuously and with minimal changes in speed or direction of movement. It is expected that a similar approach to the provision of ammunition for the gun will reduce the load on various elements of mechanics and, as a result, reduce the likelihood of any breakdowns.

The first information concerning the architecture of the original ammunition supply system has already been published. As in the case of the AK-190 artillery installation, which served as the prototype for the AK113, the new complex will store ammunition in underdeck. There it is proposed to place the drum shop on the 94 mm unitary projectile caliber 100 mm and part of the mechanisms for supplying ammunition to the gun. The store will be equipped with equipment that allows you to determine the type of projectile, located in a particular cell, and submit the desired ammunition to the gun. It is proposed to search for a projectile of the desired type using a contactless monitoring system and angular position sensors associated with the magazine drive. According to reports, from the store shells will fall on one of the two chain-type elevators, designed to lift the shells on the loading line. Further, two material handlers will transfer shells to feeders made in the form of carriage conveyors.

Some interesting conclusions can be made from the existing description of the principle of operation of the ammunition supply mechanisms of a promising artillery installation. Thus, the use of two elevators, two loaders and two feeders directly speaks about the use of a double ammunition supply system. Similar loader systems have already been used on previous models of naval artillery mounts. This system architecture reduces the load on each of the "sets" of projectiles, as well as increase the rate of fire due to the alternate supply of ammunition by both systems. In addition, the declared movement of ammunition with minimal acceleration, without sharp shocks and shocks, will minimize or even eliminate the occurrence of any significant loads on the projectile loading and loading mechanisms.

In general, the AK-190 artillery gun improvement project, by drastically updating the ammunition supply systems for the gun, looks promising. However, it will be possible to speak about the actual capabilities of the AK113 system only after it passes the tests. At one time, the AK-190 installation was also considered promising and successful, but a number of problems were identified during the tests, which did not allow the design rate of speed and reliability to be achieved.

The estimated construction time of the prototype of the new artillery installation and the approximate time of the beginning of its tests have not yet been named. There is reason to believe that the project will soon be ready for implementation in metal. According to the chief designer of the AK113 system P. Nemirovsky, the development of the project took about one and a half years. Thus, the project may be in the final stages of preparing the documentation necessary for the construction and testing of the prototype.

Ctrl Enter
Noticed oshЫbku Highlight text and press. Ctrl + Enter
We are
The cruisers of the 68 bis project: the Sverdlov missions in the post-war fleet of the USSR. 3 part"Svetlana". History of creation
12 comments
Information
Dear reader, to leave comments on the publication, you must to register.