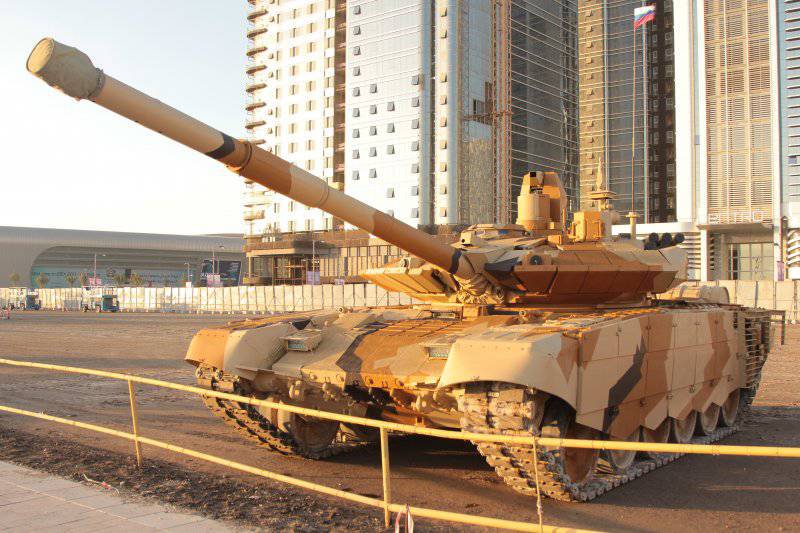 A mandatory element of equipping modern foreign tanks in recent years, the commander’s panoramic sight has become. This device provides all-round surveillance and guidance. weapons on target. Combining the functions of the observation device and sight, such systems can significantly improve the combat capabilities of tanks. With the help of a panoramic sight the tank commander can fully control all the processes necessary for firing. However, despite all the advantages, such sighting equipment has not yet become a common component of electronic equipment for tanks of the armed forces of Russia. Unfortunately, at present, Russian tankers have to use different devices for monitoring the situation and pointing weapons.

In recent years, the domestic defense industry has created several tank fire control systems (SLA), which include panoramic sights. At the moment, tanks with similar equipment are not supplied to the troops, but in the near future the situation may change. Thus, in some sources it is mentioned that the T-72B tanks, in the course of repair and modernization, will receive a new modification of the Kalina fire control system, equipped with a panoramic commanding sight. 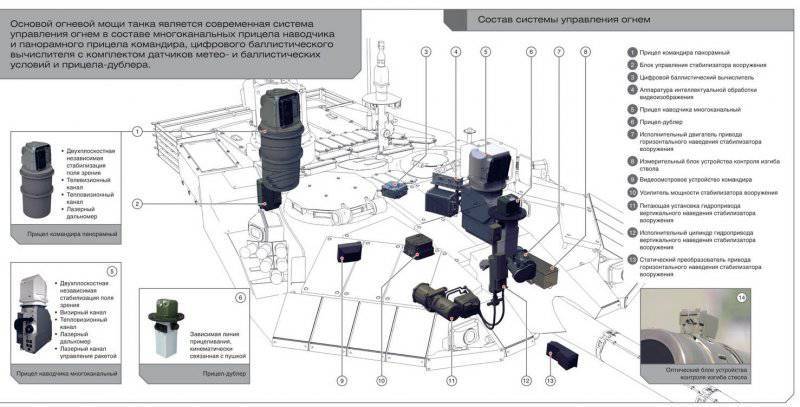 The base version of the “Kalina” vehicle is used on the newest domestic T-90MS tank. The system architecture and its individual elements were created taking into account the need for combat work at any time of day in any conditions. The main method of meeting such requirements is the use of modern multi-channel sighting devices. Thus, the commander of the T-90MS has a new panoramic sight of the PAN Hawkeye PC model. The sight has a two-plane independent stabilization of the field of view, two optical channels (television and thermal imaging) and an integrated laser range finder. Due to this, the commander, if necessary, can take over the work of the gunner.

It should be noted that the high characteristics of the Kalina LMS are achieved not only with the help of a panoramic sight. In addition to this device, the fire control system includes the multichannel gunner sight PNM Sosna-U (it has the same functions as the commander's, but it is equipped with an anti-missile laser control system), a double-sight, a digital ballistic computer, video signal processing equipment , weapons stabilizer, tactical link information management system and a number of other equipment. An interesting feature of the new fire control system is the relatively small dimensions of its individual elements and the significantly reduced number of controls. The last feature of the Kalina SUO facilitates crew training and combat vehicle operation. 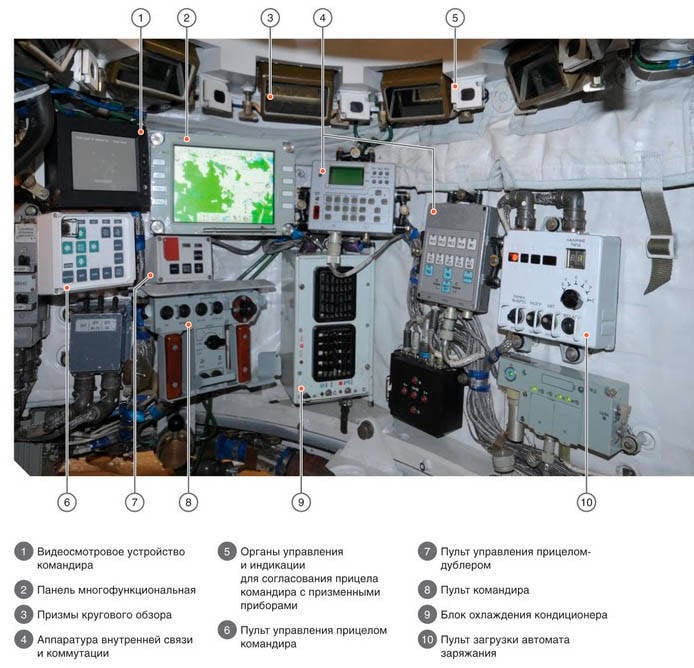 At the time of its creation and up to the present, the fire control system Kalina was and remains one of the best complexes of its class in the world. Moreover, in some respects, the newest domestic MSA may surpass the recent foreign developments.

The predecessor of the “Kalina” LMS can be considered a similar “Redoubt” system created in the mid-nineties. As in the case of the later system, the Redoubt project was designed to equip tanks and other armored vehicles and increase their combat potential. One of the ways to improve the performance of armored vehicles with the OUT “Redoubt” was the inclusion of a commander in the last panoramic sight. This device allows you to monitor the situation and direct gun armament. Commander sight is equipped with a system of stabilization of the visual field. To detect targets and determine the distance to them, the commander of a combat vehicle can use a television channel and a laser range finder. Thermal equipment is absent.

The absence of a thermal channel in the panoramic sight of the OCS Redut is compensated by its presence in the gunner's sight. Like the commander's device, the gunner's sight is equipped with a system for stabilizing the field of view and a laser rangefinder. At the same time, the gunner of a combat vehicle equipped with the OUT “Redoubt” can monitor the situation and attack targets not only during the day, but also at night, using only the sighting equipment available at its workplace. Both sights of the Redut system can interact with the weapon stabilizer in eight modes. This ensures both the independent work of a crew member and their joint actions.

The fire control system "Redoubt" in the course of several tests showed its high characteristics and found application in armored vehicles. Thus, this MSA was used in projects for the modernization of infantry fighting vehicles BPM-2 and BMP-3, and was also offered for installation on the combat vehicles of the BMD-4 landing force. In addition, in the first half of the last decade, the Indian military expressed a desire to familiarize themselves with the Russian development and even conducted tests of a tank equipped with the Redut system.

All the latest domestic fire control systems for tanks and combat vehicles of other classes are faced with the same problem: the prospective main customer represented by the Russian Ministry of Defense has not shown any interest in them for a long time. The reasons for this are not completely clear. Assumptions about the reasons that the newest MSAs were not installed on new and modernized tanks concern the lack of funds from the military department, some technical problems or inerrancy of responsible persons. Regardless of the specific reasons, at the moment Russian tank forces do not have equipment with modern fire control systems equipped with panoramic sights. 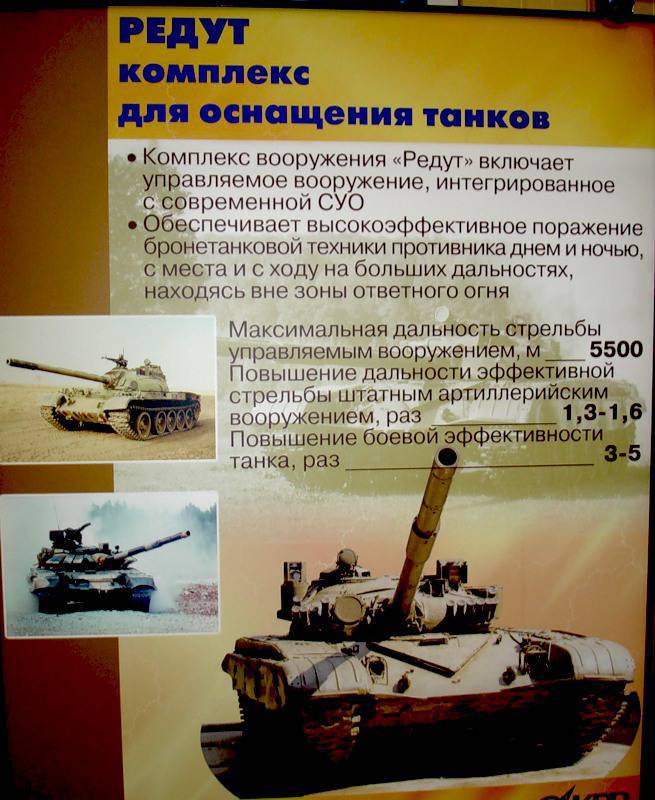 However, in the near future the situation should change and the existing tanks in the troops will receive modern electronic equipment. In addition, the new main tank, created under the Armata project, is expected to be equipped with the latest fire control system, which will include the newest domestic developments in this area.

Ctrl Enter
Noticed oshЫbku Highlight text and press. Ctrl + Enter
We are
Middle tanks in the postwar period. "432 Object"The fire control devices of the Soviet and German tanks of the Second World War. Myths and Reality
191 comment
Information
Dear reader, to leave comments on the publication, you must to register.