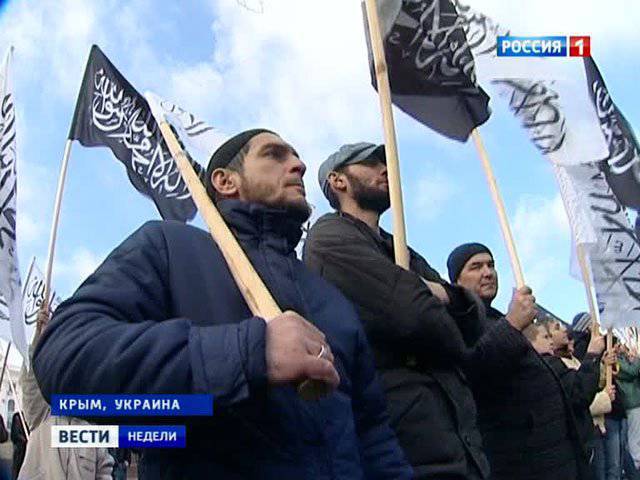 In the 14-15 centuries on the Crimean peninsula there was a strong and powerful Crimean Khanate, which arose on the ruins of the Golden Horde. Until now, the great interest of tourists is the capital of the Crimean Khanate - Bakhchisarai. The majority of the population of the Khanate were Tatars. Besides them, Armenians, Greeks, Jews, Slavs and Germans found refuge in the Crimea. Crimea has become the largest center of Muslim civilization. It was from here that the Islamization of the peoples of the North Caucasus was conducted. But in the 18 century, the Russians conquered the Crimea, which caused a mass exodus of the Tatar population from the Crimea to Turkey. In 1783, the Crimean Khanate disappeared and its place was taken by the Russian Tauride province. And although Crimea became Russian territory, there were about 1500 mosques and dozens of madrasahs on the peninsula. At the beginning of the 20 century, the Tatars lived compactly in the Crimean cities and towns. For example, in Simferopol there were about 8 thousand, in Evpatoria - 6 thousand, Theodosia - 3 thousand, and in Bakhchisarai - 10 thousand. The number of mosques also fell to 729.

A significant part of the Crimean Tatars gladly accepted the arrival of Germans in Crimea in 1941. These Tatars created Muslim committees supporting the German occupying power. The same Tatars participated in the raids to destroy the partisans. Muslim committees also formed volunteer units.

After the war, the peninsula became actively settled by Russians and Ukrainians. All traces of the Tatar-Muslim civilization were destroyed. By 1980, not a single mosque has been preserved. Unfortunately, as a result of such active destruction, thousands of ancient manuscript books from the oldest madrasa of Bakhchisarai were lost. And not only - all the books in the Tatar language were destroyed.

In the 1990s, the return of the Tatars to the Crimea assumed an irreversible and avalanche-like character. And although this return was not welcomed by the population of the Crimea - no one could stop this process. Many Crimeans discussed the behavior of the “activists” of the Tatar communities who were engaged in self-capture of land, the construction of mosques, and speculation with their nationality during the redistribution of property. And although the word "jihad" has not yet become the Crimean "horror story", but Islamic radicalism may soon become the Crimean reality.

This forecast is more likely to be fulfilled, since, according to some experts, the statehood of Ukraine is weakening, the country is no longer able to respond to new challenges. And such a challenge is the activation of the activity of the Islamic Liberation Party - Hizb ut-Tahrir on the territory of Crimea. Possessing powerful media capabilities, the party became the vanguard of an ideological offensive, the goal of which is the idea of ​​creating a world caliphate. Many countries, including Russia, banned the activities of Hizb ut-Tahrir, and although it functions quite legally in Ukraine, supporters of the caliphate began to act on behalf of the local Muslim community, Davet.

People’s Deputy of Ukraine L. Grach believes that Hizb-ut-Tahrir organization, in due time, helped V. Yushchenko to come to power. And this led to an increase in the threat from Islamic formations during the reign of this politician.

R. Kadyrov in one of their interviews with the central Ukrainian newspaper said: “You have more Wahhabis than in Chechnya. Very many fanatics come to us through your country. And if you do not fight this phenomenon, tomorrow or the day after tomorrow they will do the same for you as they did in Chechnya. ”

Islamic activists do not meet with any opposition from the Crimean authorities, and often even find support for their actions from some local officials. As a result, dozens of Muslim communities appeared in Crimea: “Adet”, “Azamat”, “Iman”, “Davet” (Simferopol); Eski-Yurt (Bakhchisarai); “Minaret” (Evpatoria) and others. Along with the print media “Renaissance”, “Miras” and “Minaret” there are also electronic means of Islamization - the websites “Vilayat Crimea”, “Hizb-ut-Tahrir”, “Renaissance” and others

Ukraine is under the influence of a rather persistent illusion that it is far from world storms and keeps the situation in the country “under control”. The reality is much worse - the ongoing processes in the religious and social life of the country can at any time lead to uncontrolled splashes of violence and clashes on religious grounds.

The Islamists do not hide their desire to show strength - in Simferopol they came out with slogans: “A superpower was established in the world, which was a beacon of justice for more than 12 centuries. Our educational activities will have influence all over the world! The victory of Allah is near! ”

Foreign Islamic emissaries were also frequenting the Crimea, such as the leader of the British Muslim community, Mohammed Taji, and the Lebanese, Osman Bakhhash.

Security forces do not interfere in the activities of Muslim organizations, even though recently operatives in Simferopol, in one of the cellars of the Islamist headquarters, have found extremist literature and trotyl drafts.

At events held by supporters of the world caliphate, there is a recruitment of new associates. These meetings are guarded by the Muslim community’s own security unit, the “Sharia militia”.

On the Internet resources there is a lot of information about those Ukrainian Islamists who are involved in a military conflict in Syria. And although no one recognizes the presence of extremism in the administration of the Muslims of Crimea, one of the mosques of the Crimean village of Sara-Su recruited mercenaries to Syria. No one can even now say how the situation in Ukraine will change when these fighters, who have gained combat experience and who have access to world terrorist groups, will return home. It is unlikely that they will join the ranks of the labor resources of Ukraine, but they will be able to participate in various Islamist programs - and the bloody development of the situation is unlikely to stop them.

It is known that some Arab countries took patronage over the Crimea. And since then, traditional Islam has quickly become supplanted by radical. Officially, the Arab Cultural Center in Simferopol is engaged in cultural and educational work, including the study of the Arabic language and the basics of Islam. But Russian journalists are categorically not allowed in there, which means there is something to hide.

The Ukrainian authorities are trying to demonstrate to the world community their tolerance towards religious communities. Meanwhile, Al-Jazeera, which was involved in swinging the Arab Spring, is already showing films about the oppression of Muslims in the Crimea.

Ctrl Enter
Noticed oshЫbku Highlight text and press. Ctrl + Enter
We are
Russia, Turkey and the "Crimean Question"Crimean Tatars should not become "cannon fodder" in the Big Game against Russia
172 comments
Information
Dear reader, to leave comments on the publication, you must to register.