Where and why were the first Soviet coins minted

October 18 2013
44
Revolution is not the result of class struggle. Revolution is not an explosion of indignation, when the people's sufferings have exceeded any measure. Revolutions are a way to destroy one state by another. To cause an internal explosion in an opponent, weaken, crush, cause confusion and civil war. In the end - pick up a zone of influence of the opponent, his natural, material and human resources.


Is there an exception to this rule? There is. For example - the Cuban revolution, in which the external factor was absent. But all the revolutions in large countries, the main players on the geopolitical map of the world, always have a foreign origin.

And this “umbilical cord” is very often found in completely unexpected places. 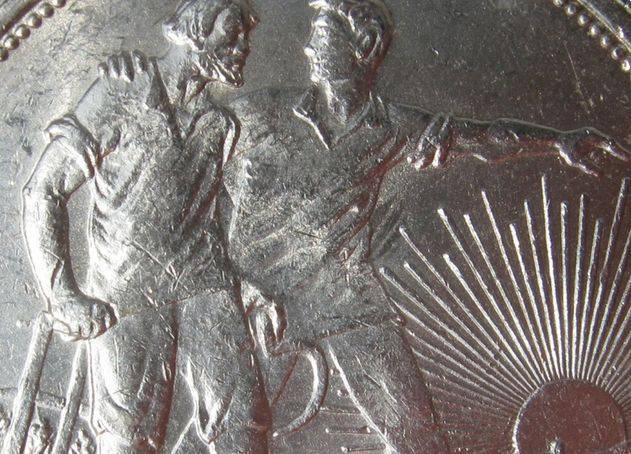 Do you know where the first Soviet silver coins were issued?

The money of the victorious capitalism of the proletariat.

“This silver fifty dollars 1924 of the year refers to one of the first Soviet coins. One fifty dollars is quite common, as it has a large circulation and a number of varieties. On one side is a blacksmith with a working tool. On the other side is the state emblem of the USSR, the inscription under the emblem “one fifty thousand dollars” and the circular inscription “proletarians of all countries unite”. When stamping used a variety of stamps and gurtovye inscriptions. Therefore, some coins are unique.

1. On the edge of the coin the letters PL are depicted - minted at the Leningrad Mint, PL - mintsmeister Peter Latyshev.

2. On the edge of the coin, the letters TR are depicted - coins were minted in England (Birmingham), TR - mintsmeister Thomas Ross. ”.

Proletarians were united on silver coins of the USSR, issued immediately after the civil war, in 1924 year. Issued at the Leningrad Mint and ... in England! That is, the proletariat released money in the most important capitalist state of that time.
But what about the principles? How is "the whole world of violence we destroy to the ground"?

Destroyed. By distemper and civil war destroyed the Russian empire, the main geopolitical opponent of the British Empire. The British liquidated their rivals by the hands of revolutionaries. Not only Russia, but also Germany, were erased with a “revolutionary eraser” from the world map.
And ardent freedom fighters continued to cooperate with their "patrons" already in peace life.

Are you surprised? In vain. Where will the Libyan and Syrian revolutionaries print and mint their money if they win? In London, in England. (Even the current Syrian money was printed in the UK. Colonial dependence is not a joke!)

So maybe in Russia in 1924, it was impossible to mint silver fifty dollars? Maybe in vain we sin on the "faithful Leninists"?
Not. Russia independently coped with the release of banknotes and coins. Tsarist Russia coped, and the Bolsheviks, as they won, stopped coping immediately?

So the Mint in the northern capital worked, but the “party and government” somehow ordered it to release less coins than the British “partners”: in St. Petersburg in 1924, 26 559 000 fifty-fifty was released, in Birmingham - 40 million pieces. http://savearmy.ru/50-kopeek-1924-goda/

Coins worth 50 kopecks minted in England today are distributed among coin collectors equally with coins issued by the Soviet proletarians themselves in St. Petersburg. Even judging by the fact that the cost of "English" coins on modern Internet auctions practically does not differ from the cost of fifty thousand rubles of domestic coinage, you can be sure that the circulation of the "English issue" was exactly the same.

My reader Sergey Gavrilov sent interesting information on this account:
“... It was supposed to place orders at other enterprises, in particular at the Tula and Odessa factories. But these proposals were not accepted. Orders for the minting of part of the circulation of fifty dollars and Pyataks placed in England ... ". (Shchekov AA Coins of the USSR: Catalog. - 2-e ed., Revised and enlarged. -M .: Finance and Statistics, 1989, p. 31).

This is the “dictatorship of the proletariat”. These are the "principled revolutionaries." They don’t give work to their proletarians; they don’t want to mint native Soviet coins in the country that won the exploitation of the people.

By the way, silver rubles were also minted in England, according to this link. http://www.tomovl.ru/money_poltinnik.html

(It’s not the fact of the release of certain USSR coins in England, but the very fact of such a situation. It’s very characteristic and indicative.) 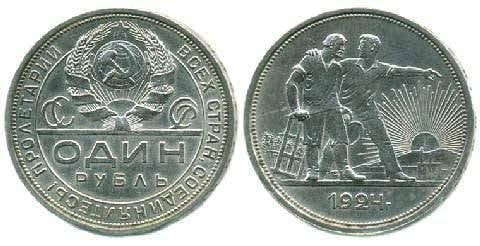 Look at the coin. Everything is as it should be: the worker embraces the peasant and points to the rising sun of freedom.

Did freedom for Russian peasants and workers in the 1924 year soar up in the West? In London? For workers and peasants there is not, but for revolutionaries of all stripes it never entered London. All who struggle with Russia always know: from London, as from the Don - there is no issue.

And thieves flee, political adventurers and just oligarchs in Albion ...

... The reason for the release of Soviet money in England was political, not economic. There is no need to be surprised - Comrade Trotsky, a direct protege of the banking backstage by this time was the most influential politician in the USSR. Stalin was just beginning to fight with Trotsky, which would end with the expulsion of Lev Davydovich, first in Alma-Ata, and then outside the country in 1929. An amazing thing - at the same time, the government of the USSR stopped the work of all the concessions, which for a penny exported the resources of our people to the West.

The Soviet Union did not order more coins from the “British partners”.

... And we, after all, didn’t even now discuss where and to whom the “revolutionaries” sent gold and jewels immediately after October. Through the Swedish banker banker Olof Ashberg. 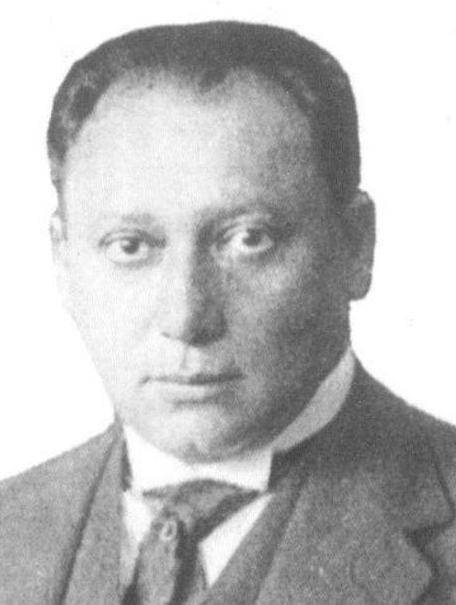 Which, after the final victory of the Bolsheviks (about a wonderful coincidence!), ... became the first Soviet banker. Olaf Aschberg headed the first commercial (!) Bank in a Soviet country - Russian Commercial Bank in 1921. You can read about it quite openly today on the VTB website, because VTB is the “heir” of the bank where Comrade Olaf Aschberg worked.

Do you still have questions, why was the revolution made?

And if those who made the 1917 revolution of the year, in many ways ideological people, were so closely connected with the bankers of London and Washington, then what can we think of those who are “fighting for freedom” today? And he walks quite openly at the US embassy, ​​openly receiving funding from Western funds ...

Ctrl Enter
Noticed oshЫbku Highlight text and press. Ctrl + Enter
We are
Dzizyasatsu, sukubasatsu and "God's money" ...Paper pennies and rolls of rubles
44 comments
Information
Dear reader, to leave comments on the publication, you must to register.