Zombies of our time

October 21 2013
155
Over the past ten years, about thirty thousand people have died from the drug desomorphine (aka the “crocodile”) in Russia. By prevalence, he ranks second after heroin. Crocodile has gained popularity due to the cheapness of codeine-containing components and their relative availability. Only since June 2012, the sale of codeine-containing drugs without a prescription in Russia has been banned. The lifespan of someone who is addicted to desomorphine is about two years old. People rot alive, literally spilling into pieces. They can be called the walking dead. 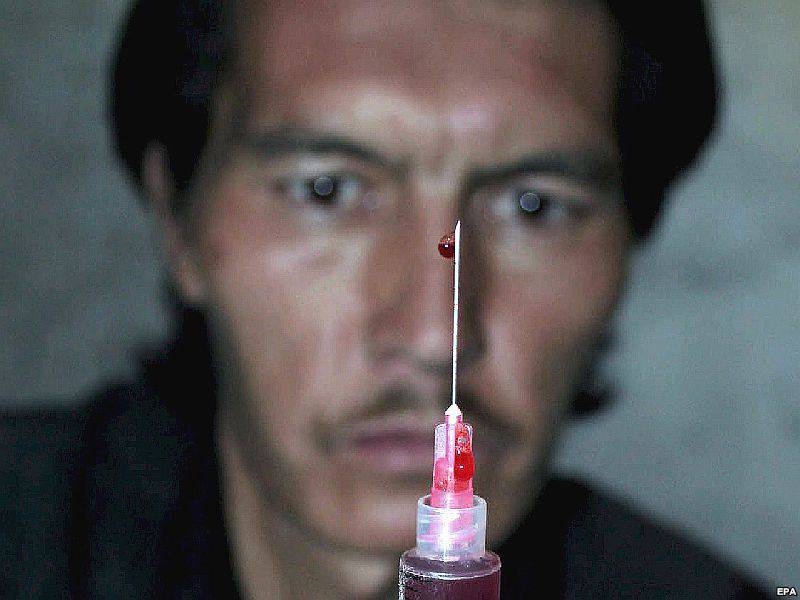 At school, children dream of a happy and long life. They want to become pilots, heroes, doctors, writers, famous artists, artists, ship captains, or learn seven foreign languages. There are no children among those who dream of a “career” of an alcoholic, vagabond or drug addict.

But childhood is over. It is time for youth, youth. Life somehow did not work out. This is due either to poverty, or a bad quarter with a bad company, or bad educators and teachers, or genes, or both. As a result, someone goes to jail, and someone to the needle.

More than two years ago, the head of the Federal Drug Control Service, Viktor Ivanov, said that almost two thirds of pharmacy codeine drugs are bought by drug users. The growth in sales of these drugs is absolutely correlated with the growth in the number of annually eliminated drug addicts engaged in the processing of these drugs into desomorphine, quoted Ivanova RBC. In some regions, up to 90% of newly discovered drug addicts are desomorphins.

Reports from the newspapers of our time can drive you crazy.

In the center of Lipetsk police closed the drug addiction in which the potion was prepared. Several syringes were filled and ready to use. Guards found a bottle with the remnants of codeine, iodine. There was a stench in the apartment.

Rђ RІRѕS, message from Azov. The anti-drug commission summed up the 8 work months. Only during these months was 26 drug addicts closed.

From Tolyatti writethat against Ekaterina Shvyrevoy initiated a case under article 232 of the Criminal Code of the Russian Federation (organization and maintenance of a den for the consumption of narcotic drugs). Desomorphine was found in her apartment.

News from Cheboksary: ​​a young resident of the southwestern region was accused of illegally manufacturing and storing desomorphine without a sales target.

And so on and so forth.

In 2013, the crocodile is successfully mastered by the United States.

Becky Evans and Anna Edwards ("Daily Mail") write that, despite reports of the spread of the "carnivorous crocodile" throughout the United States, the anti-drug agency refuses to view it as a serious threat to America. Meanwhile, the appearance of the drug in the United States had been feared since 2011, when an official from the Drug Enforcement Administration announced that his department was aware of the overseas crocodile. And nevertheless, even knowing about the cases of medical intervention, which have been publicly announced by the doctors, the DEA now declares that it is not ready to recognize these cases as a direct threat.

Journalists describe the "side effects" of desomorphine as gangrene, decay, and finally, the exposure of the bones. It all starts with the peeling of the skin - hence the name of the homemade drug.

Today, doctors fear the epidemic spread of this cheap heroin replacement in the United States.

The first use of the drug was recorded in the United States in Arizona in September. Later it became known about three cases in Chicago.

Doctors warn about horrific side effects: damage to blood vessels, muscles, cartilage, bones. In the end - amputation. Often this is the only way to save a patient’s life. Rotting flesh occurs directly at the injection site.

The article also indicates that 2,5 of a million people registered in Russia, who applied for medical assistance due to the use of this drug, are registered in Russia. In the 2011 alone, the Federal Drug Control Service of Russia confiscated 65 million doses. Desomorphine is three times cheaper in production than heroin, say journalists. The drug is especially prevalent in Siberia and the Far East of Russia; dependent growth is marked with the year 2002. The number of desomorphins-Russians, experts believe, has tripled in the past five years.

In a report by Will Payne ("Daily Mail") from the city of Dzholet, Illinois, tells about the sisters Amber and Angie Neitzel, who used the “toxic cocktail” from Russia for a year and a half.

The sisters claim that at first they had no idea that they were using a “crocodile”. They thought it was an ordinary heroin. At the same time, the sisters said that they preferred the new drug because it cost a tenth of the heroin price. In addition, the drug gave an incredibly high thrill.

After weeks after the transition to the "crocodile" sisters appeared disgusting ulcers on the legs and arms. A few months later, 29-year-old Angie felt so bad that she was taken to intensive care unit at night with terrible stomach pain: she was convinced that she was dying.

Both sisters were treated by Dr. Abhin Singla. This man decided to speak about the problem of "crocodile" after a few weeks saw five cases in his small city hospital. Both sisters signed special medical forms, thereby allowing the doctor to tell the general public about their cases. The doctor said the following about the drug:

“The effect is worse than any that I have ever seen from any drug in all the years of my practice. He makes addicted and deals damage instantly. "

The doctor expects to see a lot more addicts in the coming months. He believes that the drug will be distributed in the United States.

“I really don’t know how to stop it, the law enforcement agencies should start it. There were already a number of cases throughout the country, and now something has to be done. ”

On Friday last week, DEA spokesman Jack Riley finally issued a statement about the department’s concern about the crocodile. He said that agents and policemen are trying to find dealers on the streets and to find "some clues".

The sisters told about their sad fate precisely so that the “crocodile” epidemic was stopped. And their doctor believes that every child should see the warning of Amber and Angie.

As for Russia, the Federal Drug Control Service believes that the restrictions imposed on the sale of codeine drugs have improved the country.

As in January, 2013 reported “Russian service“ BBC ”, V. Ivanov, Director of the Federal Drug Control Service, speaking about the results of the fight against desomorphine, said that the ban on over-the-counter sales of drugs containing codeine led to a "phenomenal recovery" of Russian society. Ivanov said:

“According to the results of our work for six months, the market for desomorphine decreased by 10 times. The number of drug accidents has been halved. ”

The BBC also notes that Russian human rights activists have repeatedly called the introduction of recipes an imitation of the fight against drug addiction. This imitation supposedly harms patients who need codeine.

As for the “phenomenal recovery,” we note in conclusion, oh, how far it is to Russian society. This is eloquently indicated by the number of drug users who continue to be closed by law enforcement officers (see the beginning of the article).

People! Remember your school dream. Do not change it to desomorphine. Who do you want to be - a man or a zombie?

Ctrl Enter
Noticed oshЫbku Highlight text and press. Ctrl + Enter
We are
Even pigeons in Donetsk dream of peaceRussia against drug barons
155 comments
Information
Dear reader, to leave comments on the publication, you must to register.