October 18 2013
36
October 7, on his birthday, Vladimir Putin was going to meet on the margins of the APEC summit with Barack Obama. But the crisis in his country prevented him from coming to Indonesia.


Did the efforts of our diplomacy really save Syria from the attack of the West? What is more necessary for America now - a new war in the Middle East or a partnership with Russia? And how strong is Russia itself to play a key role in global politics? We talked about this with the famous TV presenter and publicist Mikhail Leontyev. By the way, October 12 to our interlocutor and author of sharp speakers in AIF marks 55 years.

Mikhail Leontyev: She is not faster, but absolutely alive! We already have a completely different Armed Forces than 5 years ago. Some aircraft purchased for the army more than 600. Only the United States and China are purchasing more ... Yes, the rearmament program comes with tremendous difficulties, with a screech. But the defense industry is the only thing that lives in spite of that macroeconomic policy, which I consider completely Jesuit and moronic.

What's happening? It seems that the pests are in the government! In a crisis, overestimate the price of the loan, reduce liquidity, wildly overestimate the rate of the national currency can only crazy. In the world, zero rates, we have destroyed the loan market, the loan is available only to privileged recipients. With inflation we are struggling with monetary methods, although this is the inflation of costs that monopolists generate. In Russia, an insane exchange rate policy: if you have a real exchange rate of the ruble with an open economy increases 4 times, you do not need anything else to strangle your own industry.

Russia is still the largest exporter of hydrocarbons. So far, because soon the shale will make such an exporter the United States. But our domestic gas prices are already higher than American. Electricity prices for industry in 3 increased by 80%. We do not have a single department that would be responsible for the competitiveness of the economy! And she falls. And the government arrogantly, shamelessly lies about the "exhaustion of sources of growth." Revenues are declining - it is necessary to cut expenses, and the paw is pulled towards the only source of growth and modernization - towards the defense industry.

While it is possible to somehow defend. The political leadership has an understanding that this is the only working mechanism of growth, and qualitative growth ... After all, we in the defense industry have already created even what the Soviet Union could not. The Bulava missile, for all its problems, will definitely be brought to the end, and this will be a strategic containment resource for 40-50 years. Next is the 5 generation fighter. Today, only two countries in the world - the United States and Russia - can make such planes ... I would pay attention to the words of Dmitry Rogozin: he said that one of the main goals of huge investments in the defense industry is the development of new technologies, which will inevitably flow over on the citizen. That, in essence, the purpose of the State Arms Program is the new industrialization of Russia. 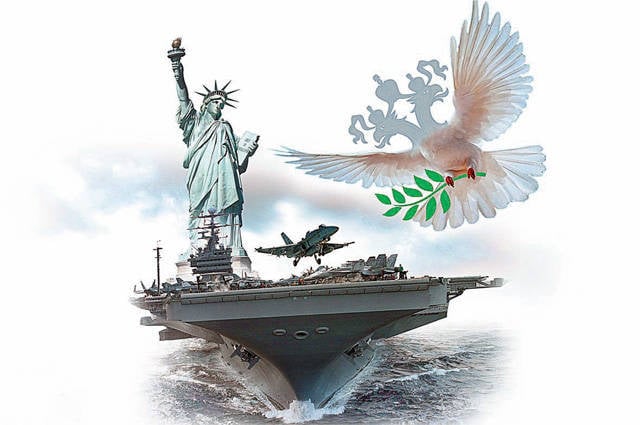 - Let's move from our defense successes to diplomatic. The intervention of the West in Syria, the efforts of Russia finally pushed?

- The intervention in Syria is ongoing. All neighboring countries, including Israel, are the source of such intervention. And it's not just about supplying weapons and training militants. We are talking about the actions of special forces that work there - all know this.

But direct external hits are really pushed back. The agreement reached on the chemical disarmament of Syria is rightly perceived as Russia's foreign policy triumph. And then everything played a role - both our military-technical support of Syria, and our significant presence there fleet, and, by the way, the state of our Armed forces. A country that does not have its military potential does not have foreign policy triumphs by definition!

The situation with the United States has changed. With all the tremendous pressure of the cargo of the former American geopolitics, Obama, in general, is looking for a reason to refuse it. He understands the responsibility for the preservation of the country, and the country is burdened with unbearable obligations to maintain its total domination. And the only way for America to get out of the systemic crisis, in which the American model of the world is, is to negotiate. And America is ready to negotiate for the first time in many years. And with Russia, and with Iran. And with whom else to negotiate with her in the region, where it is necessary to stabilize the situation? Not with Qatar! Qatar can be simply closed with an order from British Petroleum - like some factory ...

- As far as a strike on Syria is still likely?

- It is possible at any time. First of all, Obama is very vulnerable in his policy: America is in a rather difficult condition, his desire to demolish is immense. And provocations against Assad are almost inevitable. Even no new charges will be required: Assad has already been declared a villain. And this is a problem. America is a totalitarian ideological country, if Assad was declared a villain, they cannot refuse it. Although there was almost no more adequate, restrained, tolerant, and European-educated politician in the region. He will be more tolerant than Merkel or Cameron ...

- Do you understand the logic of the Americans? They are fighting with Al-Qaeda together with the Syrian authorities - the one who showed America the gospel of 11 of September 2001. Not bad, sorry, Washington to make an alliance with the terrorists?

- American politics is absolutely cynical. Terrorists, according to this policy, can be bad or good. But the problem is not even that. Yes, we have many reasons to believe that the September 11 attacks, and, by the way, the Japanese attack on Pearl Harbor in 1941, were part of a political plan that allowed us to solve American problems. The “opening” of so many states that interfered with certain forces and interests was ensured precisely by the terrorists ...

Even 10, even 5 years ago, no deals for the United States were possible. They could then have either enemies or satellites. Enemies are targets, and satellites are servants with whom no deals are made. Now they feel the need to negotiate, tack. Feel the need for deals. The situation has changed due to the crisis. After all, America is taking tremendous steps to find a way out of this crisis, it is reindustrializing, robotizing, and returning production to its territory at a tremendous pace. Gas prices in the US are lower in 3 than in Europe, and electricity in 2 is cheaper. Imagine what a competitive advantage! But still this is not enough: in order to get out of that colossal macroeconomic loop into which they themselves have driven, they need to drastically reduce their external obligations. Just "go home."

- Stop being a “world gendarme”? By the way, many countries have their own stable image: China is a “world factory”, Switzerland is a “world safe”, etc. And what image, what role should Russia strive for? What services or values ​​can we offer to humanity? In addition to excellent weapons, of course ...

- World conscience. We can offer God to humanity. Which the Western world cannot offer to himself, because he has become disgusting to him. We can and must offer the world a social model, a project of a social structure that would resolve the intractable and incompatible with life contradictions of the current model. This is a political, social, and economic structure. And it will be the new device, we can not pull this model out of the past: it is not there ...

Ctrl Enter
Noticed oshЫbku Highlight text and press. Ctrl + Enter
We are
Mikhail Leontyev: “It is beneficial for us to save America”Interview of V. Putin to Channel One and the Associated Press Agency
Military Reviewin Yandex News
Military Reviewin Google News
36 comments
Information
Dear reader, to leave comments on the publication, you must to register.