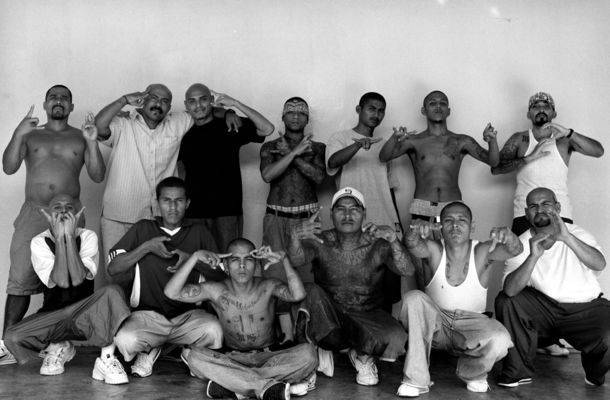 On one policeman in the US accounts for up to 500 gangsters ... American cities are swept by a wave of street crime. The volunteers of the North American office of the Stringer Bureau of International Investigations - FBII - turned out to be enough to get out of their homes to be in the thick of clashes between gangs.

All these are daily reports of the American police, passing under the strange gang-related stamp, which literally means “associated with gangs”. So politically correct American cops bashfully called gangster clashes, which in recent years have become the main scourge of major US cities. Although it is too late to be ashamed, it is time to hit all the bells - the FBI recognized street gangs, along with terrorism, as the main threat to US national security in 2005. Of course, only according to the official data of the federal forces there are more than 33 thousand gangs operating in the country, and the total number of their members exceeds 1,4 a million people! And do not be deceived, the FBI did not include all American prisoners in this list (there are even more of them in the US - 2,2 million people), it means only active members of gangster groups, mostly young men. In other words, there are as many people in American gangs as they serve in the entire US Army! 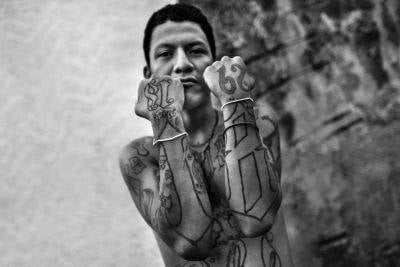 The gangs account for 48% of violent crimes committed in the country, and in some regions this figure goes up to 90%. “The worst situation is on the outskirts,” says Joshua Washington, who for the years 7 was in the AVLN gang and recently released on parole. - In a strange area of ​​municipal high rises in general it is better not to go. In the suburbs it happens in different ways - the richer community hires private guards, then the gangs do not climb there. ”

Most cities in the northeast of the country, in California and in the Great Lakes region, are the most densely populated US states and the effects of the economic crisis are most noticeable here. “The sharp rise in street crime has become one of these consequences,” says Michael Snyder, a journalist and author of The Beginning of the End. - According to the data of the same Federal Bureau of Investigations in the spring of 2009, the number of gangs was estimated at 1 by a million people, that is, it increased by 40% in the post-crisis years! Where it is impossible to earn legally, for the sake of survival, people are forced to commit a crime. ”

And the unexpected consequence of a sharp increase in criminal gangs was a significant expansion of their activities. In addition to traditional racketeering and street drug trafficking and weapons gangs occupied new criminal niches for themselves - the transport of illegal migrants, human trafficking, the protection of prostitution. But what scares even more, gangs began to master high-tech, so-called “white-collar” crimes: counterfeiting, credit fraud and theft of personal data.

The FBI retrograds out of habit divide gangs into street, prison, and motorized. At the same time, the division into street and prison is very conditional - the only difference is on which side of the prison fence the gang was originally organized (in the overwhelming majority of cases, gangs act on both its sides). And motorized gangs or OMG are the hairy bikers from “Hell's Angels”, “Pagans” and others “Bandidos” repeatedly praised by Hollywood. Before the start of 90, they did play a prominent role in the underworld, but still in 80, Latin Americans, who today unconditionally settled on the US criminal Olympics, began to actively oppose them. 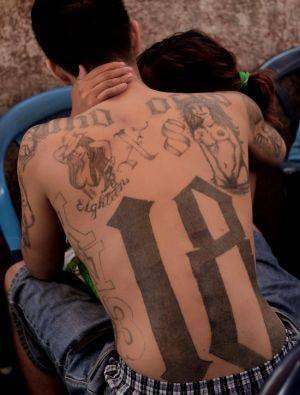 The Latin Kings gang was formed by Puerto Ricans in Chicago even earlier, in the 40s. Today 42 000 its members are operating in 160 cities and 31 staff. At the same time, the gang is considered to be the most disciplined and organized, and the basis of its ideology is “kingism”, which the group members call their religion. The decals are tattoos with a three- or five-toothed crown.

The largest and most brutal Latin American gang "Mara Salvatrucha" (Mara Salvatrucha or MS-13) was founded in 80 in the years by immigrants from Salvador who had flown to the United States. For the sake of intimidation, its members cover the whole body and even the face with tattoos, and their trademark is killing with a machete. In total, the gang consists of about 70 000 participants, not only in the United States, but also in Latin American countries.

And without that considerable numbers become even more terrible, if we consider that the majority of gang members are 18-25 men for years. And to recruit recruits gangster recruits begin even among schoolchildren. According to the report "Fighting youth violence" prepared for the US Congress, schools rank fourth among the "recruiting centers" of criminal gangs. Every fifth American schoolboy receives an offer to join the gang.

“It’s enough to offer the colored boy to deliver the package to the right address and promise 100 dollars for it,” Joshua Washington shares her experience. - The next day he comes to get the money. And when you get a hundred, it’s almost impossible to refuse another offer. You get used to free money quickly. ” 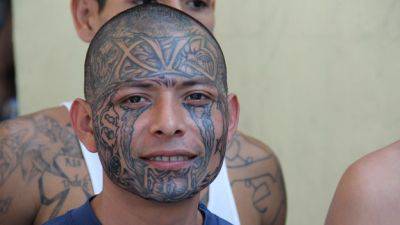 This gang and enjoy. The most common age of group members converts is 10-12 years. Moreover, there are frequent cases when gang recruiters “work” among first-graders (in the US, they go to school from 5-6 years). “Gangs are worse than terrorists,” psychologist Mary Jo Rapini is indignant. - They use childish naivety and low self-esteem. Children consider themselves small, defenseless, unable to do anything, and joining a gang gives them a sense of self-worth, care and security. ”

However, experts also see the activation of gangs in schools, above all, macroeconomic reasons. If in 2000, more than half of American teenagers had a job and, accordingly, could earn pocket money, in 2011, this figure decreased to 29,6%. In addition, educational optimization was carried out in many states - due to cuts in funding, some schools in the cities were closed, and students were transferred to neighboring institutions. Gangs could only take advantage of the natural opposition of the new and old-timers.

How did the FBI respond? Prepared for teachers a brochure allowing to recognize the symbols of gangs in the drawings with which students decorate their notebooks and backpacks.

No money - no police

There is nothing to say about the police - she simply lacks the funds for an adequate response to the rampant crime. “If the number of gangs in Chicago has increased from 500 to 600 over the past two years, then police funding has decreased by $ 67 million, which led to a reduction in personnel by 1300 people,” Michael Snyder pours numbers. “And despite the fact that in the 3-million city, gangs consist, according to various sources, from 70 000 to 100 000 people, and in the unit for fighting criminal gangs there are only 200 policemen. That is, one cop has up to 500 thugs. It is not surprising that Chicago is among the world leaders in the number of murders, and even Mexico City and São Paulo overtake this indicator. ” 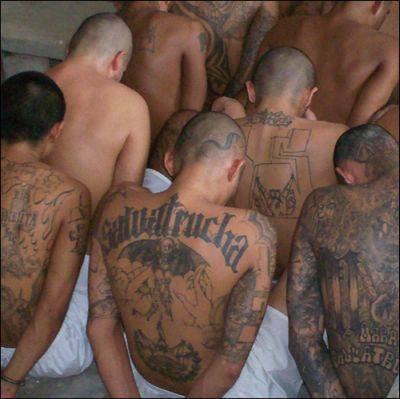 Although in neighboring Detroit the situation is even worse. The bankrupt "capital of the automotive industry" is so short of money that in January of this year the mayor decided to liquidate the anti-organized crime unit altogether. If 10 years ago there were 5000 policemen in the city, now only half are left. Due to budget cuts, most sites are closed 16 hours per day, less than 10% of crimes are investigated. The result is appropriate - last year the number of murders in the city increased by 13%, and the unemployment rate exceeded 18%. Is it any wonder that Detroit ranks second in the country in terms of the number of violent crimes and consistently holds the first place on the Forbes list of the most hapless cities in the USA?

The situation in California’s wealthiest state is no better. The local leader in the number of violent crimes - Auckland - because of the budget cuts, dismissed a quarter of the policemen, which led to an increase in theft by 43% last year. Neighboring cities are selling police equipment and helicopters, and in Los Angeles there is not enough money for the maintenance of prisoners. As a result, prisoners will be released from prisons who have served an 40% off term. And under the program fall, including rapists and murderers.

A holy place is never empty, the streets freed from the police take control of criminal groups. Moreover, they often do their job better than the state. “For residents of ethnic areas, gang control is even preferable,” says Mary Jo Rapini. - Gang members speak the same language with them, act according to the usual "laws", give a sense of security, and, if necessary, provide work. The problem is that adolescents who grew up in such an environment see only one path for social growth - joining a gang. ”

However, in a gang, as in any hierarchical system, in order to move up the “official ladder”, “achievements” are needed. And they are most often committed on the territory controlled by the rival grouping. Hence the incessant exchange of fire, thousands of wounded and hundreds of dead. “Most of all this is reminiscent of the clan war,” argues the past Iraq and Afghanistan Sergeant of the Chicago organized crime unit Matt Little. - The boys run through the streets and indiscriminately firing in all directions. Those who are behind 30 are no longer visible on the streets - they are either in charge or in prison. The level of cruelty here is such that only a few survive to this age. ” 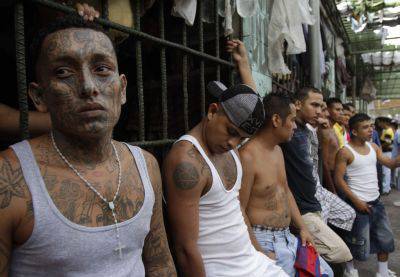 Nevertheless, the level of professionalism in gangs is growing. In the past two years alone, the FBI has registered with 53 a case of gangs sending their members to the active army. There they learn the tactics of combat, modern types of weapons and equipment. What will start on the streets when professionally trained killers rush in there is terrible to imagine.

Although it seems that Washington has already thought about this development. Even in the National Security Strategy adopted in 2006 in the event of large-scale disasters, a partial transfer of the functions of local authorities to the military was allowed. Two years later, it became clear that the US authorities are preparing not only for natural disasters - in the Strategy for the modernization of the armed forces, organizations with a radical anti-government ideology added to the list of threats to national security. In 2010, the Pentagon conducted exercises, which worked out the actions of the armed forces to suppress civil unrest in the event of an economic collapse. And since 13 in May 2013, after amending the Federal Regulation 32, the US military has been given official authority “under extraordinary circumstances, to temporarily assume the responsibility of suppressing large-scale unrest.” True, if the government exposes a million armed bandits army units and heavy equipment against 1,4, it will no longer be a riot suppression, but a real civil war.

Ctrl Enter
Noticed oshЫbku Highlight text and press. Ctrl + Enter
We are
US generals have forgotten the word "honor" (fbii.org USA)What you didn't want to know about England
77 comments
Information
Dear reader, to leave comments on the publication, you must to register.