Against Syria means against Russia

October 18 2013
93
Qatar, as a competitor of Russian Gazprom, eager to warm the whole of Europe, has clear objectives in Syria. The removal of Assad from power and the subsequent dismemberment-cutting of the country into religious, national, and other “buffer” pieces would have allowed Qatar to lay its gas pipeline through the former independent territory. In the EU, many people have long dreamed of at least “diversifying” gas supplies, and at the most - of a general refusal of Gazprom’s services. And it is by no means possible to say that in the United States, under such an energy scenario, which severely infringes Russia, officials will become sad. Qatar, Saudi Arabia and other monarchies of the Persian Gulf are great non-democratic friends of the White House, who forgive them even intolerance for LGBT people. 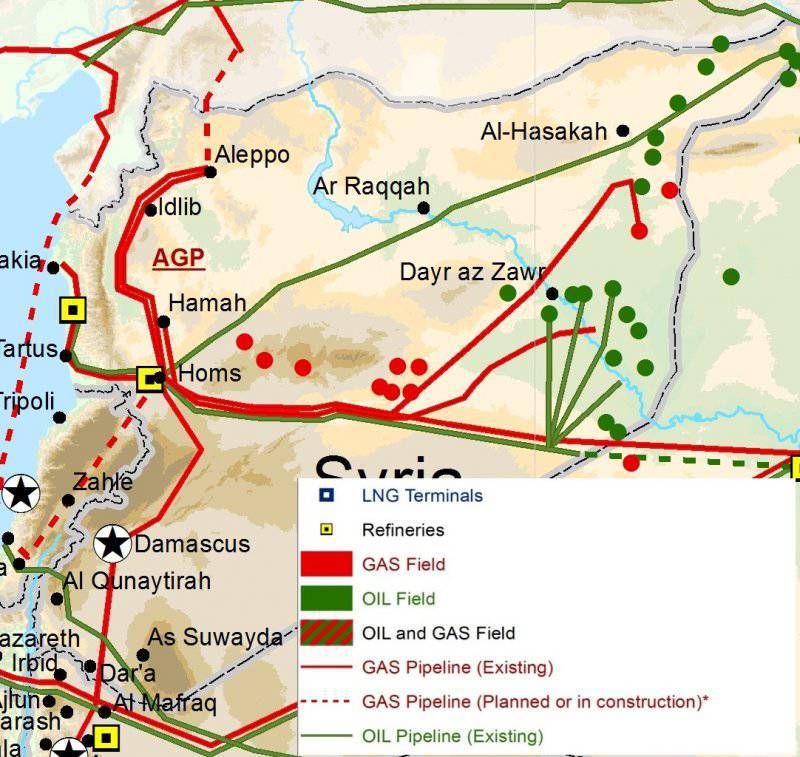 Syrian история not really over. Russia's success on the geopolitical front, the activities of the OPCW in Syria, and even the awarding of the organization to the Nobel Prize are far from a happy end. If Washington temporarily withdrew from Damascus, licking crisis wounds, this does not mean that Riyadh and Doha have canceled their “international” plans to redraw the Syrian borders. As for the European West, Bashar Asad is still listed as a tyrant there. And in the United States, they still repeat the mantra: "Assad must leave." The “opposition” in Syria of the world with Assad does not want - because its wing in the form of the “Syrian National Council”, sponsored, of course, by the same Qatar, is unlikely to fly to the peace conference “Geneva-2”.

“They want to destroy Syria in order to:

1) to take control of not only the newly discovered Syrian gas fields between Damascus and Homs, but also the entire territory of this country, considered as the most important Middle Eastern geo-economic intersection, alternative to the sea route for the transportation of hydrocarbons. Gulf oil and gas monarchies are critically dependent on the transport route through the Strait of Hormuz. It is enough to block this path for several months - and the crisis of the economies of the Saudis, Qatari and Europeans is inevitable;

2) replace gas supplies to Europe from the north (from Russia) with supplies from the south (from US vassals in the Gulf), because after the fall of Assad, even if Iran blocks the Strait of Hormuz, a gas pipeline to Europe can be built, allowing Qatar to replace Gazprom.

The scientist notes that the Qataris have already "quietly" pulled back 6% of the EU market, and the share of Gazprom there has decreased by 2%. Now they are crushing the gas sphere of Libya by themselves and are targeting Algeria’s reserves through deliveries weapons and export of jihad.

According to the expert, the decisive factor in the fate of Syria will be 2014 year. And it's not just about Syria, but about the Middle East frontier of Russia. Why is 2014?

This year, the analyst writes, chemical weapons will be destroyed in Syria. In addition, on the border of Qatar and Iran, the moratorium on the development of the Severnoye gas field will expire. Further, Qatar will complete the fleet and create the infrastructure for the supply of LNG to the EU. By that time, Qatar will also be part of the ownership of European gas transmission systems. And in the United States it will be impossible to postpone further the solution of internal problems.

Hence, the main task of Russia's foreign policy in the Middle East in 2014 will be, in the opinion of the author, the prevention of the “democratization” of Syria - that is, its destruction.

As for the joint actions of the West against Syria over the past two years, the historian Mikhail Narinsky considers this policy to be similar to the Munich Agreement.

The other day, Igor Panarin ("Voice of Russia") interviewed the head of the department of international relations and foreign policy of Russia MGIMO of the Ministry of Foreign Affairs of the Russian Federation, doctor of historical sciences, professor Mikhail Narinsky. The professor, in particular, said:

“I think that the definition of the“ Munich Agreement ”fully justifiably and adequately assesses what happened in Munich at the end of September 1938 of the year. This conference and these agreements are called the “Munich Agreement” because the fate of Czechoslovakia was decided in Munich, but without its representatives. ”

Narinsky recalled the composition of the characters of the collusion: the leaders of Great Britain (the British government was headed by Chamberlain), French Prime Minister Daladier, Hitler and Mussolini.

“There were negotiations, various solutions to this problem, but in the end, in Munich, they decided that Czechoslovakia should cede and hand over the entire Sudetenland region of Germany, and in a very short time - within 10 days. She should have transferred this region intact under German power. ”

The result of the agreement: Czechoslovakia dismembered. Another result: Germany has increased due to the industry of the dismembered country. The third result: Adolf Hitler gained international weight.

The parallel with Syria is understandable. No one in the West, in its full composition, including the United States, asks, what kind of life does the Syrian people want. Similarly, in 1938, no one was interested in the opinions of those who lived in the Sudetenland and in general of the residents of Czechoslovakia. The main thing was the fear of Europeans before the spread of "Bolshevism". Few people imagined how soon the fear of Hitler would turn out. Similarly, today, few people think that the jihadist forces trained in the Syrian war will continue jihad on European and American territory. These “warriors of Allah” have one thing - to fight, they are not able to do anything else. Taking power in Syria (or rather, on a fragment of its territory), bearded Islamists will not stop at this.

The anti-Syrian collusion differs from Munich by the additional oriental composition of the actors. And, it seems, today this composition has moved from supporting roles to the execution of the main ones. Now it’s not Paris and London that play the first fiddle in the geopolitical campaign, but Doha and Riyadh. Moreover, Israel, which in recent weeks is whispering with the Saudis, recently admitted that al-Qaeda is better than Assad. Israeli Ambassador to the United States, Michael Oren, gave an interview to The Jerusalem Post, where, among other things, he said that a victory for the rebels, including al-Qaeda militants (the bad guys "without ties with Iran") would be less evil than preservation of the Syrian-Iranian alliance. Hence, analysts draw conclusions about the new alliance of the monarchies of the Gulf with Israel - created not only for the sake of opposing Iran, but also for the sake of infringement of Syria, allied to Iran. Such is the multi-layered and multi-path geopolitical composition.

The first option - the establishment of no-fly zones over several areas of Syria.

Another way to achieve the desired goals are point air strikes, the continuation of which will be a full-scale land operation of the United States and its allies.

The third scenario is the invasion of Turkish troops, leading further to participation in a NATO operation. Such an invasion may be caused by a threat from the Kurds or by Turkey’s response in the event of a Syrian army firing into militant groups crossing the border. The option of provocation is not excluded.

Another version of events - the invasion of Israeli troops. It can be caused either by territorial claims, the author notes, or by provocations on the territory of the Golan Heights.

The author sounds the alarm:

“Russia should make its conclusions. The Russian military must be prepared to transmit to Syria data about the start of air raids and using the available satellite constellation, to help the Syrian army monitor the movements of the ground forces of the aggressors. Timely warning of the attack will allow time to mobilize. But all this is extreme measures. While the invasion is postponed indefinitely, it is imperative to arm Syria. MiG-31E, MiG-29М2, Buk-M2E, Yak-130, C-300PMU-2, Mi-25 and much more will help to avoid a big war. ”

In addition, Russia, and with it China, could supply the Syrian army with night-vision equipment, communications equipment, mini-UAVs, as well as modernize ground-based equipment. All this, indicates A. Serdyuk, will help destroy the internal enemy.

Vladimir Alekseev ("Iran.ru") notes that today emerges a kind of alliance: the US triangle - Saudi Arabia - Al-Qaida. These forces, in addition to local rebels, are the main opponents of the Syrian government. But at the same time, each player has his own goals.

The United States seeks to destroy the last independent regime in the Arab world, to protect Israel from chemical weapons and move toward Iran. The Saudis are carrying out plans for Wahhabi regional domination. Acting in a similar vein, the Saudi kingdom is ready to ensure the geopolitical interests of the United States and keep in mind the security of Israel only until all this affects its own interests. The goals of al-Qaida are to build an Islamic state on the basis of Sharia in Syria. Moreover, the analyst recalls, Ayman al-Zawahiri said that the opponents of the Assad regime should fight with the countries of the West.

In the end, we add from ourselves, these three parties would rather divide Syria into several pieces, rather than come to an agreement. The agreement between them can only be what is possible between a fox and a wolf.

As for the construction of "democracy" in Syria, then in the West they no longer talk and write about it. Up to sixty percent of those fighting in Syria against Assad are notorious thugs. This is now openly written in the European and American press. With such an opposition, it is somehow strange to talk about representative government, especially since the current president of Syria is still not an impostor, but an elect of the people. And who will be represented by bearded “oppositionists”, among whom there are cannibals, is no longer a question.

And in this context, Russia should be wary of the spread of not only Qatari gas in the world, but also a bearded infection.

Observed and commented on Oleg Chuvakin
- especially for topwar.ru
Ctrl Enter
Noticed oshЫbku Highlight text and press. Ctrl + Enter
We are
"Non-Arab Emirates": migrants in the Gulf countriesResults of the week. "God forbid to see Russian revolt, senseless and merciless!"
93 comments
Information
Dear reader, to leave comments on the publication, you must to register.