VM-T Atlant is one of a kind

October 17 2013
15
The only worldwide model of the unique transport aircraft VM-T Atlant was presented at the last MAKS-2013 air show. This aircraft is known today by many nicknames, the most interesting of which are “lean” and “flying barrel”. Such nicknames transport aircraft received for its fuselage, inherited from a bomber, on top of which was attached a rounded cargo container. The aircraft was developed in the OKB. Myasishchev in the early 1980-ies. It was planned to use it for transportation to the Baikonur cosmodrome of fuel and aggregates of rocket and space complexes. For all the time it was built only 3 instance, one of which was originally created not for flight, but for static tests.


Today, only one sample of this machine remains in service, it is located at the Flight Research Institute named after Gromov, this particular aircraft was demonstrated at the last air show. It was this plane that at one time delivered to the Baikonur cosmodrome from Bukovy Zhukovsky. "Currently, the aircraft, which was in very poor condition, cleaned, tinted," - said the representative of the aviation sports club, who took patronage over a unique machine. According to him, a compact cabin remained inside the aircraft. But visitors are not allowed there yet. “Firstly, the inside is very crowded, and secondly, the squib guns are still mounted there, which is not safe for people.”

However, over time, everyone can get into the aircraft. At the same time, the priority is to restore the aircraft to the state of the museum exhibit and eliminate all damage found in its planes. At present, the VM-T Atlant is presented at a static exposition and now it is of great interest to both ordinary people and specialists. 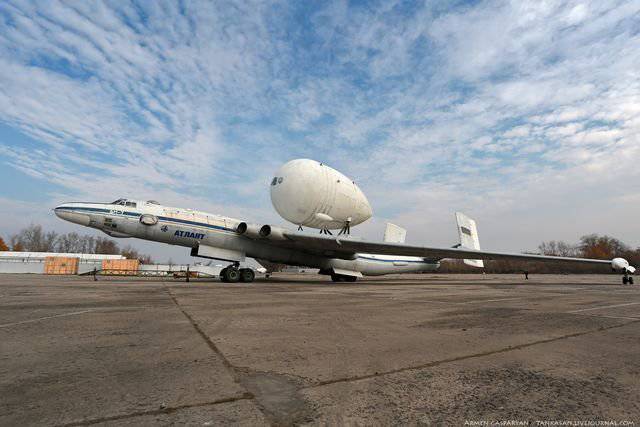 VM-T aircraft operated from 1982 to 1989 years, this transport aircraft developed by Myasishchev OKB is a modification of the strategic bomber 3M. In total, 3 of such aircraft were assembled in the USSR: one was handed over for testing at TsAGI, the second was stored in Dyagilevo, and the third was stored on the territory of LII. His first flight car made in 1980 year.

In the development of the large-scale Soviet space program “Energy-Buran”, hundreds of enterprises of the country took part, which were scattered over a vast territory. All this created serious problems with the definition of the final place of assembly and delivery of parts and assemblies of the complex to the launch site - at Baikonur. At first, it was planned to concentrate all the main technological processes of assembly right near the cosmodrome, but this solution was quickly recognized as inexpedient, since it required the creation of a highly developed industrial infrastructure and the involvement of a huge number of skilled workers at Baikonur. As a result, it was decided to conduct on-site assembly only and the entire prelaunch processing, while the bulk of the work was planned to be carried out at the head enterprises.

So the assembly of the airframe of the "Soviet shuttle" was entrusted to the Tashkent machine-building plant. In order to deliver them to Baikonur, we studied the possibilities of air and land transportation, which demonstrated that ground delivery would be associated with an unacceptable level of financial costs. Therefore, preference was given to delivery by air. In this case, 2 was considered the main options: the use of aircraft and helicopters. 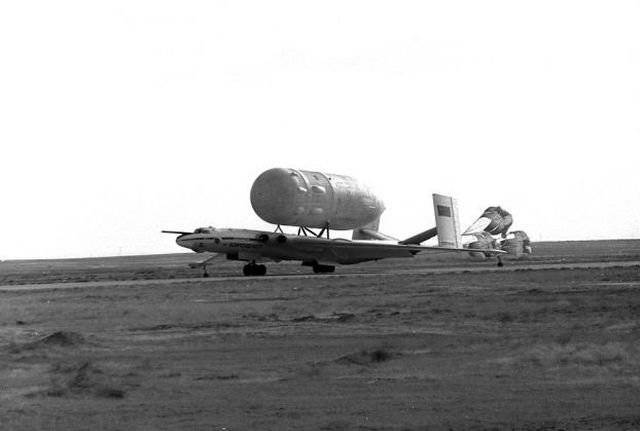 For delivery using helicopters, they intended to use the Mi-26, which had a payload capacity of 26 tons. According to this project, it was planned to attach 2 or 3 helicopters with cables at once to large-sized cargo with large mass (missile compartments, airframe). Such an air "bundle" was supposed to deliver the cargo to its destination, selecting in advance the optimal value of the speed and altitude of the flight. At the same time, there was no such flight experience in the country.

Carried out with a mock-up cargo, having the configuration of the tank compartment of the rocket, experimental flights clearly demonstrated the danger and complexity of this type of transportation. During one of the experimental flights during a sudden weak turbulence, a “pendulum” swinging of the load on the ropes was noted, which caused a violation of the stability of the helicopters, due to which the crews of the vehicles were forced to dump the load. Further estimates have shown that this situation can be repeated in the future, which, if more intense atmospheric disturbances can cause a catastrophe. Refusal from this option of transportation contributed to its unprofitability: a small range of helicopters with a load on the external sling led to the need to build numerous landing sites with refueling stations along the entire route.

At the same time, the An-124 Ruslan heavy transport aircraft was planned to be used for the delivery of large-sized fragments of the Energiya-Buran space system. But at the time, this car was still under construction. It was possible to rely on its use only in the long term. Therefore, it was decided to listen to the initiative of the general designer V.M. Myasishchev, who proposed the option of converting into a cargo plane from the out-of-date strategic bomber 3M. This machine had a high stock of aerodynamic qualities necessary for flying over a long range, which could be sacrificed in the process of conversion into a transport aircraft. 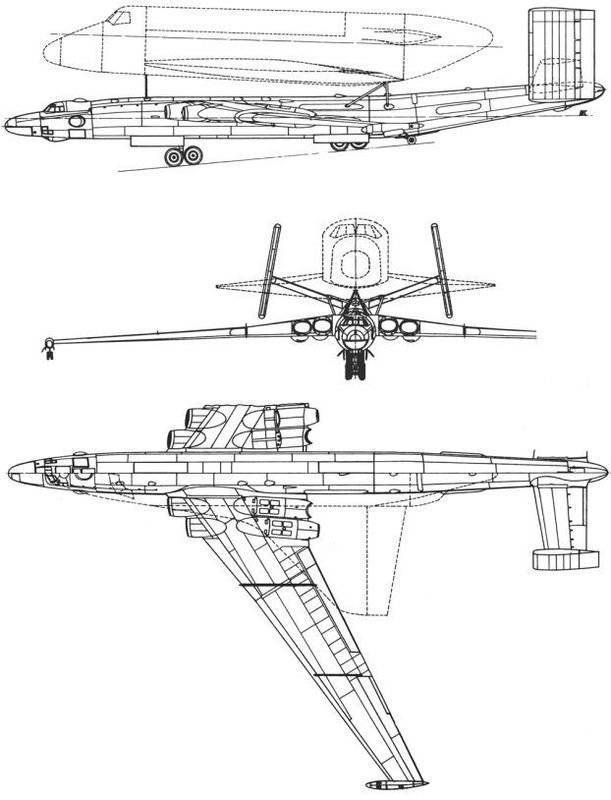 2 options for possible aircraft modification were considered. The first option provided for the placement of cargo inside the enlarged cargo compartment of the fuselage (according to the type of Galaxy aircraft). But this option required the development of a new fuselage of a larger diameter (10 meters instead of 3 meters from the 3M aircraft). At the same time, the Burana glider was to be transported with undocked wings (its wingspan was approximately 24 meters). Also, with this option, it was planned to replace the bicycle chassis of the 3M aircraft with a conventional one - a three-wheeled one. As a result, the weight of the aircraft grew, which led to a decrease in the carrying capacity of the machine. But, most importantly, the release date of such a transport was becoming unacceptable.

The second version of Myasishchev suggested a much smaller amount of alterations, the placement of cargo was planned outside the airframe design - on the "back" of the fuselage. Such a solution made it possible to transport goods with a minimum change in their configuration. At the same time, the idea of ​​placing transported goods outside the aerodynamic contours of the aircraft was not new at that time. Such a solution today is widely used in transport and combat aviation many states. The novelty of Myasishchev’s decision was in rather unusual proportions between the dimensions of the carrier aircraft and cargo (the diameter of the tank compartment of the rocket was 8 meters, while the diameter of the fuselage of the aircraft was only 3 meters).

The placement of cargo on the back of the 3M bomber became possible after lengthening its fuselage 4,7 meter, which was achieved by replacing the tail section, which was slightly raised due to the "oblique" insert to avoid collisions with the ground during takeoff and landing with large angles of attack. Studies of controllability and stability demonstrated the need to change the shape and dimension of all the surfaces of the aircraft empennage. Due to the decrease in the speed of flight of the aircraft, the stabilizer of the swept horizontal tail was replaced by a straight line with a larger area. Instead of a single-fin vertical tail unit on the VM-T Atlant, a significantly increased (up to 26% wing area) double-fin tail was made, made in the form of 2-x washers, which were obliquely attached to the ends of the stabilizer, which in turn contributed to reducing the loads on fuselage machine. In this case, the wing of the aircraft and the rest of the fuselage, including the cockpit, did not undergo any special changes in shape and size, as well as the main and nose struts of the bicycle chassis. On the plane, the old 3M strategic bomber could easily be identified. 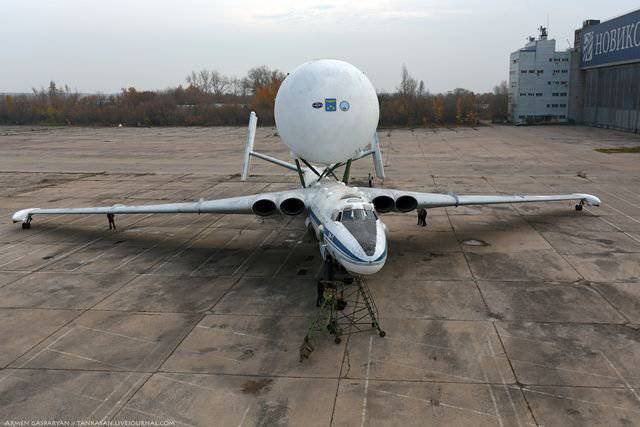 The correctness of the chosen concept was subsequently confirmed once again when designing the heaviest An-225 Mriya transport aircraft in the world, which could carry loads of up to 200 tons by air. The operating experience of the aircraft VM-T Atlant, and then the An-225 Mriya, confirmed the correctness of the concept of developing and operating complex layouts of aircraft, including various large-sized component parts, with significantly different mass, aerodynamic, and stiffness characteristics.

In both flying Atlants, in the 80s of the last century, more than 150 flights were flown to deliver all large elements of the Soviet Buran and Energiya launch vehicles to the Baikonur cosmodrome, but after the curtailment of this program and the appearance of Ruslan and An-224 "Mriya" aircraft was not needed. At EMZ them. Myasishchev tried to find a use for this unique aircraft. In the 1990s, various projects were considered, one of which was the use of the D-57 cryogenic propellant aircraft in the air, in which India was interested. Negotiations were also conducted on the development of very large transport systems on the basis of VM-T Atlant, designed to transport a variety of oversized cargo by air. The option of creating a launch pad on its base for launching promising video conferencing systems was also considered, but all these projects remained on paper.