Features of the national artisanal weapons. Made in Ukraine

October 17 2013
32
At the request of Esquire, an expert of the criminalistic center of the Ministry of Internal Affairs, Colonel Igor Ignatiev, appreciated the skill of underground gunsmiths on home-made cuts, pistols and revolvers seized from criminals. 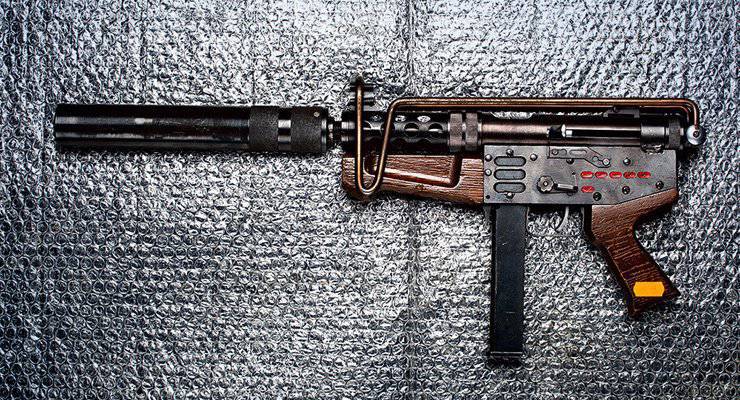 Submachine gun, made by craftsmen in the early nineties at the Kiev plant "Arsenal". Excellent quality: butt, safety lock, translator of fire from automatic to single, built-in silencer. There is even a retarder pacemaker. 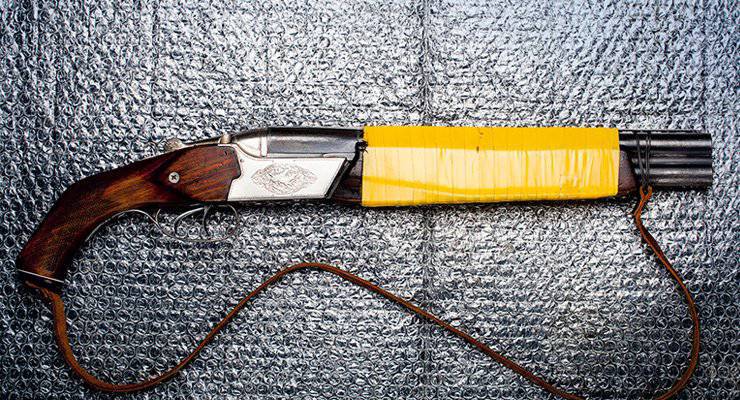 A sawn-off shotgun from which serial killer Anatoly Onoprienko shot almost all of his victims. Converted from a hunting rifle of the eighties, stolen from a rural relative. Classic weapon for melee, in the distant from him little sense: because of the shortened barrel, the fraction flies to the sides. 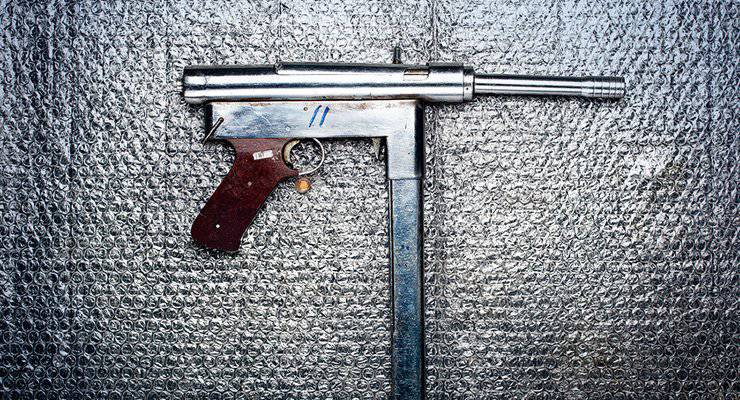 Poorly thought-out design, which was supposed to be a submachine gun. Literally crumbles into pieces when you take it in hand. The designer was clearly limited in the materials at hand and poorly mastered the technology. The store is too big: he needs a very strong spring, otherwise the last cartridge is sure to jam. 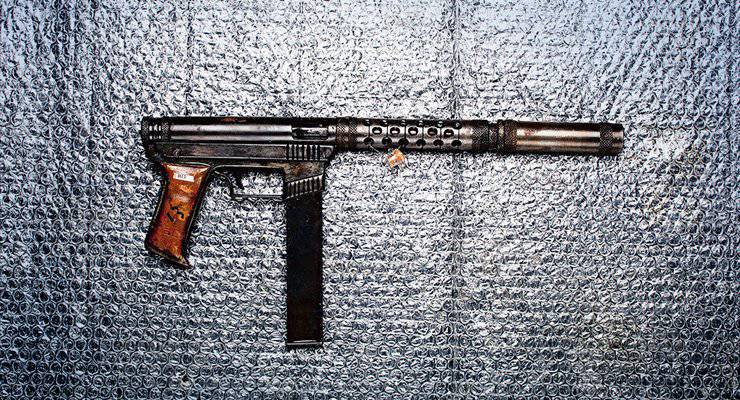 Not a bad idea, but weak execution. The silencer will not work exactly. The shop keeps on doubtful screws and rivets. However, it is felt that the author thought a lot, showed sharpness and was on the right track. Correct - in terms of design, and not in how he was going to use the result. 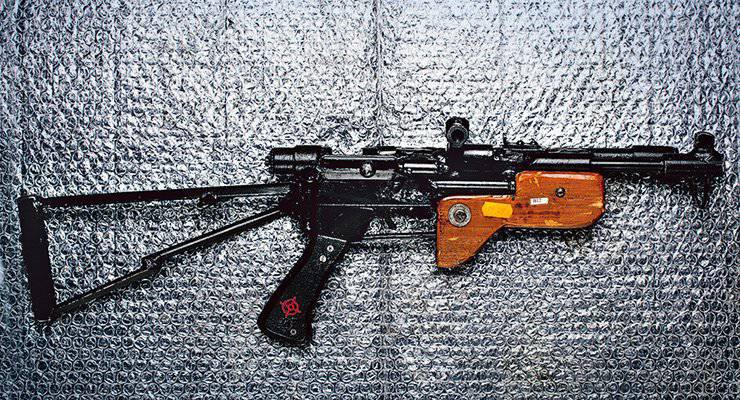 Submachine gun. The author decided to bring a lot of his ideas into the weapons business. For the ejection of spent cartridges a separate element was created here, similar to the one in the Maxim machine gun. But, unfortunately (or fortunately), this device does not work. It has a lot of welding, roughly processed parts. We tried to launch it, but we could not - it’s not even completely clear how exactly it should fire. 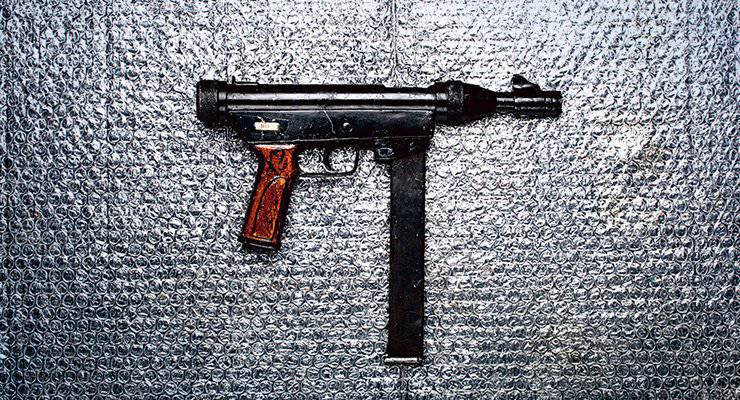 Chechen "Borz" - a simple but effective weapon. Made, as far as I know, at the cannery. Judging by the serial numbers, they made several thousand. The barrel is of poor quality, a bullet is often stuck in it, so you can unscrew it and insert another one. In Ukraine, such submachine guns were most of all seized in the Odessa, Donetsk and Chernivtsi regions, where Chechen criminal groups were operating. 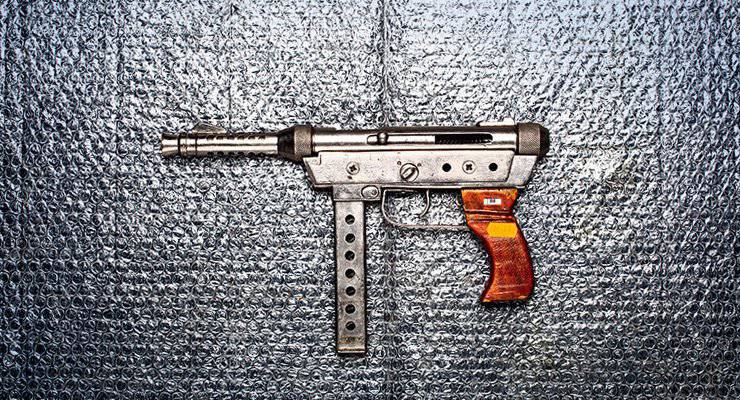 The early model "Borz", made on an unknown civilian plant. A sample of the times of the first war in Chechnya. In the second, professional weapons of a completely different level were already used there. 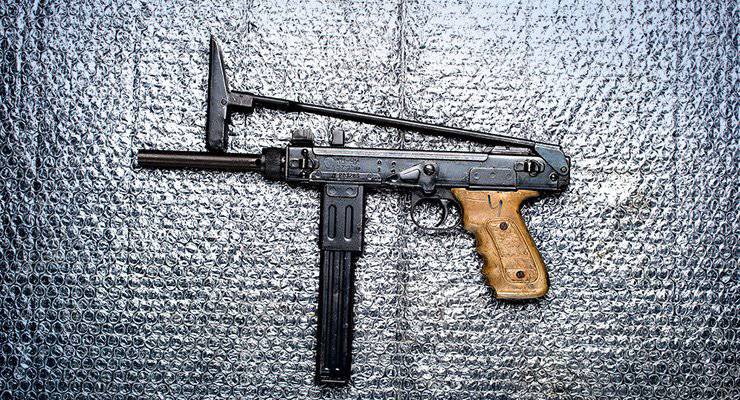 Armenian submachine gun K6-92 since the beginning of the nineties and the civil war in Nagorno-Karabakh. The Borzha prototype, a convenient guerrilla weapon that is not effective in an offensive or defensive battle, but when you need to go unnoticed, “uncover”, shoot back and leave. In Ukraine, such 800 units were seized. 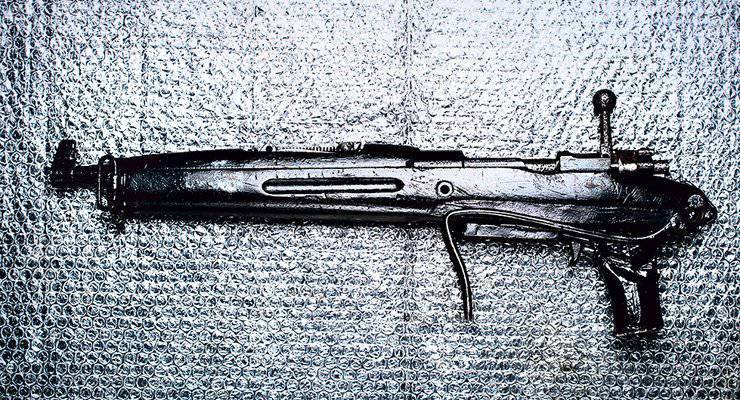 Mosin's creatively rethought rifle, or simply bleed. Homemade wire butt, bed, front sight on the end of the trunk. Classic criminal weapons for hidden carrying - and then shortened the barrel. 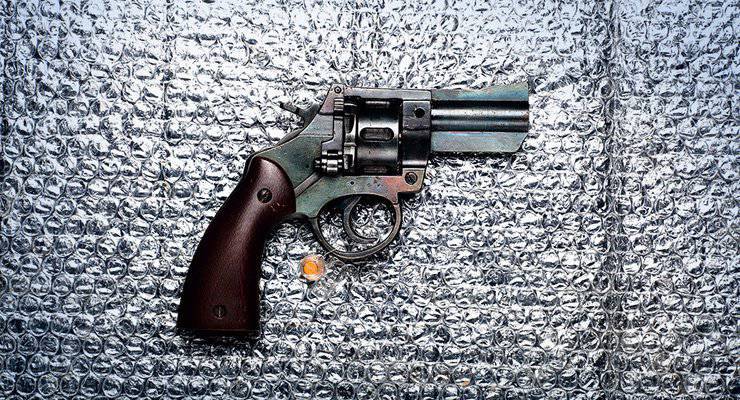 A revolver seized from criminals from Nikolaev, engaged in robbery, robbery and murder in the late nineties. Very well made. The trigger mechanism works easily, in the trunk of high-quality rifling. 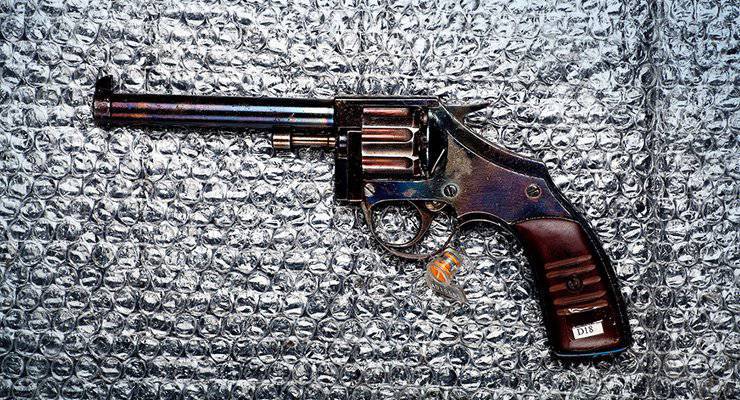 Revolver with a long barrel and comfortable line of sight. Performed at a high level. From it you can shoot for a decent distance, although it is more effective to use in melee. This is a compact caliber .22 (5,6 mm), so the drum is not designed for the classic six, but for ten rounds. 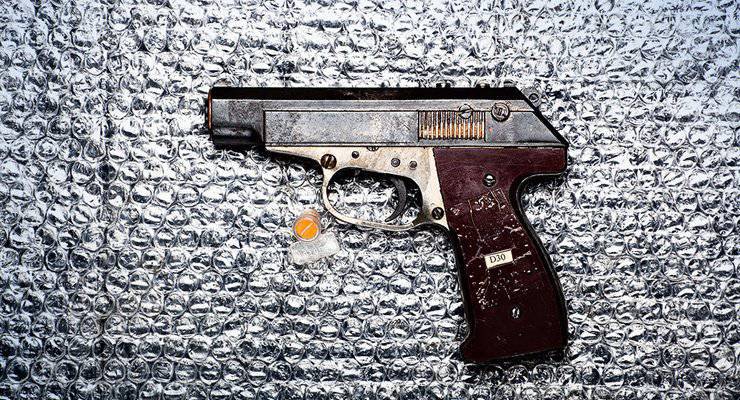 A coarse imitation of a Makarov pistol (PM). There is no fuse, the case is held on cogs. But visually, the copy looks very good: in the dark or from afar it is quite possible to take it as a PM. 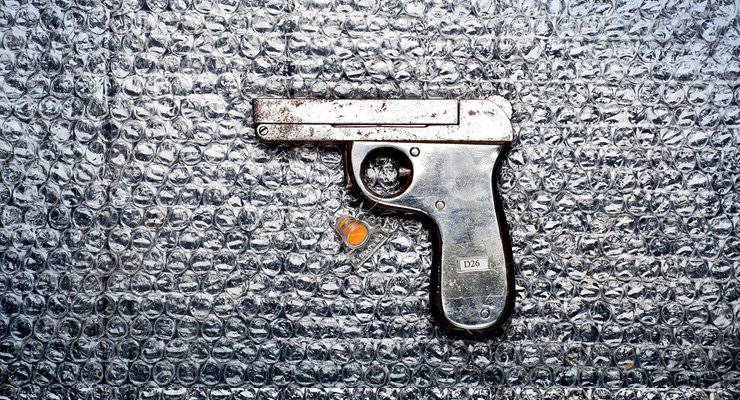 Externally - an imitation of the Austrian pistol Glock, in fact - a single-shot weapon, designed for the cartridge .22 caliber. The author tried, but the result looks quite funny. Although, if you shoot him, it will be no laughing matter, but the work is still clumsy. 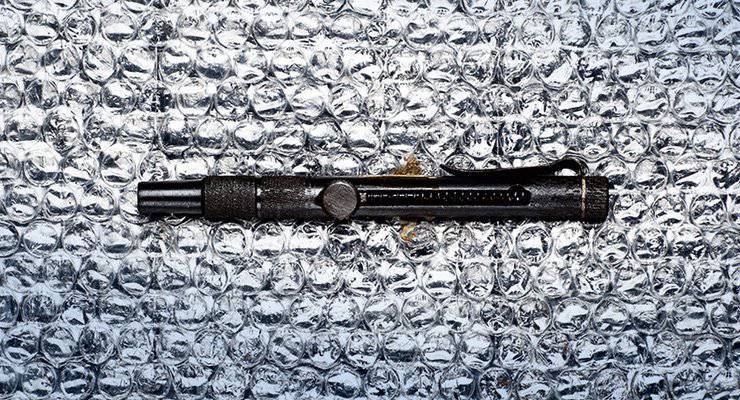 Handle-gun (gun simplified design). It works like this: you charge the cartridge, manually release the shutter lever, release it - there is a shot. The sleeve must also be removed independently. A very dangerous thing for the shooter: if the finger is not removed from the bolt in time, you can lose it. 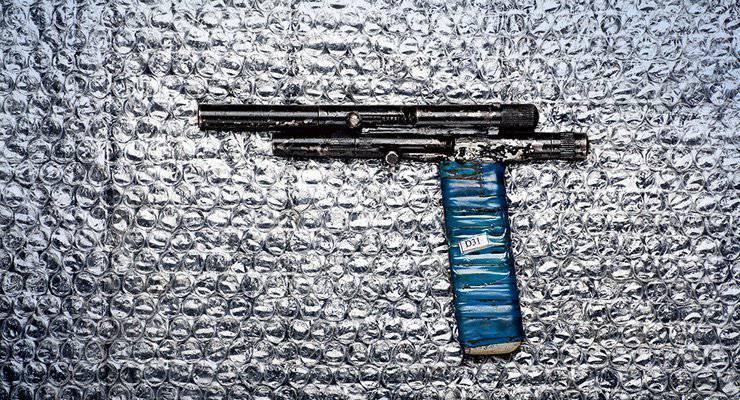 The handle gun with the handle for convenience. The barrel is rifled, but there is no point in this: the rifling is done to stabilize the bullet in flight, and even theoretically it is far from shot from this design. 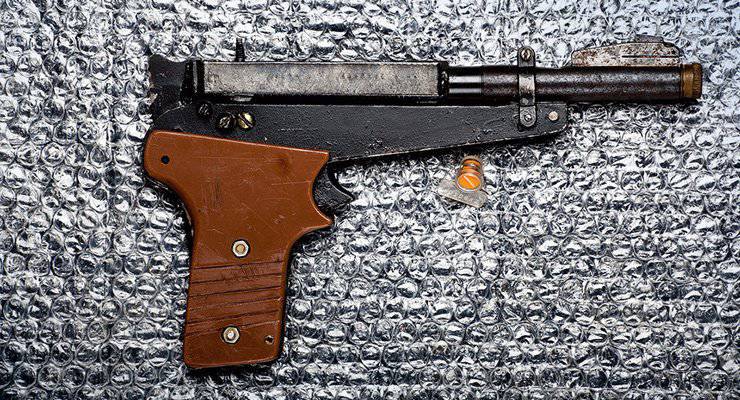 It looks worse than it actually is. The dimensions are impressive, and the cartridge is only one and is charged manually. Perhaps the author originally planned to make a gun .38 caliber, but then put the barrel under the .22 cartridges that were at hand. Painted his soul invested. 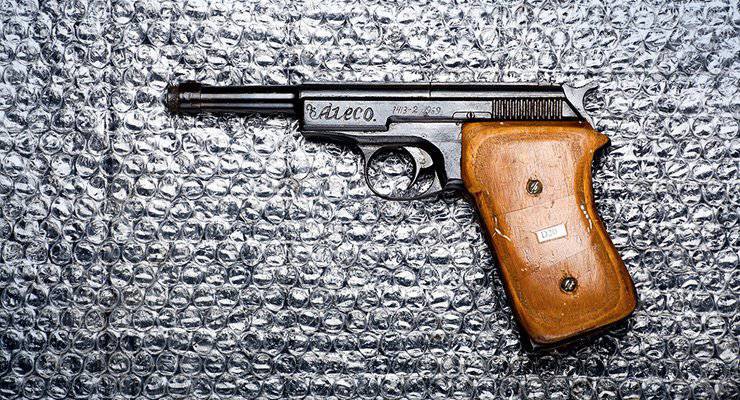 It looks rich, a lot of markings: some numbers, the stamp in the form of a crown, the inscriptions "Aleco" and "1969 year." Made with a claim to factory performance, and done well. Visually imitates the "Walther" model P38. 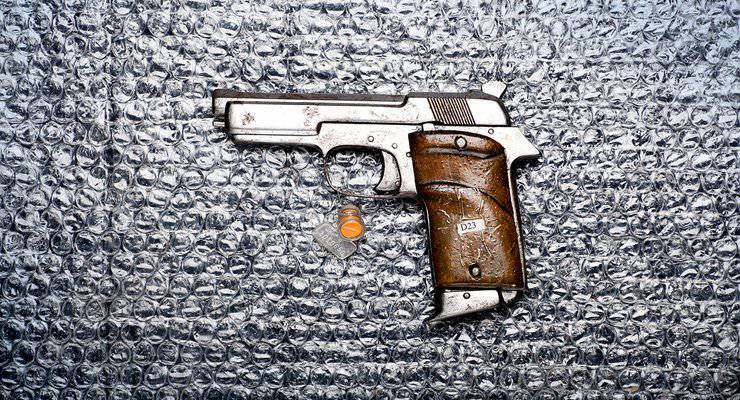 Self-loading pistol "under the browning." Very competent execution. It was obviously a long time to work on this specimen - there is even a grenade spring here, which is rare for homemade samples. Fundamentally no different from real weapons. 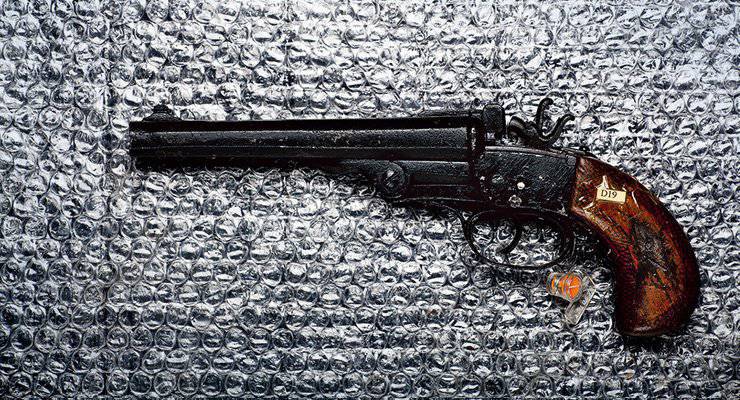 Old fashioned model. The charges are made by hand from gunpowder, wad and bullet: the author did not have modern cartridges, only components, so he began to create. To reload such a weapon, you need a few minutes, so it is suitable not for fighting, but rather for the hooligan gop-stop.

Ctrl Enter
Noticed oshЫbku Highlight text and press. Ctrl + Enter
We are
Guns 12 caliber with the possibility of automatic fireDomestic anti-tank guns
32 comments
Information
Dear reader, to leave comments on the publication, you must to register.