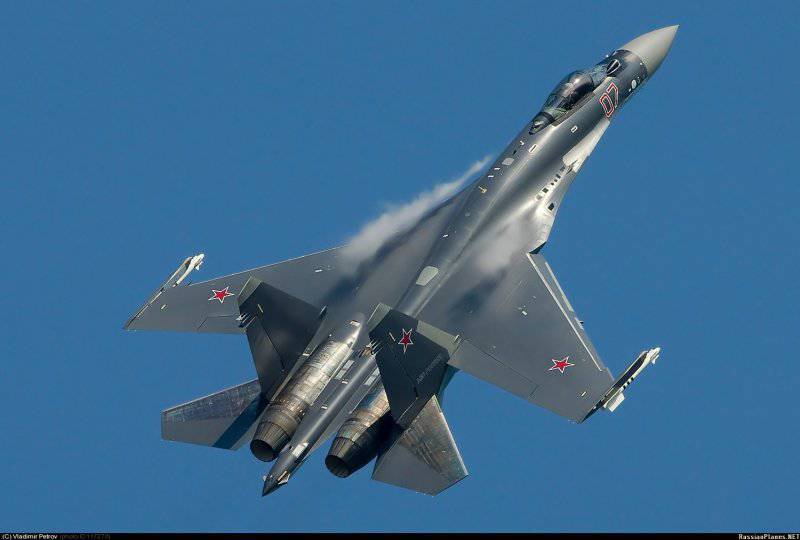 The fifth-generation fighter T-50, created under the PAK FA program, will go into service with the air force no earlier than 2015-16. For some time after being put into service, the number of these aircraft in the Air Force will be insignificant and they will not be able to have a major impact on the general condition and capabilities of the armed forces. In this regard, it was decided to purchase additional types of fighters of another type, designed to become a temporary measure in anticipation of a sufficient number of T-50. The Su-35С fighter was chosen as the most modern and sophisticated aircraft designed to ensure the combat capability of the Air Force over the coming years. 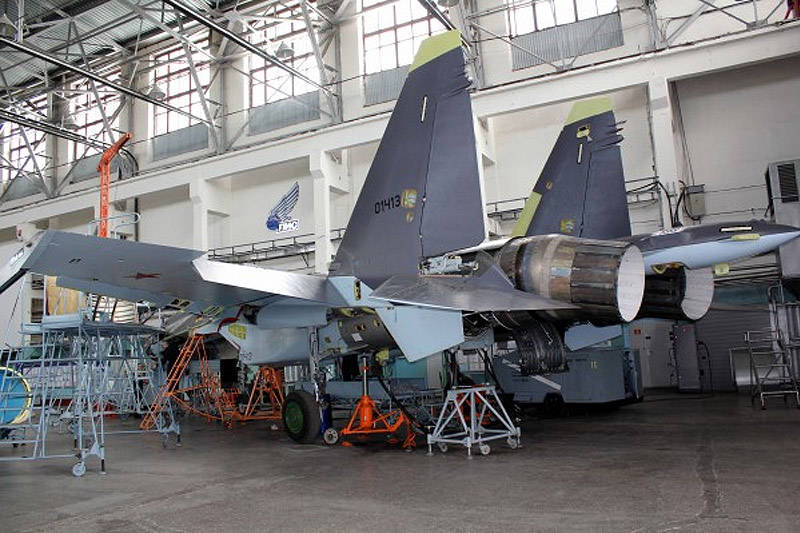 Until 2015, Komsomolsk-on-Amur aviation the plant should build and transfer to the troops 48 Su-35S aircraft. To date, according to various sources, 10-12 cars have been built. In addition, the plans for the current 2013 include the construction of 12 new aircraft. The same plan is defined for 2014, and in 2015 aircraft manufacturers from Komsomolsk-on-Amur should build 15 fighters. Officials mentioned several times that after completion of work under the current contract, a new order for 48 Su-35S fighters is possible. For obvious reasons, it is not yet completely clear whether a second contract will be signed.

The beginning of the construction of the Su-35C fighters was preceded by a long-lasting epic with the development of a new aircraft of the Su-27 family. The development of a fighter with the Su-27M index, which later received a new designation Su-35, began in the mid-eighties of the last century. The main difference of the updated Su-27 from the base machine was the use of several new technical and technological solutions, as well as the widespread use of modern at that time electronic equipment, including digital. In 1988, the prototype of the T-10М-1, converted from the serial Su-27, for the first time rose into the sky. Before 1994, Sukhoi and Komsomolsk-on-Amur Aviation Production Association built 12 prototypes of the Su-27М / Su-35 aircraft and regularly showed these machines at air shows, waiting to receive export contracts. In 1995, the serial production of Su-35 fighters started, which resulted in only three aircraft. Due to the absence of any orders in 1997, the Su-27М / Su-35 project was closed. Some developments on this project were used to create new aircraft of the Su-27 family. 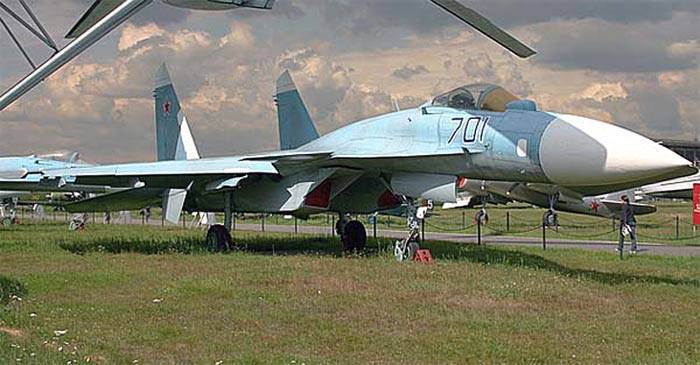 Modern история Su-35 aircraft began in 2005 year, when it was decided to rework the existing project and start mass production of the updated fighter. Initially, the updated version of the project was designated as Su-35BM, but later, with the beginning of serial construction, the fighters began to be called Su-35С. During the processing of the existing project, it was intended to radically upgrade the aircraft’s electronic equipment and bring its capabilities to the level of the “4 ++” generation. In addition, the project used some elements and developments characteristic of the next generation of fighters.

By design, the Su-35C is a typical member of the Su-27 aircraft family. Glider new aircraft was made on the basis of the previous project, but has undergone some changes. First of all, it is necessary to note the strengthening of the glider, carried out with the aim of increasing its resource. According to reports, the life of the airframe is 6000 hours, which will allow the fighter to operate for 30 years. Some airframe units of the Su-35S differ from the corresponding parts of both the Su-27 and the Su-35 of the first version. During the creation of the Su-35BM / Su-35 project, the designers of the Sukhoi company changed some details of the fuselage, wing and tail assembly. So, Su-35С has a vertical tail that differs from the keels of previous machines. In addition, the new fighter lost the brake flap on the upper side of the fuselage. As an air brake, the keels synchronously deflected to the outside are now used. 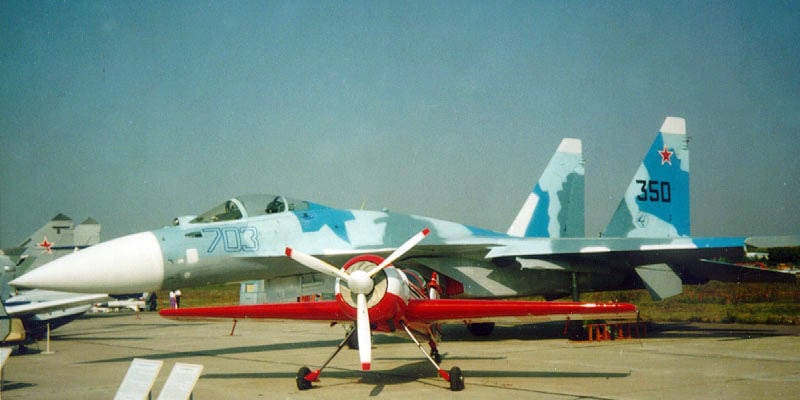 Su-35S aircraft are equipped with two AL-41F1С TRDDFs developed by NPO Saturn. These engines are capable of developing an afterburner thrust of up to 14500 kgf, and are also equipped with a thrust vector control system. This gives the aircraft high flight and maneuverability characteristics. In addition, for powering a number of systems, the aircraft is equipped with an auxiliary gas turbine powerplant TA14-130-35 with a power of 105 kW. The engines AL-41F1С provide the aircraft with high thrust-to-hand ratio. With a normal take-off weight around 25,3-25,5 tons, the value of thrust-to-weight ratio exceeds 1,1. In the case of maximum take-off weight (34,5 t), this parameter is reduced to 0,76.

With such indicators, the Su-35С aircraft has high flight characteristics. It is capable of speeds up to 2500 km / h at altitude and 1400 km / h from the ground. During the tests, it was established that a fighter without acceleration can accelerate to speeds above 1300 km / h. Su-35С has a practical ceiling of at least 18 km and a maximum range with outboard fuel tanks about 4500 kilometers. 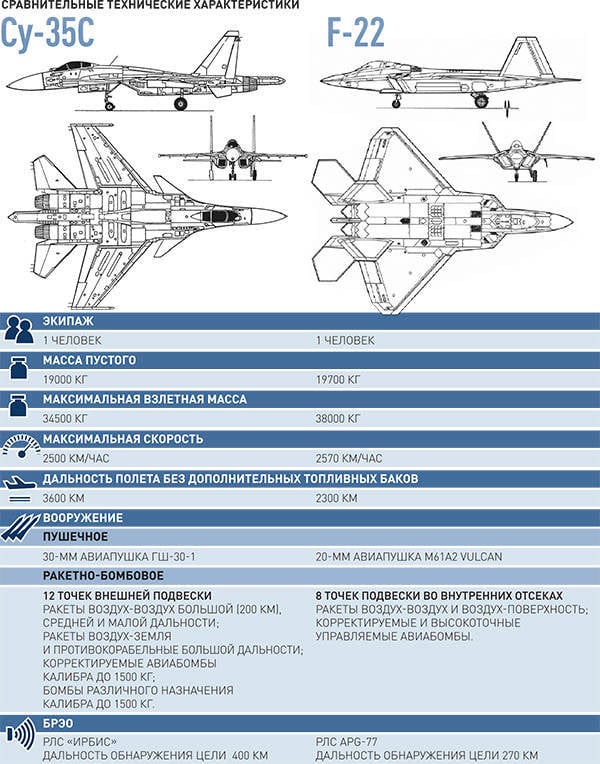 Su-35С is equipped with a modern complex of radio-electronic equipment, which includes the newest developments of the respective enterprises. The basis of the avionics complex is a radar with a passive phased antenna array H035 "Irbis", created by the Research Institute of Instrument Engineering named after V.V. Tikhomirov. The antenna array of this station consists of 1772 modules, which ensures operation in several modes: target detection and tracking, as well as terrain mapping. Depending on the parameters of the target, the 035 Irbis radar can find it at a distance of up to 400 km. The radar is capable of tracking up to 30 airborne and 4 ground targets, or providing 8 airborne attacks and ground 2 targets.

In addition to the radar, the Su-35S aircraft received an OLS-35 optical-location station. This station can detect targets in the optical and thermal imaging ranges. In addition, the OLS-35 has a laser range finder. According to reports, the optical-location station is able to find aircraft that do not use an afterburner, at distances up to 90 km, depending on the relative position of the fighter and the target. The maximum range, which can be measured using a laser rangefinder, reaches 30 kilometers. Station OLS-35 can simultaneously accompany up to four targets.

Like the previous aircraft of the Su-27 family, the new Su-35C is equipped with an electric remote control system. Also, the fighter’s electronic equipment includes active jamming equipment. 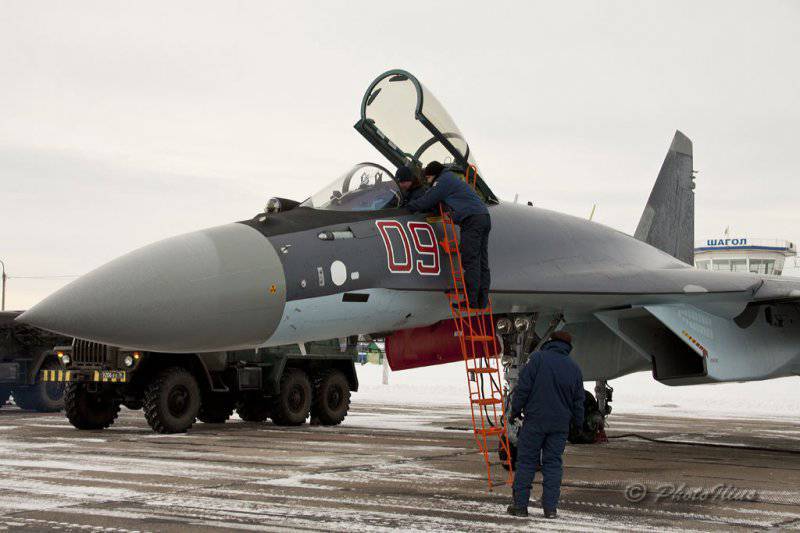 The built-in armament of the Su-35C fighter consists of one 30-mm automatic gun GSH-30-1 with 150 ammunition shells. Rockets and bombs are suspended on pylons under the wing and fuselage. 8 suspension points are located under the wing, 4 more - under the fuselage. At all nodes of the external suspension, the aircraft can carry several types of air-to-air missiles. Guided and unguided air-to-surface missiles can only be suspended on six nodes. Also, to defeat ground targets, it is proposed to use adjustable and unguided bombs of various calibers.

In the summer of 2007, the assembly of the first prototype of the Su-35BM / Su-35C aircraft was completed. 19 February next year, this fighter for the first time flew into the air under the control of test pilot S. Bogdan. In total, three flight prototypes were built, but only two of them participated in the trials. In April, 2009, the third prototype crashed during a speedy run. The cause of the incident was the failure of the engine management system. 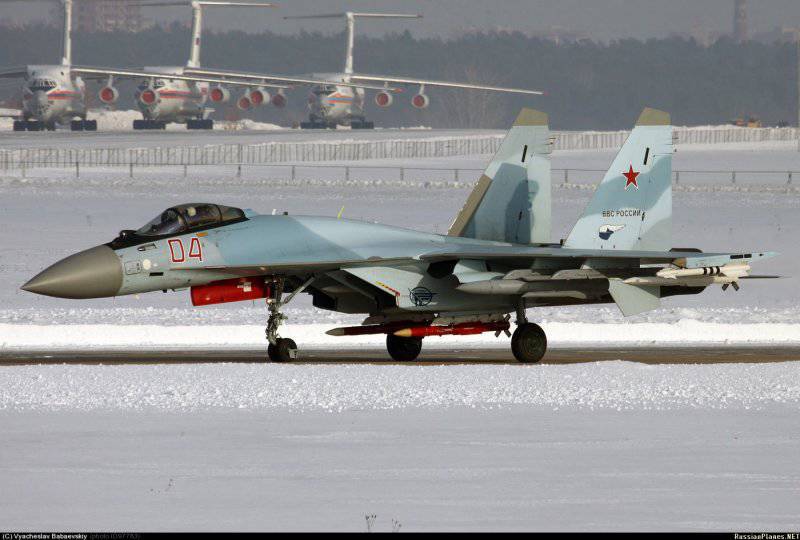 In August 2009 of the year, during the MAKS-2009 air show, the Ministry of Defense and the United Aircraft Corporation signed a contract to supply 48 Su-35C fighters up to 2015. Work on the implementation of the order of the military began a few months after signing the contract, in the autumn of 2009. The first serial fighter took off in early May 2011. In August of the same year, two prototypes and the first production aircraft were transferred to the 929 State Air Force Flight Test Center for conducting state joint tests. Already the first stage of testing confirmed the declared characteristics of the aircraft.

By now, including prototypes, no more than 12-15 Su-35C fighters have been built. In August of this year, there were reports that this fall the Air Force will receive 12 new aircraft. New fighters will go to serve at Dzemgi air base (Komsomolsk-on-Amur). According to various estimates, up to eight fighters are currently at various stages of production. Probably, they will go on tests and will be transferred to the air force only next year. 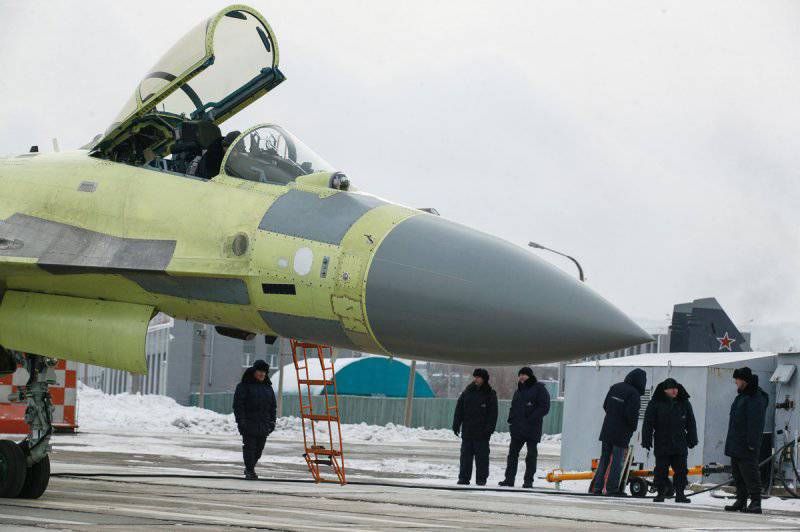 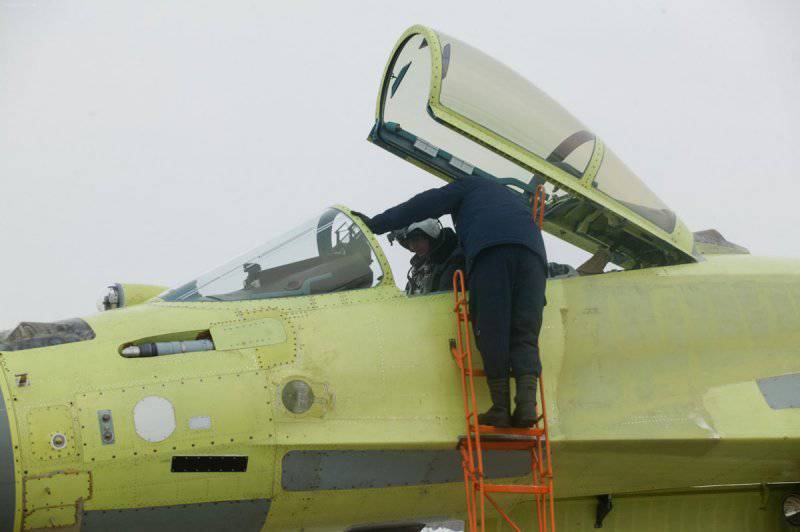 Specific data on the characteristics and combat capabilities of the new Su-35C fighter for obvious reasons are not available. However, already published information allows us to make some assumptions. The latest domestic airborne electronic equipment will allow the aircraft to efficiently find and attack airborne or ground targets. High flight data also have a positive impact on the combat potential of the fighter. Often there are estimates that the Su-35S can be compared with a number of parameters in comparison with the T-50 fighter currently under test. It is difficult to say how much such estimates correspond to reality, since a large amount of information about these projects is classified.

Regardless of the results of the comparison of the Su-35C fighter with the newest T-50, one can speak of the superiority of the first over the aircraft available in the troops. The difficult situation of the past years, due to which the air force has relatively old equipment, has had an impact on the potential of military aviation. In this case, the production and supply of the newest 48 aircraft will have a positive impact on the state of the air force. It should be noted that the Su-35С is not the only new type of fighter designed to increase the potential of the Russian Air Force. In 2012, two contracts were signed for the supply of X-NUMX Su-60CM and 30 Su-16М30 aircraft. Thus, if all the existing contracts and plans are fulfilled, by the end of this decade, the domestic air force will receive 2 Su-96С and 35 Su-76 fighters of several modifications. 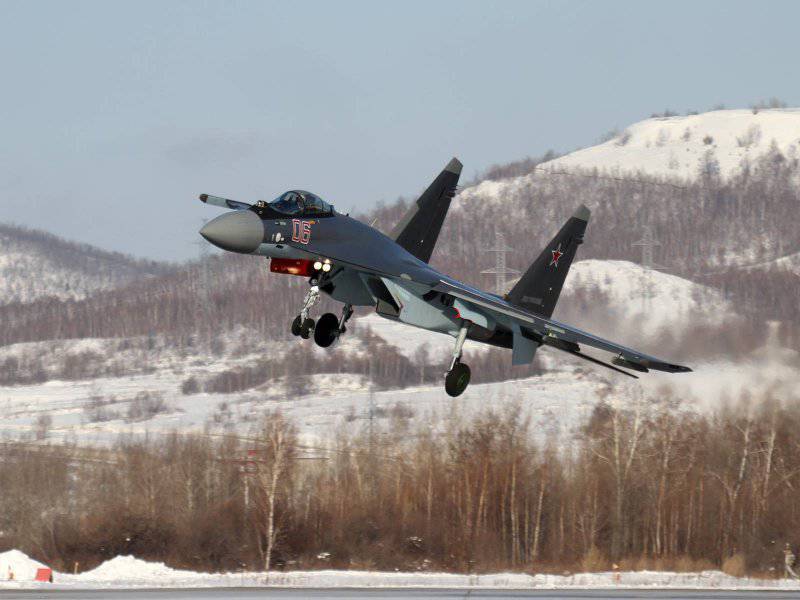 By the time the contracts for the supply of Su-35S and Su-30 are completed, the domestic aviation industry should master the mass production of new T-50, which will optimize the transition to the construction and operation of fifth-generation fighter jets. In this case, for a long time, Su-35C, having a resource of about 30 years, will serve along with the new T-50. Thus, in the coming decades, the Russian Air Force will use fighter jets of the 4 ++ and 5 generations, which should have an impact on the state of front-line aviation in general. 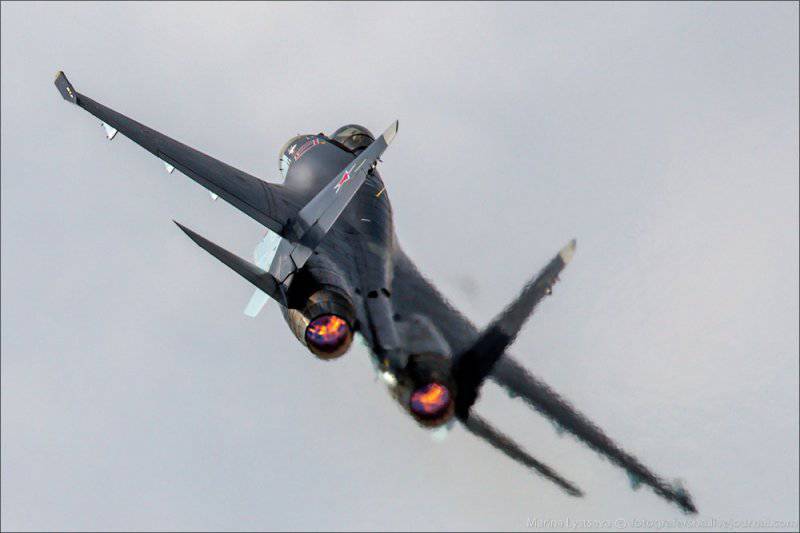