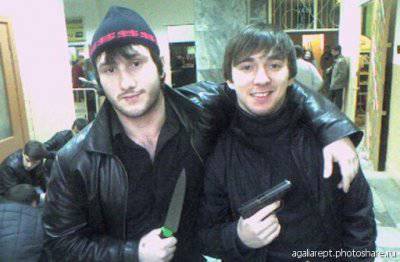 I'm standing in line for a movie ticket yesterday. In front of me are a guy with a girl, a young, cute couple. Something is actively discussed in a good mood. Then the girl turns around sharply, gives me a look, changes her face and immediately grabs her bag, checking if she is in place. Feels bag lock, whether it is closed. Then he whispers with his boyfriend. The behavior is absolutely clear: there is a hache in the back, the first thoughts that visited her, looking at me, that now she has something to steal.


As for today's young frostbitten Caucasians, this monkey behavior annoys me no less. But even more annoying to me is such a moment that they mix me up with them and perceive them the same way.

Young Caucasians from poor families see the only possible way to make money for themselves through theft, robbery, protection and car theft. And those who have panamers and money, which by the way are issued by parents (and parents, in turn, receive money from the “subsidies to the Caucasus”), they use this money to show off the monkey. And it can not annoy.

I myself have the desire that they should not just be removed from here somewhere in a mountain village, but also applied the most severe measures to them! Maybe something will come to them. Their evolution will be accelerated by the whip method.

My Russian friends regularly ask me the same questions as to why they cannot reason a little as sane people. Why behave like a dead beast. I have many friends working in the restaurant and club business. If someone opens a restaurant or club, then the first rule that they designate in front of face control is (I quote literally): “don't let blackness, hache and beasts off you!”. And the most disturbing passengers are Chechens and Dagestanis in the first place.

In Moscow, units of expensive institutions where the Caucasus are allowed, and they get there only if they are other Caucasians acquaintances or relatives. By the way, it gives a lot of trouble to the co-founders. Because of these “kindred bonds” from the series “my sons will come to you now, they will celebrate their birthday”, he cannot but let him go. But then it turns out that the fight begins, screams, lezginka, bull talk, harassment of women and there is an outflow of clients from the institution. Here, kinship with influential friends and relatives comes into conflict with business interests. And even the co-founders understand and as a result they themselves are trying to weed out all this beast. If allowed, then the sons of closest friends or relatives.

This behavior can not annoy. And I understand the natural reaction and the desire of the locals to drive everyone out of their country. Nobody likes coming to your house, they spit on you and impose their customs. And doing all this is not correct, but in a rude manner. Not surprisingly, they want to expel or shove them into the gas chamber, and poison them. I already have a “visitor complex”, I always see from my eyes that they are expecting the typical behavior of a stupid beast. But after a while people break pattern. Like hach, while in tattoos, walks not in moccasins with white socks. It seems there is no incomprehensible behavior and aggressive gestures; doubts first appear. And after intercourse, the situation is completely smoothed out, the person’s negative balloons are released and the rolls relax. I do not bother people, I do not behave like a pig, like “uh, listen, Vasya, bring-you-go-go-from here-don't-bother!”. This relationship has never been. But unfortunately, it is not a minority that forms an opinion about the Caucasus, but vice versa.

From above, they are trying to present this as point skirmishes, saying here it is inappropriate to talk about some kind of national hostility. Everything is hushed up. In fact, it is perfectly clear to everyone that it is precisely because of this that everything arises. The difference in mentalities and attitudes towards life. When you behave like a frostbitten pig, and even at a party, no one likes it.

It all ends with the fact that there will be a civil war in one form or another. Such guys as Tesak (Maxim Martsinkevich) and other nationalists will gather more and more supporters, and sooner or later the animals will begin to crush like bugs and force out. They do not understand that they are not just a minority, but they can be destroyed in one fell swoop. Boiling point can occur at any time.

I understand how they think and reason. What time there is money and some kind of connection with the cops or the state. level, then always pay off or decide the issue in their favor. This momentary force, which is presently present, it gives confidence. But in fact, this is all short-sighted. This bestial behavior can be stopped at any time. Moreover, if the people rise and present it to the authorities, then that will be their first and soak in order not to lose their power.

But while everyone is trying to smooth out. Thus, only heighten the situation. And maybe they do not know just a way out of the situation, so everything starts up to nothing. But sooner or later the match with gasoline comes in contact, a fire with an explosion will occur. What will be the consequences is unknown, but it will be. I can see how the mood of the Russian guys is heating up; they don’t like it all. Even if they cooperate with someone from the Caucasus, this is all a simulation for the sake of money. In fact, the attitude is very categorical. And this categoricalness is already turning into hate. What the hell are they really doing here, let them go to their mountains and show off there.

There are all sorts of hypocrites like Heydar Jemal. They say that "this is all a provocation of the special services." Say, Caucasians are peaceful sheep, and all their affairs are only our hallucinations. The feeling is that Jemal is just working off someone's grandmother. It can be seen that a clever man, on philosophical topics argues very interesting, deeply digs. But as for Islam and the Caucasus, it carries some kind of nonsense. Taratorizes patterned conspiracy theories. I do not know, for the sake of provocation, whether it really believes, or fulfills. But those who are in real life in contact with all this, these tales will not work on them. They will only affect the Muslims and Caucasians themselves, who convince themselves of how wonderful they are all. Say, well done Dzhemal, bears the truth!

But what the hell is a “provocation of the special services”! There is no need for any provocations, when there are no brains, they are behind the evolutionary point of view, they believe in some ancient Arabian fairy tales, they do not comply with the laws. They behave like archaic savages, no provocations are needed here, they do everything themselves. And all this in the modern world. How can a normal modern society take it all in?

Of course, I will treat with understanding when they start beating and chasing them. If something like a civil war begins, I even understand that I, too, are other normal guys who have a negative attitude towards them, in any case they will fall under the hand. Because there they will no longer ask, is it a normal hach ​​or a wild frostbitten monkey.

Now I can only try to convey all this to those guys from the Caucasus who are in contradiction, understand everything, but cannot admit to themselves because of the close environment. There is an impact on the young man by relatives. This eastern picture of the world has been built in since childhood. If initially there is no questioning, some prerequisite to the fact that a person will dig, be interested, then he will remain such a savage. Maybe it will reach some guys, they will rethink the situation, draw conclusions and already choose between wildness and civilization. Because there are guys, but there are very few of them, which all this is also terribly annoying. They have to put up with relatives, because from them there is a direct or indirect dependence. And they make a good face on a bad game.


Now they will write to me that “there is enough idiots in every nationality, there are good and bad everywhere”. No, let's talk openly. Yes, there are idiots everywhere, but the number of wild scumbags in Eastern culture, in the Caucasus and the Middle East is disproportionately large. There, their number already rolls over. If one for a thousand simulates study, and another for one hundred thousand really learns and achieves something, then everyone else, like living under barbarous times, also lives now in the 21 century, no different from savages with clubs. This wild beast in faces of Caucasian nationality discredits all normal ones, even though they are few. As a result, everyone is treated equally and this contempt only increases. It won't end well.

And, by the way, the Americans are doing that they are "planting democracy" in the Middle East, although they pursue their purely commercial goals. Although the price of the question there is a huge number of victims, but historically it will probably be beneficial. It is clear that after each war, the Americans leave behind only chaos. But at least there is hope that the situation is destabilized and a thinking minority can manifest itself, which cannot lift its head in peacetime, because around tradition, customs and relatives, they spread rot and do not allow themselves to be shown. And during this destabilization they will at least have a chance to change something for the better.

Ctrl Enter
Noticed oshЫbku Highlight text and press. Ctrl + Enter
We are
Dmitry Puchkov: You can’t defeat someone’s propaganda - organize and lead your own.What you didn't want to know about England
273 comments
Information
Dear reader, to leave comments on the publication, you must to register.