Transnistria with the Russian tricolor?

October 17 2013
45
Recently, the theme of state flags has been vigorously debated on the territory of Moldova and the Pridnestrovian Moldavian Republic. The fact is that news from Tiraspol came about the desire of the authorities of the republic, in addition to the national banner, to use a flag called the flag of national unity. Among the co-authors of the new version of the flag of Transnistria, according to some sources, is the president of the unrecognized state Yevgeny Shevchuk, as well as deputies of the Supreme Council, including Andrei Sipchenko.


The flag of the national unity of the Pridnestrovskaia Moldavskaia Respublika, as the authors of the idea of ​​its creation and approval inform, will be used on a par with the state one. The national flag of Transnistria is a rectangular red cloth, in the middle of the rectangle there is a green stripe (the full length of the flag). In the upper left corner of the flag are the sickle and the hammer, above which is a five-pointed star. This flag, approved in Tiraspol in September 1991, became a copy of the flag of the Moldavian Soviet Socialist Republic.

The flag of national unity, which may appear in the country after the adoption of an appropriate decision of the Supreme Council of the TMR, according to the authors of the idea, will symbolize the quote:

consolidation of the people of the Pridnestrovian Moldavian Republic in the name of consolidation with the Russian Federation.

As a basis for the new cloth, it is proposed to choose the Russian flag (in the same colors and proportions), and in its upper part a symbol will be added, which will be chosen according to the results of the contest held by the Heraldic Council under the President of Transnistria. 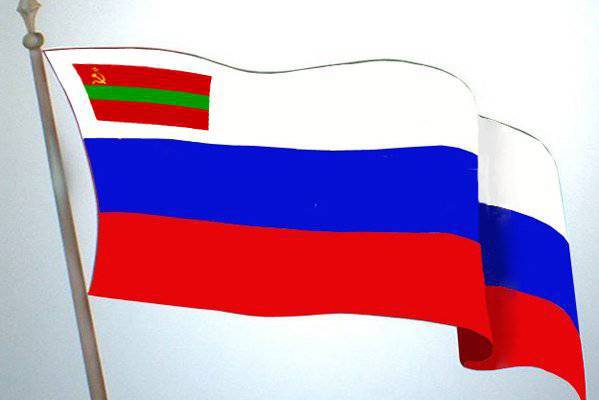 The Supreme Council of Transnistria publishes information called “Together with Russia”, in which Andrei Sipchenko (the author of the draft law) speaks of a new flag as an expression of the desire of supporters of Transnistrian residents for unity and territorial accession to the Russian Federation. At the same time, the authors of the draft law on the flag of national unity refer to the results of the referendum, which were held in the MRT in 2006 year. Then the inhabitants of the Pridnestrovskaia Moldavskaia Respublika answered two questions presented in the bulletins.

1 Question: Do you support the policy of independence of the Pridnestrovian Moldavian Republic and the subsequent free accession of Pridnestrovie to the Russian Federation?

2 Question: Do you consider it possible to renounce the independence of the Pridnestrovskaia Moldavskaia Respublika with the subsequent entry into the Republic of Moldova?

It should be noted that Russia recognized the legitimate referendum and its results, but, for example, Ukraine and Moldova didn’t recognize the legitimacy of the plebiscite, which, by the way, was easily predicted.

It is noteworthy that the idea of ​​using the colors of the Russian state flag as an object of state symbolism is not new in Transnistria. More than four years ago (in May 2009 of the year), the Renewal party (the ruling party in Transdnistrian Moldavian Republic) and a number of public organizations had already submitted a bill to parliament. Then the adoption of the law did not take place. According to unconfirmed information, in 2009, the leadership of Russia, without much enthusiasm, took this initiative from Tiraspol. Then we restarted with the American "partners" ...

The information that Transnistria is going to use variations on the theme of the Russian state flag as state symbols has once again provoked a strong reaction in Chisinau. Moldovan politicians say that the idea of ​​Tiraspol is the idea of ​​separatism and exacerbation of the situation on the banks of the Dniester. Naturally, there are quite a few Moldovan politicians who say that Tiraspol is pushing Russia to accept the “flag of national unity”. True, for some reason these people do not say that quite recently the Chisinau mayor Dorin Chirtoaca expressed the idea to remove the coat of arms from the central strip of the Moldovan national flag, which would make it an exact copy of the Romanian flag. This idea in certain political circles of Moldova, by the way, is still under discussion ...

If we talk about variations of various flags, and variations similar to the flag of Russia, the flag of the national unity of Transdniestria may not be the only one (talking, of course, about its appearance) of a kind. There are many countries on the planet that use the same arrangement of colored stripes on their national flag with additions in the form of coats of arms. For example, Slovakia and Slovenia. The flag of Serbia is a reflection of the Russian tricolor (also with a coat of arms). And there is also an unrecognized state on the planet, the flag of which in general is an exact copy of the national flag of the Russian Federation (in its version of the beginning of 90): the unrecognized state of Azania (officially the state of the African state of Somalia). There are enough variations of the flags of other states. Although the initiative of Transnistria is still a completely different matter, which has nothing to do with the usual coincidence of color stripes on the flag ... Here the idea is of a completely different nature, and one of the authors of its idea, as they say, explained it popularly.

If the bill is adopted, and the Pridnestrovskaia Moldavskaia Respublika will have a flag “with a Russian slant” and even equivalent to the state one, this will obviously add pepper to the relations of Tiraspol and Chisinau, which (Chisinau, of course) does not intend to consider the PMR. Interesting in this regard is the position of the Russian authorities, because simply to keep silent here is unlikely to succeed.

In an express interview with the Military Review publication, the head of the Transdniestrian Foreign Ministry Nina Shtanski said that she supported the initiative to create a flag of national unity:
I support! And I know that the initiative is supported by broad public circles. A.Sipchenko already put forward her during the presidency of Smirnov, at the same time there was also an initiative to introduce ross.rulya, for which there was a negative opinion of the President
.

Ctrl Enter
Noticed oshЫbku Highlight text and press. Ctrl + Enter
We are
Moldovan independence: 24 of political uncertaintyRussian peacekeepers again want to "demobilize" from Transnistria
45 comments
Information
Dear reader, to leave comments on the publication, you must to register.