“Jazz” in the spirit of the “cold war” 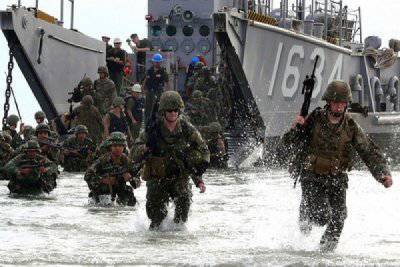 The NATO strategic maneuvers Steadfast Jazz 2013 (“Stuntfast Jazz-2013”), which will run from 2 to 9 in November in Poland and the Baltic countries, will allow “to work out the deployment of the Alliance's Rapid Response Force anywhere and repelling any threat”. This was announced recently by NATO Secretary General Anders Fogh Rasmussen.


Preparation for them entered the final stage. Thus, at the training ground of the Polish Ground Forces Training Center, located near the town of Dravsko-Pomorski, more than 300 Polish and French soldiers complete the deployment of command and control centers, communications systems and field camps for the multinational forces of the alliance. It is expected that 6 thousands of troops from 20 countries will take part in NATO maneuvers, some of which are members of the alliance, and some of them are non-Allied partner countries. For example, Ukraine, for example, will send a subdivision of an amphibious assault force to participate in Steadfast Jazz (“Resistant Jazz”).

The Steadfast Jazz 2013 drills will be combined with the Baltic Host 2013 drills, during which the readiness of the Baltic countries to accept NATO allied forces who will come to their aid in crisis situations will be evaluated. “Our military and civilians from other ministries and departments will ensure the ability to act together not only across the region, but with all the forces of the alliance.” This will markedly improve the readiness of the Baltic countries to provide assistance to the forces of the allies, ”said Juozas Olyakas, Minister of State Protection of Lithuania, in this connection.

It is impossible not to draw attention to the fact that the exercises “Stedfast Jazz-2013” will be the largest NATO maneuvers over the past 10 years. Their official goal is to "test the capabilities of command and control, as well as the joint actions of the NATO rapid reaction forces." The exercise scenario provides for a joint response of the Allied forces to a foreign invasion. Analysts of the alliance also note that a significant amount of forces and equipment involved in the exercises will help to alleviate the Baltic countries' concerns about their collective defense. As French Deputy General Michel Yakovleff, the Deputy Chief of Staff of the Joint NATO Command in Brunsum (Netherlands), stated, the scenario of the Stedfast Jazz exercise will also include a reflection of a large-scale cyber attack on NATO countries.

According to the representatives of the alliance, the exercises in Eastern Europe will reflect the new situation after the upcoming withdrawal of NATO troops from Afghanistan next year, after which the Alliance again intends to focus on protecting the territories of its member countries. “Over the past 10 – 12 years, we have gained tremendous experience in carrying out missions against rebel movements,” said American General General Philip Bridlove, Commander-in-Chief of the NATO Joint Armed Forces in Europe. “Now we must maintain readiness for higher-class military operations.”

Incidentally, Lieutenant-General Donald M. Campbell, the commander of US forces in Europe, said about the same thing recently. According to him, the exercises “Steadfast Jazz” are organized within the framework of the NATO concept “Initiative - united forces”, which sets the task to maintain a high level of combat readiness, including after 2014, when the NATO mission in Afghanistan ends. Steadfast Jazz 2013 is a great opportunity to show how we can be united, how we can learn from each other - from NATO member countries and from other European partners, ”he said.

However, analysts point out that the “Resistant Jazz” exercise will be a real test of the effectiveness of NATO’s plans to protect the most vulnerable areas of Eastern Europe, developed at the beginning of 2010. According to them, in the case of armed aggression against Poland or the three Baltic states, nine divisions should enter into battle - from the United States, Britain and Germany. Naval landing forces, as well as warships from Britain and the United States, must arrive at the northern ports of Poland and Germany. And the first echelon will be the NATO rapid reaction forces, which are at the disposal of the Alliance command for a prompt response to military crises. They consist of NATO military 28 contingents and individual partner countries, provided on a rotational basis for one year.

Observers also note that with the advent of these plans, the military activity of the United States and NATO at the western borders of Russia and Belarus has increased markedly. For example, last year in February, the command-staff exercises of the German-Danish-Polish Army Corps for the Rapid Deployment of NATO Combined Forces “Little Needles-2012” were held on the territory of Poland in September, in September - the integrated tactical exercise “Anaconda-2012” with the participation of operational teams from the same corps, the 2 of the Canadian Mechanized Brigade Group of Canada and the 18 Brigade of the US Military Police, in November - the maneuvers of the Weimar multinational combat tactical group of the EU “Command Command-2012”, as well as teams on-staff exercises of special operations forces and NATO armed "Puma-2012» forces of partner countries.

Not an exception and 2013 year. Right now, the teachings of Steadfast Jazz are coming. It should be noted that representatives of NATO, in particular General Breedlove, emphasize that Russia is not implied on them as an enemy. “In the interests of building confidence, we invited officers of the Russian Armed Forces to visit the Stedfast Jazz exercise as observers,” the general said.

Information sharing through the presence of Russian military specialists at NATO exercises, like NATO officers at Russian exercises, is extremely useful for both sides. This was stated by the Permanent Representative of the Russian Federation to NATO, Alexander Grushko. However, as he noted, Russia still has questions to the very design of the “Stedfast Jazz” maneuvers, which will be held in close proximity to the Russian borders and suggest working out actions in the event of an external attack on one or several NATO countries.

In turn, Deputy Defense Minister Anatoly Antonov at a meeting of the Russia-NATO Council expressed doubts that the exercises “Stunt jazz 2013” would contribute to the growth of trust between Russia and the North Atlantic Alliance. “The Russian Defense Ministry was puzzled by the stated goal of these exercises, involving the use of the 5 article of the Washington Treaty on Responding to Aggression against Poland. From these teachings breathes the spirit of the "cold war", - said Anatoly Antonov.