October 16 2013
24
Junkers EF.128 fighter project was developed by German aviation Junkers in February 1945. The company from Dessau had, like Dornier, a fairly large experience in the design and conversion of bombers into three- and four-seat night fighters. Options C, R and G Ju are widely known. 88, which in large enough quantities were transferred to the front. Later, working on Ju projects. 188R and especially over Ju. 388 J, Junkers engineers wanted to create an aircraft that would replace the Ju. 88. However, work on these projects did not lead to a positive result. According to experts, all of them lacked maneuverability and superiority in flight qualities, which would allow him to compete on an equal footing in the Mosquito air battles.


Professor Heinrich Hertel, who led the development work at the firm "Junkers", tried to improve the flight qualities of the heir Ju. 88 by installing a turbojet engine on it. Approximately in the same direction, the designers of the Heinkel company worked, who in September 1943 installed an additional BMW 219 engine for one He003, achieving an increase in the speed of the car on 60-70 km / h, when flying off the ground. But all these experiments did not lead to final practical results.

When at the end of January 1945, the Luftwaffe described in detail their ideas about the night fighter of the future, including Junkers in the competition for its creation, Gertel made a new technical proposal based on a project of a fundamentally new for the company EF128 fighter, which had previously made a very good impression on representatives of the main commission of development work. This fighter was a smaller and very difficult in terms of aerodynamic solutions, which had little to do with the previous models of the Junkers night fighter. 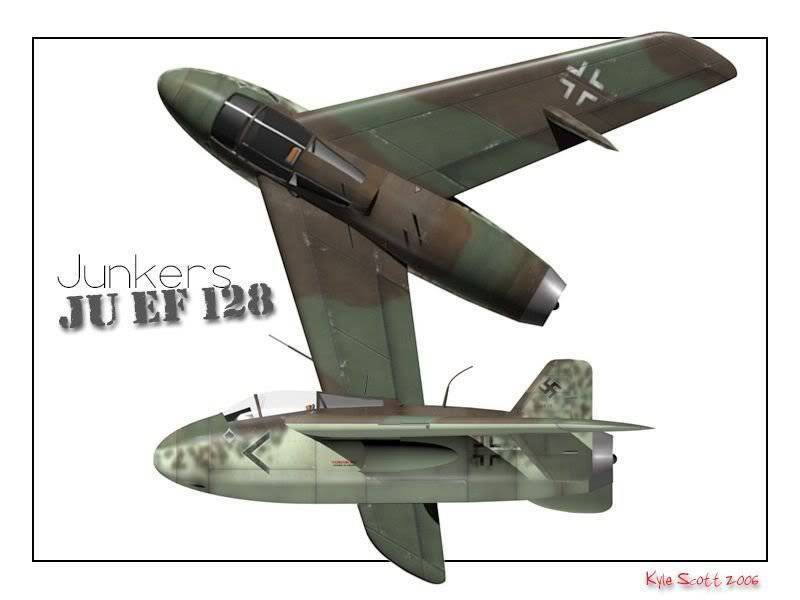 Explaining the features of his 27 and 28 project in February 1945 of the year, during a speech before the main development work commission, Heinrich Hertel drew attention primarily to the favorable location of the vertical tail of the aircraft, which, like the Gotha and Aradot machines , also performed the functions of aerodynamic ridges, which increased the efficiency of the ailerons. He saw a significant advantage of his project also in the use of an “all-terrain swinging chassis”. And the proposed "tactical brakes" in the form of 2-x large turbulent flaps, located in the rear fuselage of the aircraft gained widespread in aircraft after the end of World War II. Some serial American jets, for example, the F-84 Thunderstrike, F-86 Saber or F-101 I Will, they were present, but in a slightly modified form.

Fighter Junkers EF.128 had air intakes that were located on the sides of the fuselage. This was done in order to eliminate the use of the traditional scheme with a tunnel air intake passing through the nose of the fuselage. This design solution has allowed to lay in the project of a new fighter a very convenient and spacious cockpit. Wooden wings had a straight sweep in 45 degrees. They were placed 2 small vertical keel with rudders on the rear edges. The wing tanks contained 540 liters of fuel; in addition, 1030 liters of fuel were also in the fuselage tank behind the pilot’s cabin.

A spacious aircraft pressurized cabin was supposed to get an ejection seat, and a good booking was also envisaged, which was supposed to protect the pilot from getting hit by 12,7-mm caliber bullets in the front and 20-mm projectiles from the rear. On the plane it was planned to put a Heinkel-Hirth HeS 011 jet engine and 2 30-mm MK 108 cannon, which were to be located on both sides of the fuselage nose, 100 ammunition for shells on the barrel. At the same time in the future it was planned to install two more of the same guns. 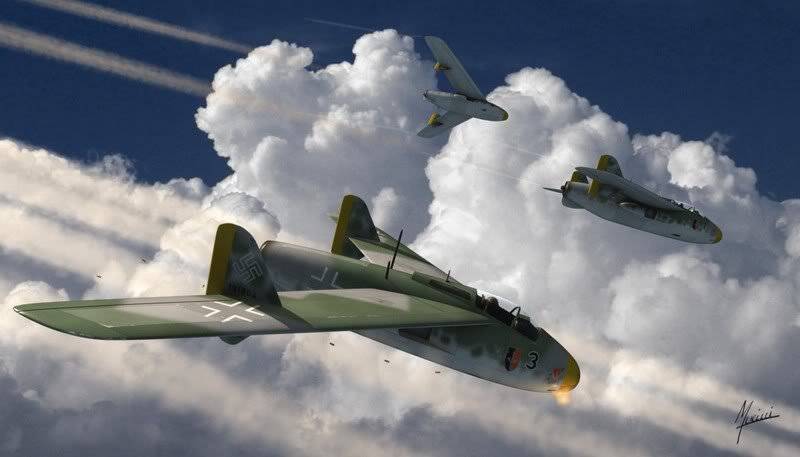 As a result of testing and purging models of a fighter in a wind tunnel, German engineers got pretty good results. In favor of the EF 128 fighter, the achieved maximum flight speed, as well as various options for technical equipment (placement of search and firing equipment on board, isolated weapons compartment). To conduct further tests and work on the project, a fuselage layout was made, on which HeS 011 engines were installed. This instance was planned to be tested in natural conditions, by installing it on top of the Ju 88 bomber. In the course of work, a variant of the all-weather night fighter also appeared, which was distinguished by an elongated fuselage and a cabin for the second crew member, but this project was not completed until the end of the war. At best, mass production of the Ju EF 128 could begin in the second half of 1945, but for obvious reasons this never happened.

Description of the design of the fighter

Junkers EF.128 is a jet fighter, made under the scheme vysoplana tailless and having a swept wing. The wing of the aircraft was a detachable design with 2 wooden spars. Wing consoles were used to install fuel tanks in them. The ailerons simultaneously performed the role of elevators. The vertical tail of the fighter was located on the upper and lower surfaces of the edges of the wing at the inner borders of the ailerons.

The fuselage of the aircraft was all-metal. In the front end of the fuselage was located nose landing gear and additional special equipment. Next was a sealed cockpit, a compartment for the main landing gear of the aircraft, as well as air ducts. At the rear of the fuselage was a power plant and another fuel tank. The main and nose landing gear were made in the form of levers and had pneumatic depreciation. Chassis pneumatic drive. The dimensions of the front pillar wheels are 465 × 165 mm, the main racks are 710 × 185 mm. To reduce the path length during landing fighter had to be equipped with a brake parachute. 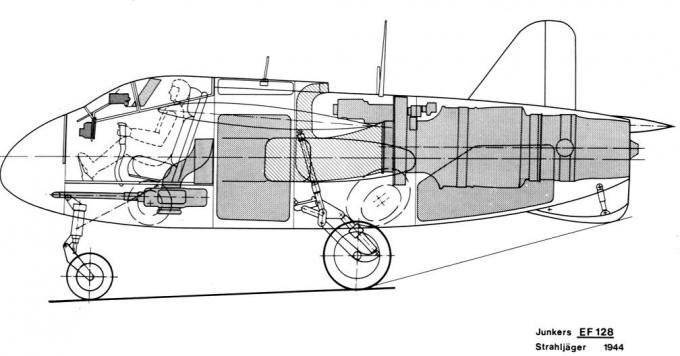 The HeS 109-011 turbojet should have been installed in the rear fuselage. Access to the engine was carried out by dismantling the rear upper section of the fuselage skin. Air intake for the operation of the engine was carried out through air inlets located on both sides of the fuselage, under the wing. At the expense of the designed stepped protrusion, regulation of the flow of the boundary layer of air at the tip of the cockpit was provided. In the wing of the aircraft housed unprotected fuel tanks with a capacity of 540 liters. Another 1030 liters of fuel was in the 2-x-protected fuel tanks in the fighter fuselage. Aircraft equipment was standard for fighters of the time; a fire extinguishing system and an ejected pilot seat can be distinguished separately.

The armament of the aircraft consisted of 30-mm aircraft cannons MK 108 and could be expanded over time to 4-x guns. MK 108 guns were located in front of the fuselage under the cockpit.

Ctrl Enter
Noticed oshЫbku Highlight text and press. Ctrl + Enter
We are
That.154. Wooden "Anti-Mosquito" LuftwaffeLong-range patrol interceptor Tu-128 (Part of 3) Operation and application
24 comments
Information
Dear reader, to leave comments on the publication, you must to register.