France's last chance to save himself 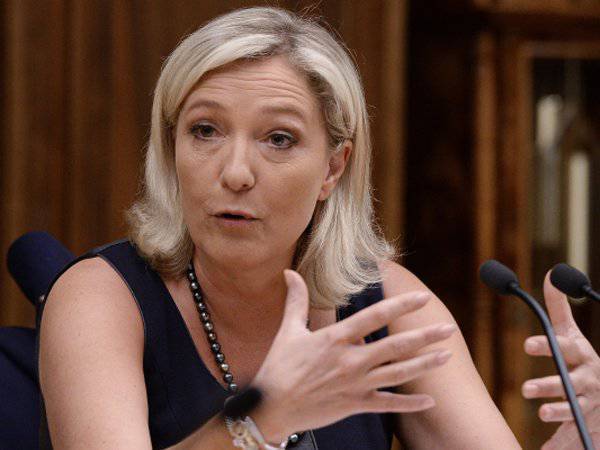 Gradually, representatives of traditional values ​​are gaining strength and in this you can see a chance for salvation for Europe and France. The right-wing “National Front” under the leadership of Marine Le Pen has significant chances to win the regional and European parliamentary elections of the 2014 of the year, such conclusions can be made from the latest opinion poll conducted in France.


In the second round of the local elections in the city of Brignoles in the Var department, the majority of voters cast ballots for the candidate from the “National Front” Laurent Lopez - 53,9%. His rival, representing the center-right party Union for the Popular Movement (SPND), unites supporters of former President Nicolas Sarkozy, Catherine Delzer scored 46,1%. The socialist party itself did not participate in the elections. In the first round, the socialists called for a vote for the Communist candidate, while in the second round they supported the SPND candidate to put a barrier in the path of the National Front. However, voters did not respond as much as the socialists would have liked. In the first round, the extreme right (National Front and Party of France) received 49,5% of the votes, the center-right candidate - 20,8%, the left - 20,5%.

Although Brignoles and a small city with a population of about 20 thousand people, but this victory of the "National Front" has great symbolic significance. Front Leader Marine Le Pen does not hide his joy. According to her, there was a "real turn", when more and more citizens of the country begin to see in the NF a force that can not only compete on equal terms with other parties, but also claim power in France. After the victory in Brignoles, Marine Le Pen said: "Now our task is to come to power."

The success of the NF has become a serious warning to both leftist forces, first of all the ruling socialist party in France, and moderately right, since only five months are left before the municipal elections, which will hold 2014 in March. Disappointed head of the SPND center-right liberal-conservative political party, Jean-Francois Cope, expressed dissatisfaction with the activities of the previous communist mayor, as the deplorable state of affairs in the city and the “sectarianism of the socialists”, which did not support the Union for the Popular Movement, affected the elections. In the Socialist Party mourning moods. Party members of President Francois Hollande are worried about future elections - regional 2014 in March and June elections to the European Parliament. The socialists do not expect anything good from them and blame their green allies for Brignole for refusing to speak with the communists, and because of this they could not nominate a single candidate.

Disappointed voters begin to shift to the right. Moreover, the Union for a Popular Movement party, Jean-François Cope, doesn’t get their voices for the most part, people are beginning to support the party of Marine Le Pen. According to a poll conducted by Ifop for the newspaper Le Nouvel Observateur, 24% of French voters are ready to cast their votes to the National Front in the elections to the European Parliament. Thus, the party of Marine Le Pen was two percent ahead of the Union for the Popular Movement - 22%, and the Socialist Party by five percent - 19%. In addition, opponents of the National Front are also worried about other social sections. So, Marine Le Pen entered the top three most popular politicians in France. For the first time, 33 percent of French citizens were in favor of the head of the National Front playing an important political role in the life of the state.

According to Euronews, this is a real breakthrough for the NF, which received only 2009% of votes in the elections to the European Parliament in 6,3. In 2009, the National Front received three mandates. The Spanish newspaper El Pais is sounding the alarm: “The diving data does not explain the most important thing - why for the first time in stories, the ultra-right and populist party, founded in 1972, by Jean-Marie Le Pen, moved into first place in national politics. ”

It is clear that the poll and the victory in the elections in the city of Brignoles do not mean an unequivocal victory in the elections in the year 2014. But they reflect a certain political trend. In the regional elections in March 2010, the National Front (led by Le Pen) went to the second round of voting in the 12 regions. As a result, the NF collected about 2 million votes - 9,1%. Especially actively voted for him in the regions where the population most clearly sees the danger of the influx of migrants - in the Mediterranean regions of France. In the North-Pas-de-Calais region, where the local list was headed by Marine Le Pen, the NF received 22,2% of votes, which gave him 18 from 113 seats in the regional council (for comparison, in 2004, the party received only 5 deputy seats ). Marine Le Pen achieved impressive success in the 2012 presidential election of the year, when she won nearly 20% of the vote.

Marine Le Pen can also be credited with an impressive increase in the size of the party - the National Front has grown three-fold to 70 thousand people, overtaking the socialists and center-right. This success is due to several reasons. First, this is the work of Marine Le Pen and her team, who have made significant efforts to rid the National Front of its “dark”, radical appearance. The leader of the NF promised that she would seek, through the courts, that her movement should no longer be called ultra-right. Marine Le Pen told reporters: “We are by no means a party of the far right, and those who think otherwise make a huge analytical error. I will seek a court decision stating that the definition of “ultra-right” is derogatory and is used deliberately to damage the reputation of the “National Front”. With this, she emphasizes that the “National Front” cannot be put on a par with the Greek right-wing “Golden Dawn” or the admirers of the A. Breivik Manifesto. In addition, there was an update of the manual, where "fresh blood" has joined. Marine Le Pen herself is a relatively young, charismatic person who attracts people.

Secondly, it is the futility of programs, both center-right and socialists. Neither the former President Sarkozy (the protege of the Union for a Popular Movement), nor Hollande (the Socialist Party) could bring France out of the impasse, the state is sinking deeper into the swamp of the systemic crisis that has engulfed the entire Western world. The socialist government cannot solve the problem of mass migration. Thus, the Minister of the Interior, Manuel Waltz, recently called for curbing Gypsy and African immigration, and then under pressure from the liberal public began to justify himself, saying that he was misunderstood.

The socialists, trying to preserve their constituencies, are in fact rushing from side to side. Prime Minister Jean-Marc Herault said that he did not oppose the creation of a special settlement for Gypsies in the 16 district of Paris. 16-th district is considered prestigious, rich people, foreigners live here, diplomatic representations are located. The question of creating a special Gypsy settlement (actually a ghetto) was raised by deputies of the lower house of parliament from the Left Front.

The attractiveness of the NF especially grew among the working class and the elderly, who had previously focused on the Socialist Party and the liberal-conservative party. Sarkozy and Hollande did not justify the confidence of those who voted for them. They could not reduce the unemployment rate, resist the policy of “tightening the belts”, reducing state aid, programs, and solving the problem of the influx of migrants in the growth of crime. Hollande, instead of the expected support of the population, announced the largest reduction in government spending in the history of France in 2014. Since 1981, the socialists and the center-right change each other in power, having the confidence of the population and time for fundamental reforms, but they have failed. The French have become disillusioned with the former political elite and want to try the right to realize their intentions.

Third, people are attracted by the program of the “National Front”, which promises a way out of the hopeless situation in which France has fallen (and all of Europe). The program is based on several provisions: 1) stopping further influx of migrants from non-European states and tightening the requirements for obtaining French citizenship, repatriating part of foreigners to their homeland; 2) a return to traditional moral and cultural values, which implies the preservation of French culture and the assimilation of existing newcomers, and not the erosion of the national culture; support for large families, restriction of abortion, etc .; 3) greater independence of France from the European Union and international organizations; 4) curbing crime and ensuring the safety of the population, it is proposed to restore the death penalty and toughen penalties for most crimes; 5) protectionism in foreign trade, the protection of ordinary people, not banks and the rich.

All of these points are fully applicable in Russia, which, due to the stupid and even criminal policies of the central authorities over the past two decades, has faced the same problems - erosion of the Russian ethnocultural core, as a consequence of the increasing processes of destruction of Russian statehood, the introduction of "cosmopolitan" principles contrary to the Russian matrix of being, the massive influx of alien alien to Russian culture from the rapidly spreading regions of the former USSR.

In general, the National Front program is aimed at preserving French identity, the party explicitly states that the indigenous French have the right to preserve their traditional culture. Cosmopolitan and multicultural projects, supported by socialists and right-centrists inside the country and international structures, are killing “old France”. The ethnocultural situation in the country begins to change right before our eyes and with the further development of the situation along the same lines, traditional France is doomed. In the past, one can find many examples of how the ancients, having a developed culture, nations perished, giving way to the sun under a less developed, but more resilient and passionate alien. Now this disastrous process has affected the whole white race in general, and France in particular. Obviously, this process is not accidental, but is supported by certain world circles that are working to create an obedient human individual that does not have racial, national roots that are alien to human morality.

This trend, challenging the neoliberal vision of the future of the planet, can be seen in the fact that the national pride of France, actor Alain Delon, supported the activities of the National Front. Alain Delon gave an interview to the Swiss newspaper Le Matin and supported the game Marine Le Pen in it: “... the breakthrough of the“ Front National ”is very encouraging. People knew another France under de Gaulle or even under Mitterrand. That is why Front National ... occupies a very important place, and I welcome it, I will promote it and understand it very well. ” Earlier, Delon spoke out against same-sex marriage: “homosexuality is against nature”. In fact, this is a challenge. The French are tired to endure. It's time to look at the situation with sober eyes. There is still time to take a step from the abyss. The “National Front” is a chance for France to save itself.

Ctrl Enter
Noticed a mistake Highlight text and press. Ctrl + Enter
We are
Earthly forces, heavenly problemsMarine Le Pen - the future leader of France?
56 comments
Information
Dear reader, to leave comments on the publication, you must to register.