October 18 2013
89
MIG-25 - the last of the "Migov" dynasty, which was tested in the fighting in the Middle East. It was used on the "Egyptian front" during the Arab-Israeli war 1969 of the year as an intelligence officer, as well as on the "Syrian" one - with the appropriate equipment and weapons as an interceptor. 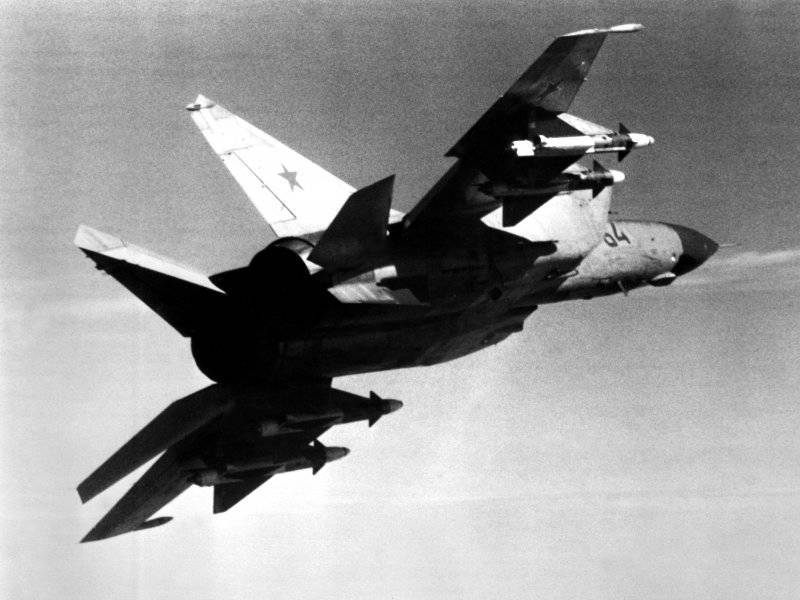 MIG-25 as a scout recalls a participant in the events - test pilot V. Gordienko.

MIG-25, he says, at that time was so superior to the existing fighters in the world that only the theoretical possibility of intercepting it remained. We were convinced of this by launching specific combat missions of aerial reconnaissance.

The plane successfully coped with all the tasks. The on-board electronic warfare equipment, which more than once saved our lives in seemingly desperate situations, also withstood the test. The weapons system of MIGs ensured effective work on both air and ground targets. And, if necessary, could allow the pilot to strike a bomb on objects or areas from a height of 20 thousand meters at a speed of 2.300 km / h. However, this and some other variants of combat use of the aircraft were not required by the situation.

According to Gordienko, Israeli pilots on the Phantoms tried to intercept them, usually from ambushes or from the “airborne alert” position. But in vain. Once, in the area of ​​the Suez Canal, dozens of fighter jets started hunting for our plane at once. A pilot caught up in the raid had to squeeze out of the MIG everything he could do to escape the chase. And it succeeded. By the way, in Egypt, our military pilots set several absolute altitude records. Unfortunately, there was no one to register them ... After the sudden death of Nasser, the new leadership of the country limited reconnaissance flights. And soon an ultimatum followed within 24 hours to withdraw the MiGs from Egypt. When everything was ready for the flight, the Egyptian left for the runway Tanks. They managed to settle the conflict through diplomatic means, and a day later the arriving Antei took away the equipment and people. So ended the first battle page in stories MIG-25.

To the story of a test pilot, it is advisable to make two additions. During the invasion of Israeli airspace MIG-25, gaining altitude more than 18.000 m over its territory, several times fired at the Hawk anti-aircraft missiles. However, all the gaps were recorded below the path of the flight of the scout. Nor could the paths of the MIG-25 high-altitude and absolutely fighter-bomber "Phantom" cross the paths.

A SECOND page in the MIG-25 combat biography opened eleven years on the eve of the Lebanese War 1982. In February, the X-NUMX, when new F-1981 fighter jets entered the Israeli army, materialized a number of practical options for luring Syrian MIG-15 into a tactical trap.

The demonstrative actions - provocations to the challenge - moved to the range of near-stratospheric heights (10.000-12.000 m). There are frequent cases of deliberate violation of Syria’s air borders from the sea.

The following is an extract from the log of hostilities:

"... 13 February 1981 of the year over Lebanon appeared a pair of Israeli intelligence officers RF-4C, which began to move along the lift line to intercept in a northerly direction with a speed of 1.000 km / h at an altitude of 12.000 m. Towards violators air came out a single MIG-25.

At 13.25, at the 8.000 echelon, MIG-25 began to accelerate, then took one for the purpose of altitude at a distance of 110 km. In response, the “target” turned back and left behind a dense cloud of dipole reflectors, which formed a spot of light on the guidance radar screen. MIG-25 continued the pursuit of the scouts departing to the south. A minute later, another “target” emerged from the “cloud” of interference (the altimeter gave the first notch on 3.000 m). It was the Israeli F-15, who had previously been in wait for a high mountain range.

In 13.27, the distance between F-15 and MIG-25 has been reduced to 50 km. The Syrian pilot (fully mastered MIG-25) could not detect the enemy approaching from below because of the restriction of the on-board radar in the lower hemisphere survey. The team, filed from the ground to the lapel, did not reach the pilot, because at that moment there was a strong noise interference on the radio.

In 13.28, on the opposite approach in the F-15 set from the 25 km distance, the missile was launched and shot down by the MIG-25. A large hole was found in the left plane of the plane in Lebanon and fragments of a rocket were found, on one of which it was possible to distinguish the inscription AIM-7F. ”

That is how the first rocket attack in the history of the air war took place. According to records, it was provided by reconnaissance aircraft, who undertook a planned demonstrative maneuver and dropped passive interference, as well as a specialized EW aircraft that was on duty over the sea with the HKVA and created noise interference that violated the control of MIG-25.

Thus, the sphere of battle was invaded by new elements that directly influenced its outcome. The content of the battle itself has also changed, which required a timely response. 29 July 1981, when the nine-year pause between the wars in the Middle East was still going on, the Israelis, in another provocation with violation of the border, changed the alignment of forces and order of actions. The demonstrative maneuvers were performed by a single F-15. The other two (strike group) located in ambush outside the zone of visibility of the Syrian ground radar.

The chief of staff of the Syrian Air Force (who later defended his doctoral dissertation) developed a response plan of action, which was implemented as follows.

The Upper F-15 began to call for a pair of MIG-21, and two MIG-25 aircraft went into an ambush - a darkened area in the review of the Israeli VKP "Hokai". F-15 "pecked" on a false call. On an oncoming course with him the point of guidance led one MIG-25 out of the pair. The second began a maneuver to strike at the flank.

However, F-15, without changing course, suddenly switched to decline, dragging MIG-25 with it. The Syrian pilot reported on target detection on 80 km, capture on 40 km and the subsequent disruption of the capture on a descent during the battle. Tags opponents on the radar screen guidance merged, and then disappeared. The pilot MIG-25 ejected, as he reported, “after the strike” and landed safely.

The second MIG-25 no longer hit the flank. The Israeli strike airplanes did not have time to get to the battlefield either. In an unforeseen situation in advance, quickly sorted out on the Syrian PCU. Considering the position more profitable, they decided to transfer MIG-25 to rapprochement. The pilot found the target on 40 km, captured on 25 km, launching the first rocket - on 18 km, second rocket - on 11 km (onboard controls in decoding confirmed the first rocket hit). Israeli pilot ejected over the sea. The patrol boats picked up a life jacket and a bag with signaling equipment stored in the ejection seat.

HOWEVER, the first effective battle of MIG-25 did not continue: the Syrian command took aircraft of this type beyond the scope of hostilities. The reason lay on the surface: in the stratosphere, where the characteristics of MIG-25 as an interceptor were revealed, no one flew (there were no “targets”). Undoubtedly, in those conditions to which the combat capabilities of the aircraft were driven, he had no equal. However, these “conditions” did not find a place in a limited armed conflict in the Middle East.

Ten years later, in 1991, the carriers of new military-technical ideas were confronted with the following fact: in the “high technology” war in the Persian Gulf, all modern combat “manned” aviation above 10.000 meters did not fly at all. The reconnaissance in the interests of the strike forces (including radio engineering with the establishment of the coordinates of the included air defense systems) was carried out by spacecraft. From duty zones in the air, shifted deep into their territory, they were helped by specialized aircraft that did not have weapons and personal protective equipment. Stratospheric interception - an expensive idea implemented in metal has not found its application in combat conditions.

The combat path of the MIGs of three generations - from the fifteenth to the twenty-fifth - is similar to the flight of a fighter with ups and downs. Success was present where the capabilities of the aircraft and weapons met the conditions of the tasks to be solved.

Ctrl Enter
Noticed oshЫbku Highlight text and press. Ctrl + Enter
We are
Red commanders on the Alley of MigCaptain A.V. Marievsky: German cars were against *** T-34
89 comments
Information
Dear reader, to leave comments on the publication, you must to register.