The present and future of the US nuclear forces

October 16 2013
17
In early October, the US State Department published information on the quantitative aspects of the strategic nuclear forces of Russia and the United States. Such information is published in accordance with the START-3 treaty and is intended to inform the general public about the progress of the reduction of nuclear weapons and their carriers. A close examination of the American nuclear potential in the light of the available information can draw some conclusions. Data in open sources say that in terms of its quantity, US nuclear weapons are ahead of Russian ones. In this case, there may be some problems in quality terms. Therefore, Washington has special programs designed to eliminate existing problems. 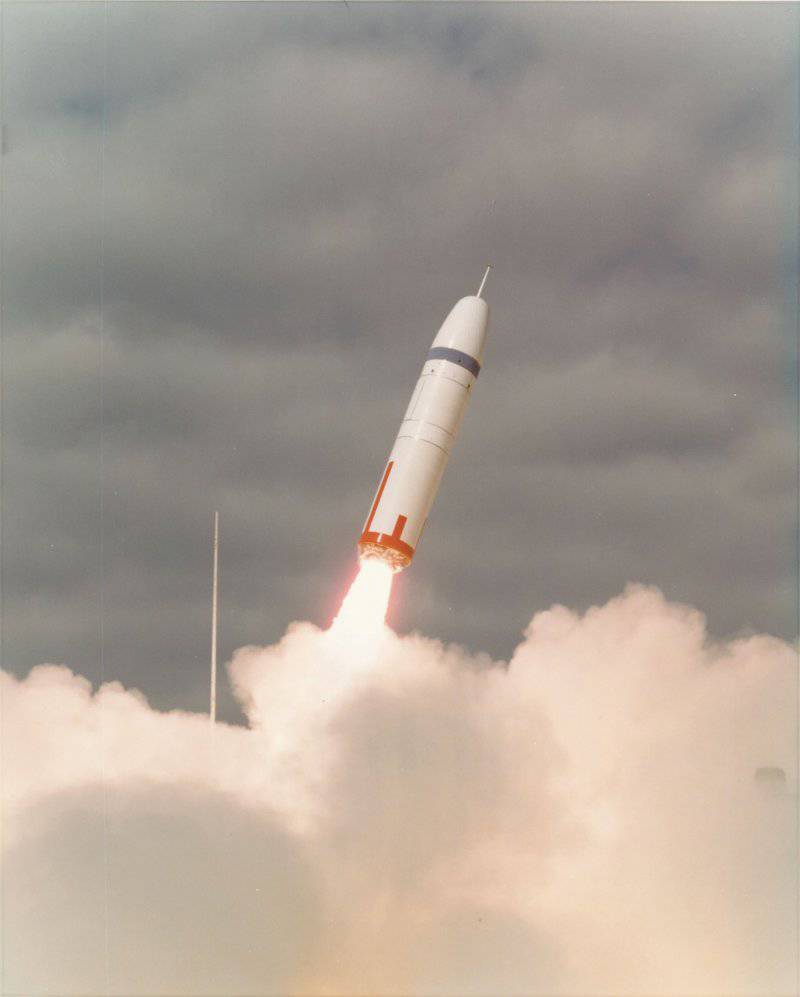 Trident I, the first launch of 18 January 1977 at Cape Canaveral

According to the State Department, 809 carriers of nuclear weapons from 1015 available. In combat condition are 1688 warheads. For comparison, in Russia there are 473 carriers on duty from 894 available, which carry 1400 warheads. In accordance with the effective START-3 agreement, by 2018, both countries should reduce their nuclear forces to the following indicators: 800 carriers of nuclear weapons should be in service, 700 of which can be deployed at one time, and the total number of nuclear warheads ready for use cannot be must exceed 1550 units.

As can be seen from the available information, over the coming years, the United States will have to write off and dispose of a sufficiently large number of nuclear charges, airplanes and missiles. Moreover, such a reduction should hit hard on the means of delivery: before 2018, the United States will be forced to decommission about 20% of existing carriers of nuclear weapons. Reducing the number of nuclear weapons, in turn, will go on a smaller scale.

In recent years, information on the actual state of US nuclear forces has regularly appeared. Different sources provide information in a way that is beneficial for them, criticizing or praising the situation. However, in some cases, the observed state of the US nuclear triad, at least, raises questions. According to available information, over the past 15-20 years, the United States has not produced a single nuclear warhead, which may have an impact on the capabilities of missiles and bombers, since such products may lose their qualities during long-term storage. It should also be remembered that after the collapse of the Soviet Union and the end of the Cold War, the US military and the designers did not pay enough attention to the development of new carriers of nuclear weapons. Moreover, the construction of the main US strategic bombers Boeing B-52 Stratofortress was completed half a century ago, and the newest Northrop Grumman B-2 Spirit aircraft were built with a series of 21 units (one aircraft was lost during operation). Thus, it is possible to draw conclusions about the need to re-equip the US nuclear forces.

It should be noted that the American leadership understood this long ago and, in 2001, launched the project on the reorganization of nuclear forces. According to the plans of that time, the nuclear triad became part of the new structure, which also included conventional weapons suitable for strategic tasks, appropriate communications and control equipment, etc. The main goal of such transformations was to ensure maximum flexibility in the use of strategic offensive forces. In other words, nuclear weapons were included in the system, the task of which is not only strategic deterrence, but also the solution of certain tasks in conflict situations.

At the time of the transformation, the strategic nuclear forces of the United States had a sufficiently large number of warheads and their carriers. In accordance with the START-1 agreement in force at that time, the United States was armed with 1238 carriers and almost 6000 nuclear charges. The current START-3 agreement has a much more rigid framework. Thus, the allowable number of deployed warheads is about four times less than that allowed by the START-1 agreement. In this regard, over the past 12 years, the American command had to decide how and by what component of the nuclear triad to reduce.

Taking advantage of its right to independently resolve quantitative and qualitative questions of the state of nuclear forces, the United States has already determined what its nuclear shield will look like by 2018. According to reports, the main delivery vehicle will remain ballistic missiles located in silo launchers. By the indicated deadline, the United States intends to leave on duty 400 products of the LGM-30G Minuteman-III model. 12 Ohio strategic submarines will carry 240 UGM-133A Trident-II missiles. It is supposed to reduce their ammunition from 24 missiles to 20. Finally, as part of aviation parts of the nuclear triad will remain 44 B-52H bombers and 16 B-2. As a result, 700 carriers will be deployed simultaneously.

Available information suggests that the United States is already ready to fulfill its obligations under the START-3 agreement, at least in relation to the number of nuclear warheads and their carriers. Regarding the strategy of application, the United States military leadership is currently preparing relevant documents and proposals. In the near future, US targets will remain to prevent the proliferation of nuclear weapons and terrorism with their use. In addition, by strengthening the deterrence system for potential adversaries, the United States intends to reduce the role of nuclear weapons in protecting the country. At the same time, it is required, reducing the number of delivery vehicles and warheads, to ensure the safe operation of existing systems.

Issues relating to the capabilities of equipment and weapons are supposed to be solved in several stages with the help of a number of new projects. So, at present, based on the existing nuclear bombs of the B61 family, a new B61-12 ammunition is being developed. The guided bomb will have adjustable power from 0,3 to 45 kt, due to the use of the existing warhead from the B61-4 bomb. Also in the new ammunition is supposed to apply some technical solutions from the project JDAM guided bomb. As a result, the United States will receive a new low-power nuclear weapon with high accuracy characteristics. The release of the B61-12 bombs will tentatively begin in 2019. 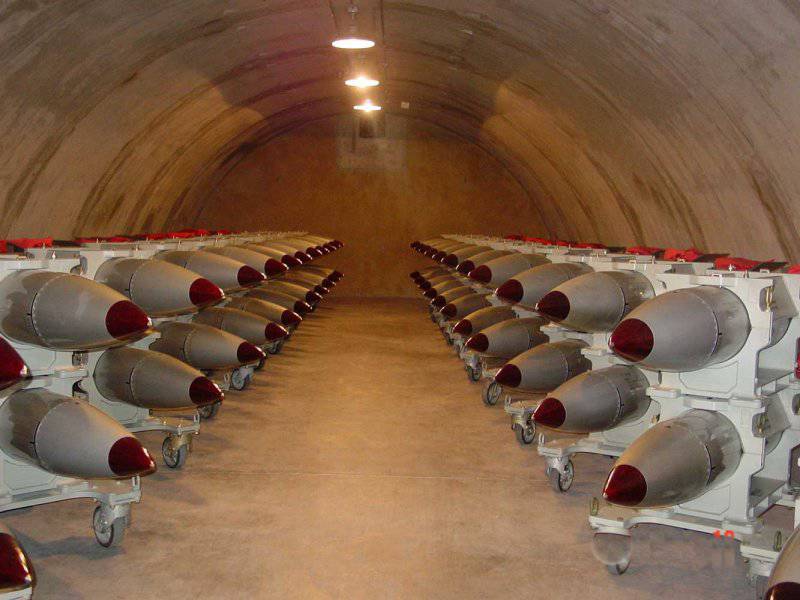 B61 family of nuclear bombs

In the future, the United States plans to extend the service life of combat units under the LEP program. At present, it is assumed that during the course of this project, six types of warheads will be upgraded, two for each component of the nuclear triad. No details on LEP are available. Probably one of the reasons for this is the fact that the main work on the project will be started only in the next decade.

US plans for promising nuclear weapons carriers are vague and not completely clear. At present, only a few of them can be talked about with confidence. For example, the existing B-52 and B-2 aircraft should be replaced by the NGB strategic bomber (Next-Generation Bomber - “Next-Generation Bomber”). It is expected that these aircraft will begin to arrive in parts of the US Air Force in the late twenties. The characteristics of a promising aircraft have not yet been named, as work continues to determine its appearance. This phase of the project should be completed in the coming years. From the previously published information, it follows that the NGB bomber will be similar in its characteristics to the B-2 currently used, but the developer is required to minimize the price of the finished machine. 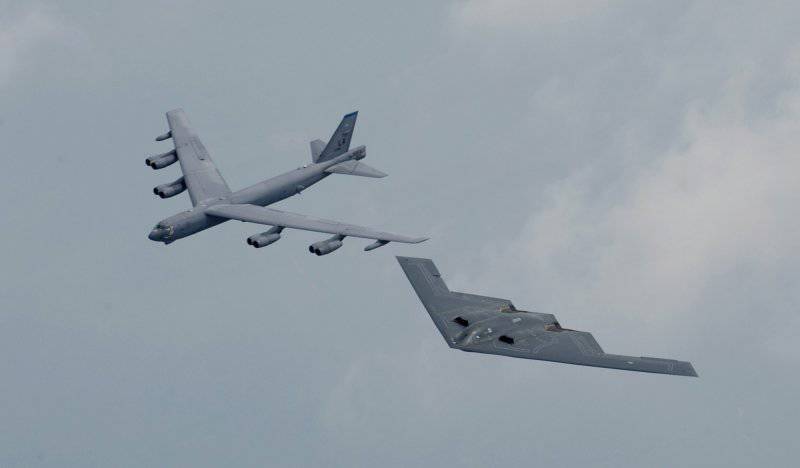 Boeing B-52 Stratofortress and B-2

At about the same time as the NGB bomber, a new long-range LRSO cruise missile should be added to the American Army. This ammunition should replace the AGM-86В ALCM and AGM-129А ACM missiles. Since last December, several companies have been developing their versions of the preliminary project. In the near future, the Pentagon will review the submitted projects and select a company that will receive a contract to create a full-fledged LRSO rocket project.

In the future, the naval component of the nuclear triad should receive new submarines built by the Ohio Replacement Submarine program. Previously, this project was designated as SSBN (X). The full-scale development of this project will begin in a few years, but for now, naval and shipbuilding specialists are working on the look of a promising submarine with ballistic missiles. It is assumed that each of the new boats will have characteristics at the level of existing Ohio-type submarines, but their operation will become cheaper. Ammunition of new submarines is planned to be reduced to 16 missiles. Information about the development of new American ballistic missiles for submarines is not available, from which it can be concluded about the arming of promising technology. At a minimum, during the first years of service, Ohio Replacement submarines will carry and use Trident-II missiles. 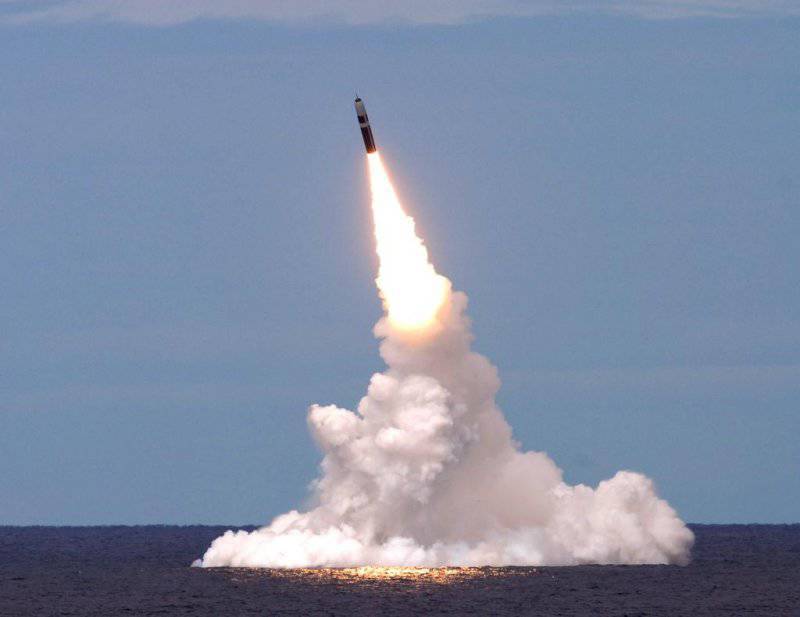 It is clear that the United States understands the consequences of the steps taken two decades ago and caused by the disappearance of the main enemy. On the whole, a satisfactory state of strategic nuclear forces remains to this day, but some of their features, primarily of a technical nature, do not allow making positive predictions even for the near future. Because of this, the United States needs to simultaneously address two issues. The first of these is associated with the re-equipment of the nuclear triad. To address this issue, new projects of airplanes, submarines and missiles of various purposes are being created, which in the future will have to replace existing equipment and weapons.

The second question facing the US command concerns the quantitative and, as a result, organizational features of the nuclear forces. Over the past 10-12 years, the United States has almost quadrupled the number of deployed nuclear weapons. Without any additional measures, such a reduction could adversely affect the capabilities of the American nuclear triad. In recent years, some steps have been taken to reorganize the strategic forces, which, allegedly, has helped to preserve their potential. In the future, based on the requirements of the SVN-3 agreement and possible new agreements of this kind, the United States will have to carry out regular reorganizations to meet the new requirements.

As we see, official Washington sees the existing problems and has a plan for solving them. It should be noted that some items of this plan will be carried out only in a few years, which is why, in general, everything looks like a comprehensive program designed for the near and distant future. How effective will be the planned program of action - time will tell.