In the migration box

October 16 2013
112
It is known that the population of Russia has been declining since the beginning of the 90s. In 1993, about 148,5 million people lived in the territory of Russia. After 10 years (in 2003 year), this figure was equal to 144,9 million inhabitants. And by the year 2009 has reached a minimum in the last 35 years - 141,9 million. Only in the period from 2010 to year, the current situation is somewhat corrected, and the specialists of statistical agencies record the increase in the permanent population of the Russian Federation.


At the same time, the contribution to population growth today is created not only by rising birth rates and declining mortality rates, but also the notorious migration rate, which many people in Russia today assess ambiguously.

To understand the structure of changes in the demographic situation in Russia, it is necessary to submit data from Rosstat.

How accurate and objective such data is is a separate issue, but without official data on demographics in Russia, it would be strange to argue on the fact of this question. So, Rosstat cites data according to which in our country for the first 8 months of 2013, 1,255 million were born, and 1,261 million people died.

The natural decline is about 6000 thousand people. However, Rosstat also cites data on how many migrants during the same period of time turned into permanent residents (citizens of Russia). Their number is more than 200 thousand people. Adding this number to the value of the natural population decline, we find that at this time stage, Russia's population growth was about 194 thousand people. These figures suggest that the ratio of births and deaths in Russia is in favor of the latter (although not as pronounced as, for example, 10-12 years ago), and that population growth is due to migration.

If you believe the sources of demographic information, then among the migrants who become Russians every year, more than three quarters of the newly made Russians are migrants from the countries of Central Asia, Transcaucasia, and a number of other former union republics (moreover, representatives of the indigenous peoples of Central Asia and Transcaucasia, and not those Russians who return on the historical Homeland). That is, out of four people who came to Russia for permanent residence and received a Russian passport, only one is Russian (or another representative of indigenous Russian peoples).

Such a tendency raises the new issue of migration in the country and often leads to a painful reaction of the indigenous population of Russia to the emergence of "new compatriots." For the time being, the situation is at the fermentation stage, but overnight it may take off. The last vivid example is Biryulyovo Zapadnoye, where local residents expressed their discontent with the fact that their area turned into a place of compact residence and turbulent activity of migrants, many of whom were not going and are not going to live according to Russian laws. And it’s not important for people what kind of passport the alleged murderer of a young Muscovite has, they are worried about something else - the fact that a failed migration policy today leads to the fact that the so-called ethnic crime in Russia is gaining more and more momentum, fueling the nationalist environment. At the same time, people demand that the authorities take measures against migrants, forcing the latter to live according to the laws of the country in which they are located. 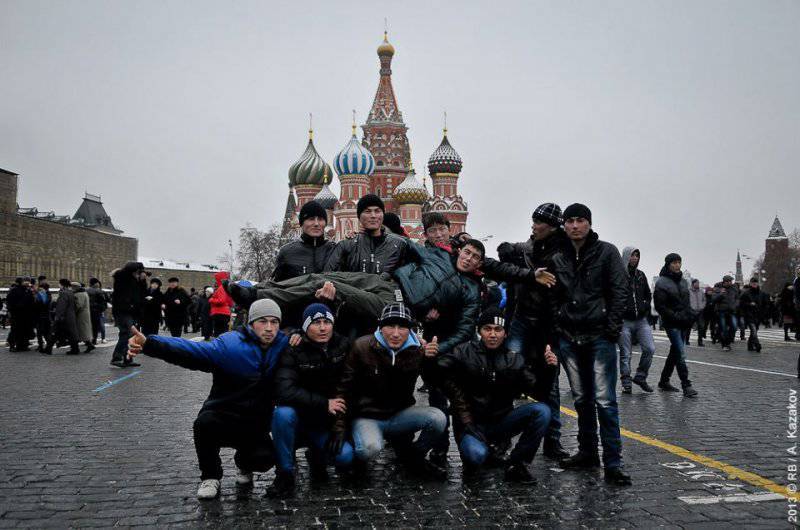 And what about the authorities? And the authorities were, as they often say in football, in a box. Even if one does not take into account (which is extremely difficult to do) the fact of the existence of corruption on a huge scale at different levels of government, the authorities, on the one hand, have a desire to present digestible demographics, occupancy rates, friendship with neighboring states, and on the other hand, promises (pre-election) that the migration issue in the country will be resolved in the most civilized, effective and within the law. It turns out that the controlling structures need the same positive demography at any cost - even if it’s a maniac, even if I'm sorry, the nits are done, but it will be a new Russian - it will add a percentage contribution to positive reporting.

How to get out of such a “box”? It would seem that everything is simple: to introduce a visa regime with the countries of the Transcaucasus and Central Asia, it is more difficult to approach the issue of issuing work permits to migrants in Russia, to clap hand in hand - and the matter is done. But in fact, to calculate today the consequences of this step is extremely difficult. One may ponder on the topic of patriotism in the cause of “settling all migrants,” but then the retaliatory move from the same Transcaucasus with Central Asia will not keep them waiting. Today we are actively reflecting on the fact that the Ukrainian leadership is trying to turn Ukraine towards the EU, are expressing dissatisfaction with this decision, are going to isolate Ukraine from Ukraine with new customs duties if it nevertheless goes on association with the European Union. So after all, the same attitude awaits Russia in the event that the Russian leadership starts to solve migration problems by introducing visas.

And even if it is assumed that Azerbaijan, Tajikistan, Uzbekistan and other states participating in the “active growth” of the Russian population on the basis of systematic “injections” of labor and other migrants, applaud the Russian leadership after introducing visas (of course, bredoversion), How much will the introduction of visas solve this problem? Now everything is arranged so that the borders between states exist only for law-abiding people, but those who, let's say, are frivolous about the execution of laws, will not be frightened by any border or visa. There will always be a “little man” who, for a certain number of bills (or out of friendship and kindness of mind), can provide a visa to “especially needy.” So the possible introduction of visas is only a step to temporarily calm the masses, but not a method for solving a complex task.

So, with visas - will not work. What then? Then, maybe, the real accountability of those who are not able to control migration flows is not able to control the receipt of Russian passports, work permits, medical books and other documents. But how to bring to justice those who make up the whole bureaucratic tangle, the thread from which leads to completely different spheres of influence ... Who will bring these “non-controllers” to justice, punish with rubles and terms? Police and courts? .. The legend is fresh ...

While it comes to mind, perhaps, the "people's assembly." But just for any such gathering, we are quickly labeled "gosdepovskoy camarilla", "alcoholics, drug addicts-nationalists" or "adherents of white ribbons" and other heresy. Simply by the bureaucratic corruption tangle, by the very fact of its existence, it means that they are not interested in their own unraveling and approach to the essence of the solution of the problem. Of course, it is much easier to accuse the same Biryulevka authorities of “drunken youth” or “nationalist-minded fans” in everything, trying to expose themselves to almost the injured party of the conflict than to do business.

In general, the migration policy in our country today is such that people who embody this policy are behaving as if they want to eat the fish and not to wash the plate for themselves - you see, our economy will “bend” without labor migrants demography without them is generally unintelligible, but we (those very persons) with regard to migrants will certainly be tough. We will, they say, but then. While it is necessary to be tougher with the indigenous population, and then, you see, they let go of here ... They don’t like it, you see, that the passports are to someone who hand you, that they work without a license, that they swing knives on the streets, that the governing bodies are inactive. And Alexander II managed the serfdom to abolish ...

Ctrl Enter
Noticed oshЫbku Highlight text and press. Ctrl + Enter
We are
The murder of Yegor Sviridov: Moscow entered the Manege (photo, video)
112 comments
Information
Dear reader, to leave comments on the publication, you must to register.