“The openness of the US government is a myth” 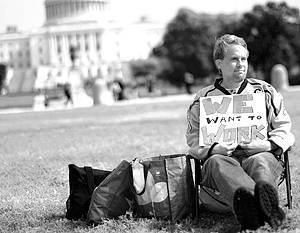 “The American intelligence community is more than 15 special services, in their number the US is the absolute leader with whom only the USSR could compare. American society, which promotes the values ​​of freedom, is under significant control of the special services, ”political analyst Alexei Pilko told LOOK TO the newspaper, commenting on the accusations of the International Committee to Protect Journalists against Washington.


The Chinese official agency Xinhua on Monday called the whole world to "de-Americanization." According to Chinese commentators, the fiscal crisis in the United States gives other countries a good chance to abandon American hegemony.

Meanwhile, the EU leadership on Monday warned that the US budget problems could have serious consequences for the world and European economies. “It becomes very important for the United States to solve its fiscal problems. Otherwise, this can have dramatic consequences for the global economy and, of course, have a negative impact on the emerging recovery of the European economy, ”said European Commission Deputy Olli Rehn.

Earlier, on Saturday, the head of the World Bank, Jim Yong Kim, recalled that the inability of politicians in Washington to reach an agreement on raising the "ceiling" of national debt could be the cause of a global economic catastrophe.

Alexey Pilko, an associate professor of the faculty of world politics at Moscow State University, told the VZGLYAD newspaper about whether the time of “de-Americanization” is really nearing in the world.

VIEW: Alexey Vasilyevich, the Chinese official press made an unusually pretentious statement - she called the whole world to “de-Americanization”. Are they serious? If so, is it not time for China to start with itself and withdraw its foreign exchange reserves from the United States?

Alexey Pilko: These appeals reflect the fear of the Chinese elite. The elite are worried that China may suffer serious economic damage in the event of any economic shocks in America.

I do not think that the United States will default. They have already approached this line several times. Most likely, the Republicans and Democrats will agree. The problem is that this internal instability and political fights are increasingly affecting the global economy. In China, it hits hardest because he is America’s largest creditor. Therefore, the situation, in particular, such as now, during a dispute over the budget, greatly irritates the Chinese. God forbid, something will happen to their more than a trillion dollars.

This appeal is a kind of element of pressure on the United States undertaken to stop their political clashes, causing instability.

VIEW: Before the default, theoretically, there are three days left. Even if they have time to agree at the last moment, can this behavior of American politicians be regarded as a sign of the weakness of the state?

A. P.: There is a small chance that a technical default will occur. The default is not beneficial to anyone - neither the United States itself, nor the rest of the powers. The problem is that within the framework of the current Bretton Woods system, which was formed under Roosevelt, the global financial system is American-centric.

It is clear that it can already be considered archaic and it’s time to look for something else, but at the time of the collapse it will crush not only the American economy, but also all the world's largest economies in general. The very “ideal storm” that some economists are talking about will begin.

So, most likely, the Americans in their own country will come to an agreement and at the last moment will “rebound” from default, otherwise they will get such problems that will cost them the status of the largest world economy, if not more.

VIEW: Due to the "shutdown" of the government in the United States, numerous donor programs have been suspended. Their activities are supported only by donations from charitable organizations. However, in some states, programs are suspended completely. How will such a refusal affect the confidence of ordinary Americans in their state?

A. P.: The situation was approximately the same under Bill Clinton. It is unlikely that this will particularly affect the life of American society, which has not yet been fully affected by this dispute. Let's see what will happen. I do not think that today it makes sense to talk about a serious undermining of the confidence of Americans in the state. It is too early to draw conclusions.

VIEW: How would you evaluate the findings of the report that the International Committee to Protect Journalists published at the end of last week? The report says that in America there is a tendency to call open coverage of government activities "espionage" ...

A. P.: In this respect, I do not see any novelty. The fact is that never in the United States was there such freedom as we used to think. Exactly the information that the American state considered necessary to communicate was released into public space. The openness of the American authorities is a myth. They were never what they wanted to appear to the outside world.

VIEW: But in relation to the United States such judgments rarely meet. More often in this reproaching the developing countries or Russia ...

A. P.: The whole American propaganda machine has been working since the war to create the image of the American state as “open and popular”. In fact, it was not. I would not exaggerate the level of openness of US government agencies even in comparison with some Western European countries.

VIEW: What do you think about the decision taken on Saturday in the US court, which allowed the NSA to continue to track calls from the Americans? According to Snowden, the NSA kept the metadata of millions of Internet users who were not suspected of any illegal activities ...

A. P.: The NSA monitored the calls of Americans, tracks them and will track them. This is a normal work, for which fulfillment including this body was created. The American intelligence community is more than 15 special services, in their number the US is the absolute leader with whom only the USSR could compare. American society, which promotes the values ​​of freedom, is under considerable control of the special services.

And the case of Snowden, which everyone now knows about, is rather an element of the American domestic political struggle. It was beneficial for someone to blow it all up, to make this analyst run. Intelligence agencies are created in order to obtain information - both about external factors and about its own citizens. This is an open secret.

Ctrl Enter
Noticed oshЫbku Highlight text and press. Ctrl + Enter
We are
The world we leave, the world we enter, and the world between themThe West without the USSR: the world goes to an ideological explosion
28 comments
Information
Dear reader, to leave comments on the publication, you must to register.