Russian troops will conduct exercises in the deserts of Rajasthan 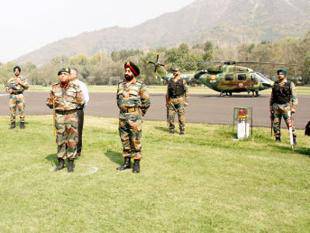 18-28 in October, the army units of India and Russia will hold Ex INDRA exercises in the deserts of Rajasthan as part of strengthening military cooperation, reports The Economic Times 13 in October.


“These exercises are being held as part of a planned series of Indian-Russian exercises with the participation of mechanized troops with live firing,” said Colonel SD, a spokesman for the Indian Ministry of Defense. Goswami (SD Goswami). The exercises will be held under the auspices of the South-West Command of the Indian Armed Forces.

The event was aimed at improving interaction between the armies of the two countries at the tactical level for conducting UN peacekeeping operations.

The Majayan training ground was created three years ago and is used for conducting joint exercises with armies of friendly countries such as Russia, the United States, the United Kingdom, France, Thailand and Kazakhstan.
Ctrl Enter
Noticed oshЫbku Highlight text and press. Ctrl + Enter
We are
"Army Games". Masters ABT. Part 1Su-30M arrived in Kazakhstan!
19 comments
Information
Dear reader, to leave comments on the publication, you must to register.