October 15 2013
2
During the Second World War, some warring countries actively used unmanaged aviation rockets. it weapon well established itself in the destruction of manpower, equipment and fortifications of the enemy. By the end of the war, all new aircraft destined for strikes against ground targets were initially armed with unguided rockets of various types. The main similar munitions of the US Air Force at the time of the end of the war was the HVAR (High Velocity Aircraft Rocket), also known as Holy Moses. 61-kilogram ammunition with a charge of about 3,5 kg of explosive allowed to effectively solve a number of tactical tasks. However, the HVAR rocket had some flaws that needed to be fixed. 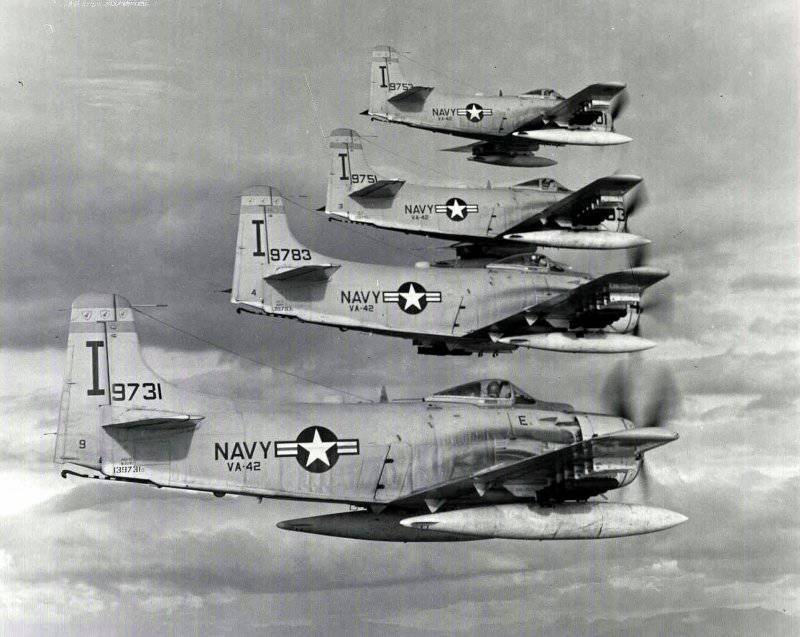 In 1946, the US Air Force adopted the Douglas AD Skyraider attack aircraft. This plane was created taking into account the experience of the Second World War and in fact absorbed all the best ideas of the American aircraft industry of that time. If necessary, Skyraider attack aircraft could carry and use unguided HVAR missiles. However, a large number of such ammunition on the external sling, under the wing, led to some unpleasant consequences. The missiles worsened the flow around the aircraft, because of which the drag was increased, and vibrations were observed at certain flight conditions. To get rid of these phenomena had to sacrifice ammunition and hang a smaller number of missiles.

The views of American strategists on the role of attack aircraft in a hypothetical war, the possibility of unguided HVAR missiles, as well as the ambiguous situation with the AD Skyraider's ammunition charge, led to the appearance of an original solution. It was proposed to create a new aviation weapon capable of combining all the best qualities of existing missiles and guns. The project called AERO X10A was unusual for the American and world arms industry, which may cause some problems with its classification. In the aviation weapons complex X10A, technical solutions borrowed from receiver and rocket artillery were simultaneously used. In this regard, in some sources AERO X10A is referred to as a recoilless weapon with an active-projectile projectile, and in others - a launcher of unguided rockets.

Douglas company specialists involved in the X10A project decided to bring together all the best features of the existing systems. To this end, it was suggested that the AD Skyraider aircraft be equipped with two guns / launchers placed in wing consoles. These units were smooth-bore systems caliber 127 mm with ammunition mechanisms. To reduce the huge impact of large-caliber shells of the original design, the AERO X10A gun was executed recoilless. The exhaust pipe was supposed to bring on the lower surface of the wing. Inside the wing was the breech of the original system, as well as mechanisms for the supply of ammunition.

Remembering the high power of the HVAR missile warhead, the designers of the Douglas company used it in new ammunition. The active-projectile projectile of the AERO X10A complex was the head of a basic unguided missile with a body attached to it. Inside the latter was placed a propellant charge, as well as a solid propellant sustainer engine. In some sources it is mentioned that the engine had one main and several additional nozzles. The latter at the same time gave the projectile rotation and were used to stabilize it in flight. 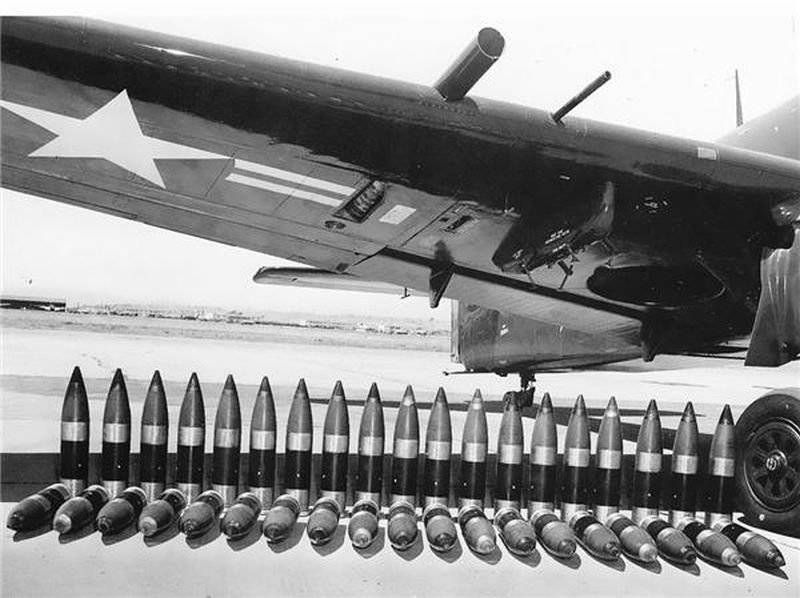 By the end of the 1946 of the year, a Skyraider with serial number 09094 was converted into a carrier of the advanced AERO X10A artillery system at one of the plants of the Douglas company. Two guns / launchers placed at the junction of the center section and wing consoles. Next to them were installed ammunition boxes with a system for feeding projectiles into the guns. An interesting fact is that when the aircraft was refitted, its weight and centering almost did not change. Each X10A system weighed only 73 kilograms. Another about 380 kg accounted for ammunition. The masses of guns / launchers with ammunition fully fit into the permissible weight of the payload, and the problem of alignment was solved by the correct placement of all components of the artillery complex.

The prototype aircraft received the designation XBT2B-D1 and went to the Naval Artillery Station in the city of Ainiokern (California). The very first firing of the aircraft, attached to a special restraint system, showed the high capabilities of the AERO X10A complex. Active-missiles had a fairly high accuracy, comparable to the unguided HVAR missiles. In addition, the size and weight of the new ammunition made it possible to place large ammunition in the wing - 19 shells for each gun / launcher. One X10A projectile weighed about 10 kilograms, i.e. was six times lighter than the HVAR missile, but had the same explosive charge.

One Douglas AD Skyraider aircraft equipped with the AERO X10A system could, in theory, perform such a combat mission, which required several attack aircraft with unguided HVAR missiles. It was expected that the rate of fire would have a positive effect on the combat qualities of the re-equipped aircraft: the X10A system fired at tests at a rate of up to three rounds per second. It is easy to calculate that all ammunition could be shot in 6-7 seconds, i.e. in one run. It remains only to guess what would be with the goal after such a strike only one aircraft.

However, the advantages of the AERO X10A artillery complex were leveled by only one drawback. In the small dimensions of the new 127-mm projectile could not manage to enter a sufficient propelling charge and a solid-fuel engine with the required characteristics. Because of this, the effective firing range of the new aviation artillery complex did not exceed 800-900 meters. For comparison, the HVAR rocket could hit targets at distances up to 4-5 km (excluding dispersion, etc., of the features of firing unmanaged ammunition). Because of this, in the event of a hypothetical war, attackers with X10A guns / launchers would have to approach the target for a dangerous distance and risk falling under the fire of small-caliber anti-aircraft artillery. The second complaint of the military related to the composition of the weapons of the prototype aircraft XBT2B-D1. To install recoilless guns, automatic X-gun caliber 20 mm was removed from it. Probably, further serial attack aircraft with the AERO X10A complex also risked losing automatic guns, and with them a considerable part of firepower.

Employees of Douglas, seeing the benefits of the new artillery system, continued its improvement. Trimming and testing of the revised versions of the gun / launcher continued, with varying success, until the 1950 year. Accurate information about the essence of improvements at a particular stage of the project is missing. Perhaps the authors of the project managed to get rid of some technical and technological problems, but the result was predetermined. The design of the active-projectile did not allow to increase the firing range to acceptable values, since it was impossible to fit a more powerful solid-propellant engine or a propelling charge into the housing of the available size.

It is not known whether the HBT2B-D1 aircraft flew into the air and fired while flying. The last mention of this prototype attack aircraft with the original artillery system refers to the 1950 year. After several years of unsuccessful improvements, the customer in the person of the American military department refused financial and administrative support for the AERO X10A project. For four years, Douglas has not been able to rid its design of the major flaws that caused claims from the military. Due to the absence of any noticeable progress, the project was closed as unpromising. In the future, attempts to create an artillery system of such an architecture were not undertaken. The emergence of new technologies in the fields of aircraft manufacturing, weapons and engine building has allowed us to return to the usual weapons: automatic small-caliber guns and unguided rockets, which are still used today.

Ctrl Enter
Noticed oshЫbku Highlight text and press. Ctrl + Enter
We are
An-12 in AfghanistanIn pursuit of power, the Skyraider prototype with active-jet projectiles AERO X10A.
2 comments
Information
Dear reader, to leave comments on the publication, you must to register.