What a strange tantrum around the Olympic torch relay?

October 15 2013
186
The Olympic flame continues on the territory of Russia. The journey, during which the fire should visit all Russian regions: from Kaliningrad to Sakhalin, go to the bottom of Baikal, to the top of Elbrus and even into outer space. The plans of the organizers of the Olympic torch relay are more than impressive. However, today in most media, especially in the Internet environment, the blogosphere, it has become customary to discuss not the proximity of international sporting events, and not even the course of preparation for this action (despite all the problems with embezzlement and corruption during the Olympic construction), but completely different subjects. - those that can be quickly and effectively demonstrated to millions of ordinary people. 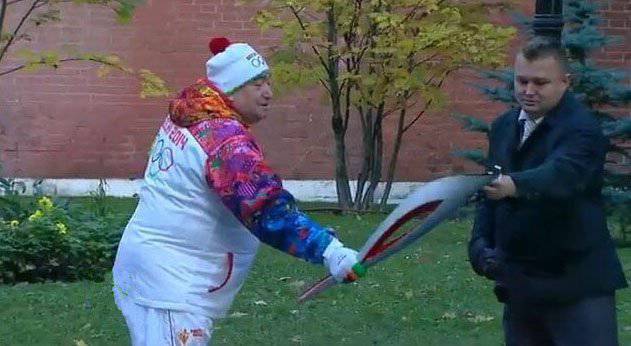 The world champion in scuba diving and the hero who saved 1976 in 20 from a bus that fell into the lake Shavarsh Karapetyan told Pravde.Ru about what happened with the Olympic flame and why the incident should not have attracted so much attention.

The incident with the Olympic flame attracted unprecedented attention, though not from the IOC or athletes, but from peculiarly minded citizens who saw in the incident a bad omen and the collapse of the Games in Sochi. Shavarsh Karapetyan, a multiple world and European champion, a man who was entrusted with the honor of starting the Olympic torch relay, said that he himself was surprised at the incredible hype.

"Many places like this happened, but there was no such noise," he told Pravda.Ru. "During the relay, there are special people who, if anything, will light the torch again. Here and there, they first lit it with a lighter, but then extinguished it and set it on fire again, but already from the Olympic flame, which was in special lamps. and did not get into the camera lens, which is insulting. It should have been shown first of all - the fire continued on its way and it caught fire not from a lighter.

The fire went out because I ran under the arch, and there was wind. That's all. "According to Karapetyan, in what happened to the fire, he does not see any bad omens." I am not superstitious, and the fact that the fire has gone out cannot be a reason to think about failures, failures or something else. At competitions, including the Olympic Games, there is anything - false starts for athletes, for example. I myself fell, hit, but I never perceived such things as a bad omen. "

Shavarsh Karapetyan: There is no bad omen that the Olympic flame went out

We are talking about how several times during the torch relay the Olympic fire managed to go out. It was these incidents that became the subject of spraying saliva from a certain number of citizens and not only citizens: they say, the torches, on the creation of which millions of rubles were spent, go out, and this means that the Russian team, and the whole country, expect the “epic failure” "- a complete fiasco. And then there was the fire, which the representative of the Kremlin security service helped to ignite with the help of a lighter. At the same time, people who bungled from “lighter” fire kisses history about the fact that the real Olympic flame will not reach Sochi, for some reason they pass by the fact: at the end of the next day of the route, the torch, if it was extinguished for some reason or another, was extinguished, it is ignited by the burner, which was brought by plane from Greece. It is not for nothing that several of these burners "grabbed" ... So, something, and the Olympic flame will reach Sochi ...

There have even been communities in social networks that propose to follow the Olympic torch relay and discuss with great admiration how the cities in the route of the fire were extinguished in the hands of one or another participant of this relay race. Look, look - go out! went out! Hooray! All right, we are discussing who is to blame: Miller “diluted”? Shoigu not watched? Putin has a good “blue” fuel in the “blue” European Union, and for the Olympics, one “Ge” leaves ... In general, people manifest some kind of mania - count the number of “extinctions” and make a sensation out of it - replicate, replicate and replicate . Well, firstly, it means that such people have enough free time, and secondly ...

Secondly, people who revel in the "happiness" of the realization that the torch had gone out somewhere and that it had been rekindled again are clearly not familiar with the history of the Olympic torch relay, as well as with the history of the "Olympic Flame" after how it was delivered and lit at the Olympic stadiums. If a certain circle of people with such a story is not familiar, then it is worth presenting facts from different years telling that the Olympic flame is more than capricious, and that making some kind of sensation from the fact of its periodic extinction is at least strange ...

2004 year. Torch Relay Athens Olympics. The fire went out (oh, horror for the hyperliberal public) immediately after it was lit in the temple of Hera in Olympia. Even the chairman of the Greek Olympic Organizing Committee, Angelopoulou-Daskalaki, did not manage to take the torch. And after all, what is remarkable, no one in Greece spoke in the spirit: they say, hands grow or not from that place at this Angelopoulou, or Zeus himself hints at the imminent economic problems of Greece ... In Greece, to those to whom Zeus is still hinting, the attitude is not as loyal as ours.

Then the fire went out a few more times during the actual relay.

2008 year. Torch Relay Beijing Olympics. As a result of attacks on torchbearers, the fire subsided, after which it had to be lit again. The cause of the attacks was “abuses of the rights and freedoms of the people of Tibet”. After another attack, the Chinese organizers themselves put out the fire, and decided to take it on the bus, since there are too many riotous things (it was in France) ...

2012 year. The torch relay of the London Olympics. The fire faded at least three dozen times. At the same time, in most cases it was blown out by the wind (as the organizers said later) while running the participants of the relay, several times it was put out by torrential rain. The torch was flooded with the waters of the river, on which canoeists decided to conduct it.

1976 year. The relay of the Montreal Olympics fire. The fire during the relay behaved, as they say, with dignity, and “put a pig” already during the Olympics, having decided to go out right in the bowl. Shower just poured the bowl along with the fire. If all suspicious people had the opportunity to publish their thoughts for thousands of readers at that time, then it would be terrible to assume that the world would hear: perhaps, from the ideas of approaching a comet killer to Montreal to predictions about the complete extinction of the inhabitants of the country of the maple leaf ...

There were situations and not only with the attenuation of the Olympic flame.

1988 year. The opening of the Olympic Games in Seoul. The pigeons, which were released into the sky after the bowl was ignited, circled a little in the air and sat on the edge of this very bowl. They burned in it ... After that, with the birds around the fire they did not risk it.

2010 year. The opening ceremony of the Olympics in Vancouver. During the ignition of fire in the "bowl", which in the Vancouver case symbolized a huge bonfire, a failure occurred, and one of the supports of the "bonfire" did not come out of the special box. As a result, one of the “instigators” (there were four of them in Vancouver) did not receive the opportunity to ignite the fire of the Olympics during the opening.

Gus fire during the baton of most other Olympics. Only an unhealthy sensation from this did not. And then they made a whole tantrum.

On eternal fires we have renegades, barbecues can fry or arrange a dance floor, or even urinate on it (on fire) - for some reason the hyperliberal public doesn’t want to talk out loud, as well as it’s not acceptable to their representatives wants - not the one, you know, the effect ... But from the attenuation of the Olympic flame during the relay, something she (this public) both itches and itches.

Ctrl Enter
Noticed oshЫbku Highlight text and press. Ctrl + Enter
We are
Olympic torch relay in the Baikal region
186 comments
Information
Dear reader, to leave comments on the publication, you must to register.