The Rubezh missile system in the light of international treaties

October 15 2013
74
In the early days of October, several Newsdirectly related to Russian strategic nuclear forces. On October 1, the US State Department published the latest data on the quantitative indicators of nuclear weapons in Russia and the United States. A little later, information regarding some aspects of testing missiles by our country got into the public domain. In addition, both news of early October are most directly related to earlier events that have occurred in recent times. 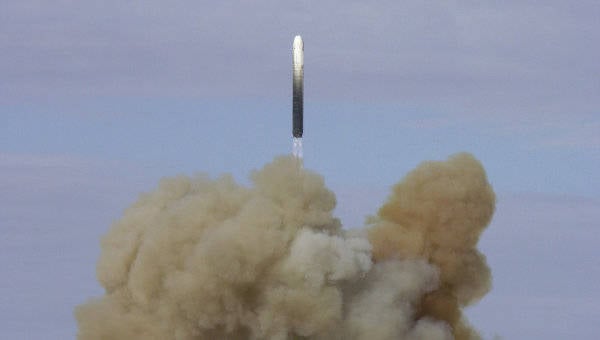 As of September 1, according to the US State Department, the strategic nuclear forces of Russia have 473 deployed carriers of atomic weapons. The total number of unwrapped and unwrapped media equals 894 units. Deployed carriers can deliver warheads to 1400 targets. In the United States, 809 media from 1015 is currently deployed. The rockets and bombers deployed and ready for combat carry a total of 1688 warheads. In accordance with the START-3 agreement, Russia and the United States must bring the number of carriers and nuclear warheads to the following quantities. The total number of carriers in each country should not exceed 800 units. 700 of them can be simultaneously deployed and equipped with 1550 warheads.

Considering the published data, it is easy to notice one interesting feature of the ongoing implementation of the conditions of the START-3 agreement. After previous cuts in strategic nuclear forces, as well as after the specific situation of the past years, the US is ahead of Russia in all three points: in the number of carriers, including deployed, and in the number of deployed warheads. Moreover, Russian strategic nuclear forces do not fit into the terms of the agreement for just one point - the total number of carriers exceeds the allowed. At the same time, the number of deployed carriers and warheads does not reach the prescribed values. This is especially pronounced in the case of unwrapped media, the actual number of which (473 units) is significantly less than the allowed 700.

This discrepancy in numbers suggests that over the coming years, Russia may not only not reduce the number of deployed carriers and nuclear warheads, but also increase it, remaining within the framework of START-3 conditions. The simplest way to strengthen nuclear forces is to increase the number of aircraft, missiles and submarine rocket carriers on duty. Indeed, subject to the availability of a certain stock of missiles in warehouses, this will improve the quantitative indicators of the country's nuclear shield. At the same time, the field of nuclear weapons and their means of delivery has a number of characteristic features. Therefore, the available opportunities are better used to improve both quantitative and qualitative aspects.

The difference between the required and actual quantitative indicators can be filled by developing and building new carriers and warheads. Probably, the military and political leadership of Russia intends to develop nuclear forces in this way. In early October, a number of Russian media circulated information about the new contract of the Ministry of Defense. As reported, the insurance company Ingosstrakh won the tender of the military for insurance of several launches of strategic missiles. In addition, a list of types of missiles, the launches of which will be insured, was made public. Among the indices and designations already familiar to the general public, there was no previously encountered official sources. According to media reports, Ingosstrakh will insure the launch (or launches) of the RS-26 rocket. This designation was first published by The Washington Free Beacon in March of this year. Then, with reference to sources in American intelligence, it was asserted that Russia was developing some kind of medium-range missile RS-26, which could contradict the existing international agreement.

In early summer, the Russian military and defense industries confirmed the existence of a new ballistic missile project. At the same time, according to official information, the Rubezh project involves the creation of a complex with an intercontinental ballistic missile. Because of this, the new project does not contradict the treaty between the United States and Russia, which prohibits the development and operation of medium and short-range missiles. The available information about the tests of the Rubezh complex, as well as about other aspects of the domestic nuclear program, allow us to draw some conclusions. First of all, there is no longer any doubt that the PC-26 index is an alternative designation of a rocket, known as the Frontier.

After adopting the RS-24 Yars complex, the Rubezh PC-26 system became a new project of the domestic defense industry in the field of missile weapons, attracting increased attention of specialists and the public. The rocket, developed by the Moscow Institute of Thermal Engineering, is currently being tested. Over the past two years, four test launches were conducted, one of which ended in an accident. In the early summer of the current year, shortly after the fourth test launch, it was claimed that another rocket would be launched before the end of the year. Probably, this launch was insured, according to the press, on 180 million rubles.

The tests of the PC-26 “Frontier” missile have not yet been completed, but the plans of the military department are already known. Soon after the end of the tests of the new missile complex, the Ministry of Defense intends to adopt it. Next year it is planned to deploy the first regiment of the Strategic Missile Forces, armed with new missiles. Thus, over the coming months, the Russian strategic nuclear forces will receive a new delivery system with new warheads. Some sources claim that the PC-26 rocket carries a separable warhead with maneuvering warheads of individual guidance. For obvious reasons, we cannot yet speak about the veracity of this information. In any case, some other information about the Frontier project may contradict the version of the existence of a split head part of the rocket.

The adoption of the PC-26 missile and the start of its mass production will make it possible to quickly eliminate the lag in the number of deployed carriers and warheads. In addition, the new missile system will increase the combat potential of the Strategic Missile Forces, which should have a positive impact on the state of all strategic nuclear forces of Russia. As a result, it will be possible to bring the quantitative indicators of nuclear weapons and delivery vehicles to the maximum level corresponding to the terms of the START-3 agreement, as well as to raise the qualitative aspects by using the higher characteristics of the new weapons. The existing Russian-American agreement requires that the number of delivery vehicles and warheads be brought to the required value by 2018. By this time, we should expect the construction and transfer to the missile forces of a large number of RS-26 complexes.

Ctrl Enter
Noticed oshЫbku Highlight text and press. Ctrl + Enter
We are
Missile attack on Europe: myth or reality?Strategic nuclear forces: state and prospects
74 comments
Information
Dear reader, to leave comments on the publication, you must to register.