Egypt: between Russia and America

October 15 2013
48
Kathleen McFarland, national security analyst at Fox News, believes that Egypt is slipping from the United States. Moreover, floating away from Washington, he goes into the hands in Moscow. Putin has no time to lose: he is already building bridges with the new government in Cairo. As a result of Egypt’s withdrawal from the US orbit, the United States will lose its influence in the Middle East. This is what worries the expert. 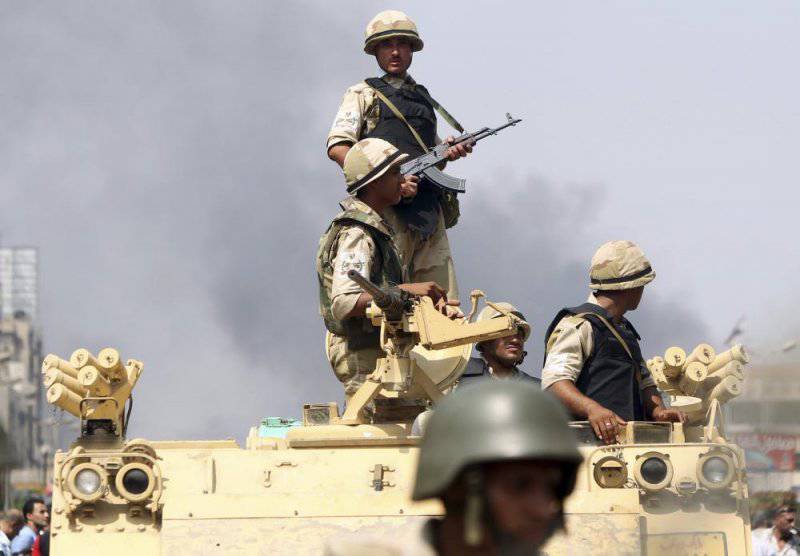 In the article “We must not allow the return of Egypt to the orbit of Russia”, published on foxnews.com (translation source - Mixednews.ru) Kathleen McFarland recalls that forty years ago, Arabs and Israelis fought against each other, and the 1973 war of the year led to an Arab oil embargo against the US, raising the price of oil and provoking a collapse on the stock market.

But every cloud has a silver lining. The war gave the United States the opportunity to establish peace between the Israeli and Arab states. Diplomacy has led to the establishment of new relations between the United States and Egypt. Egypt and Israel laid down weapon. Then these states received generous military and economic assistance from America. Egypt was eliminated from the war, and the rest of the Arab countries could not fight against Israel. The result for the United States became political dividends: Washington replaced Moscow as the main patron of Egypt, the journalist writes.

But today there is a threat that Egypt will change its orbit from the American to the Russian. The analyst writes:

“During my meeting with al-Sisi last week in Egypt, the general told me that America’s military assistance is not so important for them as its political support. According to al-Sisi, "it will not bring a penny, but will be decisive for establishing stability in Egypt."

If America refuses to support Egypt, the place of America will be taken by Russia, the journalist is sure. She notes that President Putin sent delegations to Egypt offering military assistance, cyber technologies and advanced weapons, not to mention friendship.

As soon as Egypt escapes from America, peace in the region will be broken, an Islamist uprising may happen, Washington will lose its position in the Middle East, Egypt’s fragile peace with Israel will be broken, etc., etc. Fox News analyst on national security issues indicates a devastating effect.

Where does the alarm come from? And the fact is that Washington itself pushes Cairo from its orbit. One hand pushes, the other picks up - something like this can be described as Obama’s current policy.

"BBC" reports that the US Department of State has begun revising the policy of assistance to Egypt in August this year. The Obama administration is unhappy that the president of the ARE was removed from power in an undemocratic manner. Bottom line: on Wednesday last week, the White House suspended the supply of Apache combat helicopters, spare parts for tanks and harpoon anti-ship cruise missiles.

It is also reported that the US will continue to help Egypt in the field of health and education, as well as financial support for security measures in the Sinai Peninsula.

What does Washington require from Cairo?

To return the favor of the White House, Egypt will have to prove its commitment to respect for democratic principles and human rights. Such a statement was made by the press service of the US Department of State, reports "Euronews".

White House spokesman Jay Carney said: “We cannot continue trade relations as before. And as you know, we have already announced the suspension of deliveries of certain military systems. ”

Washington called on the transitional authorities of Egypt to achieve "progress towards a democratically elected government through fair and free elections."

Meanwhile, analysts believe, the temporary cessation of US military assistance from the United States will have a slight effect on Egypt. Washington’s decision should be viewed only as a symbolic condemnation. He writes about it RBC with reference to the Associated Press.

Egypt has enough tanks and aircraft, they are enough to conduct a full-scale war. The decision of the Obama administration is a warning that the US will no longer do business with Egypt in the usual way.

Another question is how Obama’s decision will affect the United States itself.

"Voice of America" notes that Deputy State Department Press Secretary Marie Harf called the White House’s measure “detention” of aid. The main thing here is this: the money allocated in the state budget for Egypt is unlikely to return to the treasury. Some of them, according to M. Harf, can be used within the framework of other Egyptian programs, and some will have to be paid to American manufacturers of military equipment who cannot complete the deal for supplying Apache to Egypt, as well as F-16 fighters, M1 tanks , rockets.

“In some cases, the delay of some programs costs money,” said Harf. - For example, if you have to store somewhere equipment - the actual cost depends on the conditions of specific manufacturers under the contract. Of course, we will fully cover our obligations towards US contractors, where these programs conflict with our political objectives. We will evaluate each contract individually. ”

Specific figures were not named.

Harf also noted the strategic interest of the United States in maintaining ties with Egypt: “This money can go to other programs of assistance to the Egyptian people. Maintaining strong ties with the Egyptian government is a strategic interest - and it would be wrong to say that due to the fact that we are postponing the supply of large-scale military equipment, that relations between the armies of the two countries will seriously suffer from this. ”

If they return to the anxieties of Mrs. McFarland, then the proverb is just right: "A holy place is never empty." No matter what they say in America about the "temporary" suspension, "arrest" of aid and the "symbolic" act of the White House in relation to Cairo, the Egyptians are already interested in the Kremlin proposals.

According to the Egyptian liberal writer and political thinker, Professor Tariq Heggy, Egypt needs the help of Russia and the restoration of military cooperation with it. The opinion of the professor told the public. RIA News" Denis Voroshilov.

“Egypt needs to restore and strengthen military ties with Russia. We need to get rid of dependence on the American military industry. Our country needs to establish partnerships with the Russian Federation and China in order to be closer to them and to countries such as India and Japan, "said Heggy in an interview with RIA"News».

The professor added: “And Russia and China are at the head of this list. We have much to do in strengthening the relationship. "

Tariq Heggy further stated that one of Anwar Sadat’s greatest mistakes in the 1970-1981 years was that he relied entirely on America.

The expert also noted that fifteen percent of the Egyptian population are Christians:

“... The Egyptians hope that they finally got rid of this Islamist nightmare. The Muslim Brotherhood is the real enemy of the Egyptian people. And do not forget that almost 15% of Egyptian citizens are Christians, including Orthodox. The recent times of Islamist rule were comparable to the Holocaust for them. ”

Moreover, the professor is sure: the situation in Egypt was modeled by the United States. It was Washington that played a role in the formation of the so-called "political Islam":

“The Americans were one of the creators of political Islam, they flirted with him in many parts of the world until they finally believed in him. They wanted the Muslim Brotherhood to rule Egypt, but 33 million Egyptians took to the streets and said they did not want to be ruled by a religious government. ”

As for Islamist Mursi, he is. according to the expert, came to power with the help of the United States. America planned to bring the Islamists to power in other countries. The failure of the "Brothers" in Egypt professor considers "a great defeat" of America.

Thus, the “Egyptian” situation turned out to be one of those that pour oil on the fire of the American crisis. Obama seems to fall from his hands. Coup in Egypt - or not a coup? Obama with the "classification" is in no hurry: after all, it is impossible to send military aid to the coup. However, democracy has become bad there: the president was overthrown and kept under arrest. Recently, the arrest was extended for thirty days. So you need to do something. Did - announced interim measures to stop assistance. To whom is this primarily bad? Washington itself: the budget is already crisis-free, it is about to be defaulted, and here military companies must be paid — in fact, for delays and losses. Meanwhile, analysts in the US are afraid that Egypt will go into the sphere of influence of Russia. Washington cannot stop helping Cairo at all: after all, its own defense contractors will suffer, and even losing the AER from the orbit of influence is a geopolitically losing strategy. Vicious circle.

As always, Obama does not know what to do. Neither fish nor fowl. His half-hearted decision is well understood in Cairo. It does not scare anyone there.

It is also useful to recall that Egypt provides the United States with transit services through the Suez Canal, which, if need be, can allow the Americans to carry out a quick redeployment of military forces. And Egypt also provides America with its airspace for the same strategic goals.

Observed and commented on Oleg Chuvakin
- especially for topwar.ru
Ctrl Enter
Noticed oshЫbku Highlight text and press. Ctrl + Enter
We are
Ban flights to Egypt. What happened to the plane and what awaits the Russian tourist business?Putin's "Star Hour"
48 comments
Information
Dear reader, to leave comments on the publication, you must to register.