October 14 2013
29
IT-1 "Dragon" (Fighter tanks, aka “Object 150”) is a Soviet missile tank, which was put into service in 1968 and was mass-produced at Uralvagonzavod. IT-1 is the first and only fully adopted missile tank in the world, that is, guided missiles were its main weapons. This tank destroyer was built on the basis of components and assemblies of the experimental medium tank Object 140. In the future, this tank was not mass-produced, but the solutions obtained during its development were widely used to create the Object 165 tank, better known as T-62A. IT-1 was put into service in 1968 and withdrawn from service already in 1970, L. N. Kartsev was the chief designer of the machine.


Serial production of tank destroyers was carried out from 1968 to 1970 a year, 110 production vehicles were manufactured in total. The body of the tank is welded from rolled armor plates. The turret was cast, in the turret there was a retractable launcher of an ATGM equipped with an automatic loader. IT 1 was equipped with day and night sights, as well as stabilizer targeting anti-tank missiles. The tower was equipped with electric and manual turning mechanisms. Shooting with rockets having a radio command guidance system on the target was carried out in motion and from a spot to a distance from 300 to 3300 meters in the daytime and to the distance to 1000-1500 meters at night (minimum range 400-600 meters).

The layout of the fighter tank IT 1 "Dragon"

IT-1 "Dragon" was a military tracked vehicle with missile weapons, high maneuverability and reliable armor. The layout of the combat vehicle is classic. The crew consisted of 3-x people: driver, gunner operator and commander. In front of the IT-1's hull, there was a control compartment; on the right side of the driver's seat were 3 fuel tanks. The average fuel tank, like on the T-62 tank, was not mounted. Above the driver's seat in the hull roof there was a hatch equipped with a swivel armor cover. Behind his seat was located the emergency exit hatch and tool box. 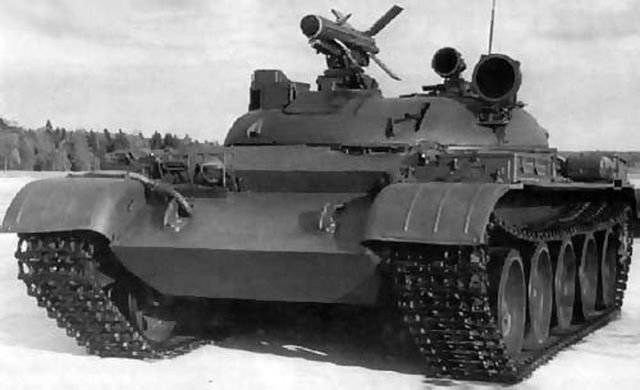 The fighting compartment of the Dragon missile tank was located in the middle of the hull and its turret. The equipment and layout was fundamentally different from the crew compartment on the T-62 tank. Inside it was an FFP - a loading and launching system, which consisted of a launcher and a loading mechanism (a mechanized rack with tank guided missiles - TURS). To the right in the bash was the place of the gunner-operator, to the left - on the frame of the loading mechanism - the seat of the vehicle commander.

Before the seat of the commander of the machine were located: the alignment unit of the sight, the power unit of the projectile, the distribution box. In front of the left of this seat was a PKT machine gun, as well as cylinders of the protective glass cleaning system of the input windows of the sights. To the left of the tank commander, the radio station P-123 was installed, and above it, the TPU apparatus, a tank intercom. Before the gunner-operator, a day-sight was installed, to the right of it - a night one, an encoder and units for the command generation device, an 3 dissector unit for the coordinate picker and a gunner-operator console.

In the roof of the tower on the left side there was a commander's turret with a hatch, it was equipped with a commander target designation system, 4-II prism surveillance devices, as well as a combined day and night observation device TKN-3, over which the OU-ZKG illuminator was mounted. On the right side was the hatch of the gunner-operator, in front of which was also installed one prism observation device. Between these two hatches there was a hatch for issuing PU. Also on the tower on its left side there was an illuminator L-2G of the night sight, as well as a F-125 headlight. 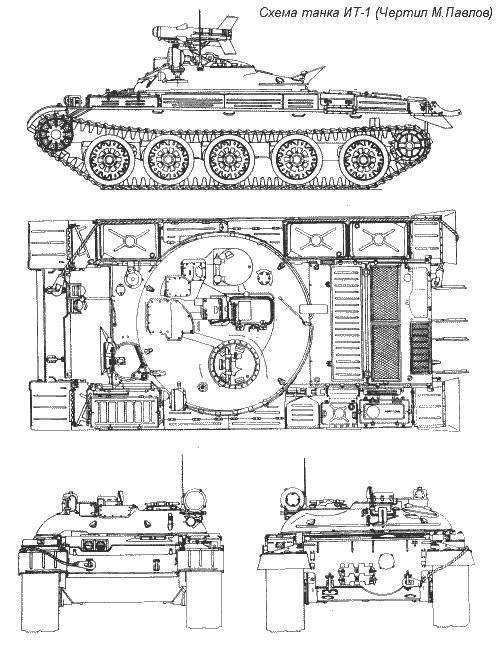 The engine compartment (MTO) was located in the rear of the hull and was separated from the fighting compartment of the vehicle by a special sealed partition. MTO had: the engine, as well as the systems servicing it, the cooling system fan, transmission units with control drives, built-in fire fighting equipment. Across the tank hull, a diesel engine B-55А was installed in the MTO, which has horsepower 580. It was a modification of the tank diesel engine B-55, but without a generator. The G-10 generator was installed not on the engine itself, but separately from it.

The armor protection of a tank destroyer is a differentiated anti-projectile. The hull of the tank was made of armor plates with a thickness from 20 to 100-mm (hull forehead), which were installed with rational tilt angles, and slightly different from the booking of the hull of the T-62. The hull sides are vertical armor plates (80-mm). Aft hull included 2 armor plate. In order to protect the shoulder strap from direct bullet hits, special armor strips were welded to the hull. A low-profile tower, which was a steel shaped casting, was mounted on a ball-support IT 1 “Dragon” hull, the frontal part of the tower had a thickness from 120 to 200 mm, and the walls had a variable thickness from 60 to 135 mm. 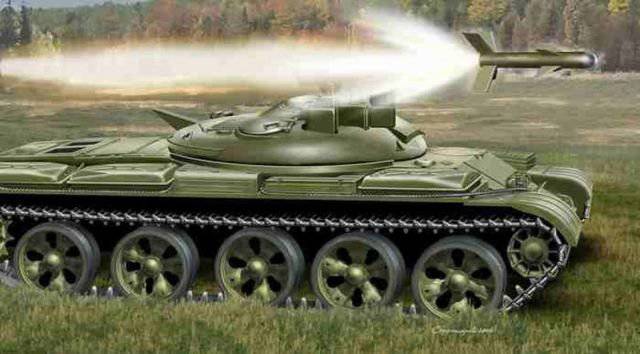 Armament IT-1 included a complex of guided weapons - QUV 2K4 "Dragon" (the main armament of the machine), as well as auxiliary weapons - 7,62-mm PKT machine gun. The PU of the Dragon missile tank was transferred from the traveling position to the ready position in 1-1,5 minutes, from the ready position to the operational position in 6 seconds. The complex could continuously work for 4 hours.

Weapon complex and its use

The dragon guided weapons complex as part of IT-1 made it the only tank fighter in the world that was brought to mass production and the first combat vehicle in the world that was armed with anti-tank systems with a semi-automatic ATGM targeting system and was able to to fire immediately. The basis of the armament of the machine was the TOURS 3М7 (caliber 180-mm, weight - 50 kg, length - 1250 mm, maximum flight speed - 200 m / s). His cumulative warhead ensured the penetration of 250-mm armor plates installed at an angle of 30 degrees from the vertical. Automating the process of loading the PU ensured a firing rate of up to 5 rds / min and an aimed rate of fire - 2,5 rds / min when firing at the maximum range - 3000 meters.

Auxiliary armament machines consisted of 7,62-mm PKT machine gun (ammunition 2000 cartridges), which fit into 8 magazines-boxes. In addition, X-NUMX hand grenades F-12 in 1 bags, an AK-5 submachine gun in a case, as well as bags with 47 cartridges for it, a flare gun with 600 cartridges for it were located in the fighting compartment. 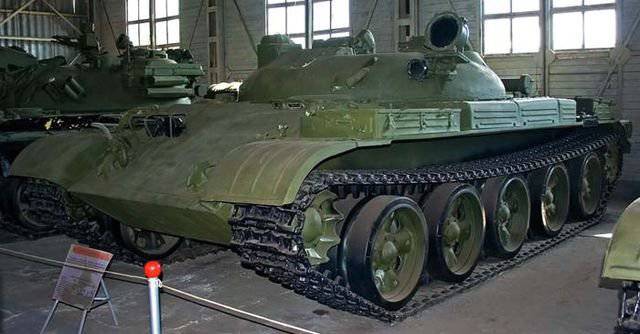 The ATGM located in the 1 IT Tower included:

- mechanized stacking of a rectangular type on 12 missiles (3 missiles in a row, 4 rows in height), which ensured the docking of the missile with the launcher and the displacement of the TOURS as they were consumed, another 3 missiles were in a non-mechanized ammunition;
- PU, in the initial position, located above the stack, after the loading process, took out the rocket to launch outside the tower, and after launching the rocket in automatic mode, it returned to its original position;
- HV station for automatic holding of the TURS on central marks (CM) of day and night sights, which included command generation and encryption units, coordinate retrieval, pulse radio transmitter on the magnetron in the 2-centimeter wavelength range, stabilized in the vertical plane of the antenna (phased a grating with a movable bottom plate located on the frontal armor of the tower) and a waveguide path.
- day sight with remote gunner to keep the CM on the target and with a stabilized field of view, as well as night sight;
- tower stabilizers in the horizontal and vertical plane, tracking the position of the day sight mirror;
- sensor of the transverse component of the wind to compensate for its impact on the guided missile in the ballistic part of its flight until the moment it is captured;
- single-phase-three-phase electric voltage converter;

When firing after receiving the command of the gunner-operator, the loading mechanism docked the rocket from the combat pack to the launcher, the required voltage was applied to the Tours. After this, a special hatch was opened, through which the PU raised the missile to a combat stabilized position, exceeding it by about 7 degrees, this was necessary to compensate for its fall in the ballistic flight segment. At the same time, the front and rear supports of the rocket were reset, freeing its folded rudders and stabilizers. Luke issuing missiles closed.

After that, at the command of the gunner-operator, the launch of the rocket’s starting engine took place, after reaching the thrust level, which was enough to cut off a special insure stud, the rocket was launched. At the final stage of the rocket engine operation, the rocket could reach the flight speed at the level of 200 m / s, which was further maintained using a powder propulsion engine. After the termination of the work of the starting engine by the VN station, the missile was “captured” and the Tours was transferred to the controlled flight mode. The gunner-operator controlled the target displacement center. The process of holding the anti-tank missile on the CM of the sight was provided by a special station 1С7. 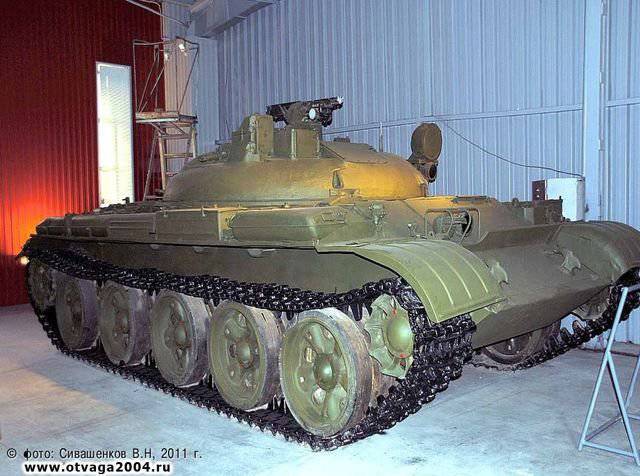 Target detection and recognition was carried out visually. After the launch of the rocket, the gunner-operator accompanied the target manually, holding the mark of the sight on it. The process of automatic tracking of the rocket in the picture plane along the tracer installed on it was carried out using an optical-television coordinator with automatic generation of control commands. Such commands were transmitted in the form of coded radio pulses through the complex-stabilized horizontal and vertical planes of the complex’s phased antenna located in front of the tank turret to the ATGM receiving antenna in the centimeter range. In the future, the incoming radio commands were transformed and fed to the rocket actuators, which are using an at-pressure 150 atm. air influenced the ATGM drives, ensuring its retention on the aiming line.

IT 1 was in service with the Soviet Army all year 3. According to the plans of the military, all motorized rifle divisions that were deployed in tank-dangerous directions were to be equipped with separate battalions of tank destroyers. In total, 2 managed to form full-fledged battalions: one in the Carpathian region, the other in the Belarusian military districts. In the process of testing and operation of a fighter tank IT 1 "Dragon" has demonstrated quite high reliability - up to 96,7%, but its design flaws: large mass and size, outdated element base, rather large dead zone, the lack of a gun caused the machine to be removed from service . This machine has never participated in hostilities and has not been exported.

Ctrl Enter
Noticed a mistake Highlight text and press. Ctrl + Enter
We are
Middle tanks in the postwar period. "432 Object"T-62A: one of the last medium tanks
29 comments
Information
Dear reader, to leave comments on the publication, you must to register.