September 2013. Belgrade (Serbia). Representatives of three Serbian parties at once spoke in favor of rejecting European integration and beginning negotiations on joining the Customs Union with Russia, Belarus and Kazakhstan.

2012-2013. The Pridnestrovskaia Moldavskaia Respublika. The work of the organizing committee to hold a referendum on the accession of the Transdnistrian Moldavian Republic to the Customs Union

October 2013. Crimea (Ukraine). Rallies under the slogan "Ukraine for Russia - brothers, for Europe - slaves" for holding a referendum on Ukraine’s accession to the Customs Union.

For the time being, the official authorities (except for the PMR) of the states in which rallies and other events are held in support of their entry into the Customs Union with Russia, Belarus and Kazakhstan do not pay special attention to speeches and initiatives. They do not pay, mainly because they fear the wrath of European “friends” who want to keep Eastern “partners” on a short leash and at the same time do everything to ensure that the full-fledged (mutually beneficial) integration of these “partners” with the EU does not take place. The task of the top of the European Union today is to get new markets for products of European companies, at the same time blocking supply markets inside their territorial entity from Moldovan, Ukrainian, Serbian and other states called for “European integration”, dictating their conditions to Kiev, Chisinau, Belgrade.

Inside these and other states, groups are artificially created whose task is to demonize not only the fact of the possible entry of these countries into the Customs Union, but also this union itself. For example, a rally was recently held in Armenia, which was actively covered by DeutscheWelle and was organized by the defeated presidential race Raffi Hovhannisian, who lost in his time, telling the audience that, say, the Customs Union is a bondage for Yerevan that will force Armenia to say goodbye to independence forever and turn the “flowering state” into backward economic backyards. In general, the rhetoric, which can impress only the very impressionable, and those of them who are absolutely not familiar with the structure of the Customs Union, or with the principles of work, or with those economic indicators, which shows the vehicle. 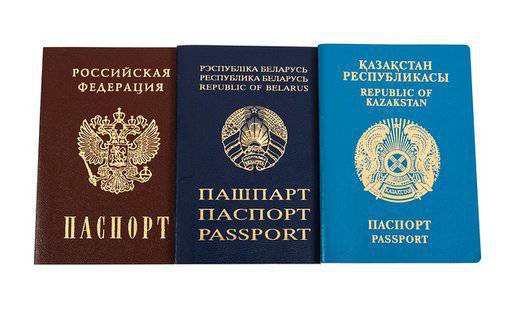 Therefore, it is worth mentioning in greater detail the “digital” part of the work of the Customs Union and outlining the main priorities for the existence of this economic territorial unit.

So, today there are three states in the Customs Union: Belarus, Kazakhstan, and the Russian Federation, uniting a huge, almost 170-million market. The concept of "Customs Union" in this case means the presence of a single customs tariff, a unified system of economic protective measures, a unified system of sanitary, phytosanitary and veterinary control, a unified system for regulating relations with foreign markets. In other words, a wide variety of goods without any customs obstacles can move across a vast territory from Minsk to Vladivostok. This allows you to free up huge funds and save a lot of time. During the existence of the Customs Union, and this is just 3 of the year, the turnover of goods between the countries in the union has grown by almost a third, the trade turnover between the states has significantly increased. If we express the turnover figures in absolute figures, then in each case bilateral economic contacts reached record levels: thus, the trade turnover between Kazakhstan and Russia amounts to 770 billion rubles, between Kazakhstan and Belarus - almost 30 billion rubles, between Russia and Belarus - almost 1,5 trillion rubles. This is despite the fact that, for example, in 2008-2009, the trade turnover between the Russian Federation and the Republic of Belarus amounted to 850 billion rubles. Almost double the growth in 4-5 years! Moreover, the bulk of this growth comes at the time of integration into the Customs Union. This more than clearly confirms the fact of a high economic return from such integration.

In terms of trade turnover with Russia, Belarus entered the 6 place among the main trade partners of the Russian Federation, having surpassed such countries as Poland, the USA, Turkey and Japan in just a couple of years. Ahead are still difficult to reach China, Holland and Germany, but Italy and Ukraine, according to some economists, Belarus in terms of turnover with the Russian Federation can overtake already in the next two years. The other day, the Ukrainian side noted the sharpest drop in commodity turnover between the Russian Federation and Ukraine over the past two decades - 25% in the eight months of this year. As they say, Belarus will not be able to overtake, so the Ukrainian president will help, bringing trade relations with the Russian Federation to such a deplorable state, which was not even during the presidency of Viktor Yushchenko.

Starting from 1 in January, 2014 will also eliminate oil duties, which will be a withdrawal of the latest trade restrictions. In principle, such agreements on hydrocarbons exist today (calculated on limited volumes) - on gas. Thus, gas is supplied to consumers inside the vehicle at a single tariff, taking into account the price increase for its delivery: closer to the fields - cheaper, farther from them - respectively, more expensive (for example, today consumers in the Kaliningrad region receive gas even more expensive than consumers in Belarus) .

It should not be thought that the turnover within the Customs Union is a continuous trade in minerals in the form of raw materials. A large percentage of turnover is made up of such sectors of the economy as engineering, food trade and metalworking. For example, revenues in the engineering and metalworking industries in the Customs Union are every 3 th ruble earned, and more than a quarter is high-tech engineering, which has become somehow unacceptable to say in hyperliberal environments - that's because the anti-union PR- you can't build a company ...

During the three years of the CU existence, the trade turnover between Kazakhstan and Russia has increased by almost 60% due to the elimination of the previous customs barriers.

It is important to note that during the existence of the vehicle no loss of anyone’s independence occurred. Any Moscow, Astana, Minsk Minsk (or vice versa) announced from outside the dictate of conditions did not happen. The markets of all three countries in the Customs Union are open to each other, which does not give customs “well-wishers” a reason to practice rhetoric on how Putin, Lukashenko and Nazarbayev economically and politically stifle each other, trying to share a big union pie.

We present a diagram reflecting the results of a sociological survey conducted by the Center for Integration Studies of the Eurasian Bank in the CIS countries. The question was: how do you feel about the fact that the Russian, Belarusian and Kazakh economies have united in the Customs Union? There were three possible answers: positive, in no way and negative. The diagram shows the percentage of those polled who said they were positive about the economic integration of the Russian Federation, Belarus and Kazakhstan. As can be seen, only the respondents in Azerbaijan reacted with caution to the integration of the three countries into the CU. 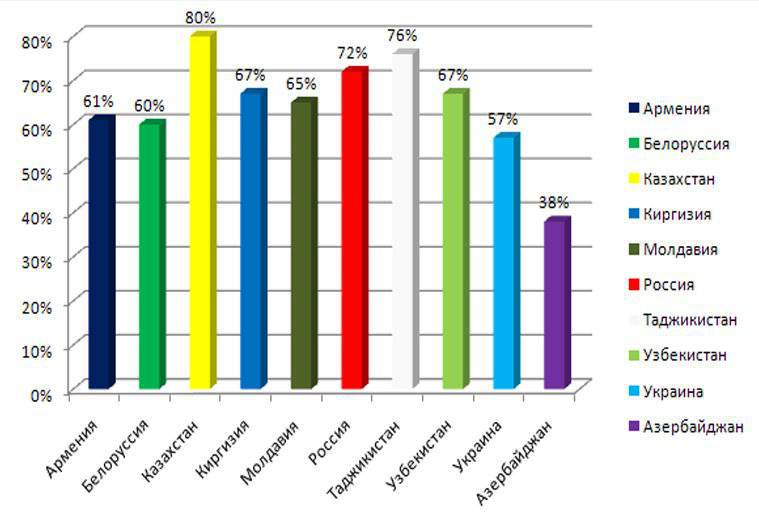 Ctrl Enter
Noticed oshЫbku Highlight text and press. Ctrl + Enter
We are
Moldovan independence: 24 of political uncertaintyArmed Forces of Transnistria: 23 of the year since its foundation
301 comment
Information
Dear reader, to leave comments on the publication, you must to register.