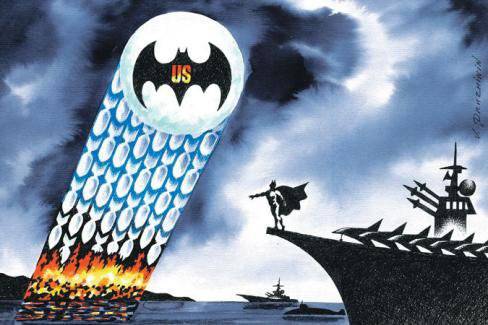 - Nikolai Viktorovich, the hostility of the USSR and the USA was ideological: we built communism, they are capitalism. But now, in Russia, too, capitalism, but America is still plotting us intrigues...

The first must develop a fleet to defend their resources. And the latter should cut them off from the coast and take away resources. Britain and the United States - the classic powers of the sea. We are the quintessence of sushi.

We can be “red”, “green”, even though the backshades are in the back, but geopolitics says: just like a great Eurasian civilization of land, the civilization of the sea will try to split and cut off the coast. This is what should be understood.

“But the West all the time insisted that it fights against the“ communist conspiracy against the free world ”...”

- I analyzed in my book. Those Russian sovereigns who developed the fleet were dying as a result of strange diseases or palace conspiracies, which surprisingly coincided with situations when Russia had only half a step to strategic victories. After the death of Peter I, for example (which, it seems to me, wasn’t due to natural reasons), Russia went through a series of palace coups and was cast off for a long time to second roles in Europe. Without fleet they begin to choke us and push us deep into the continent. Recall the collapse of the USSR. Which republics of the former Soviet Union were immediately admitted to NATO, cut off from Russia and sent troops there? Baltic. Why? This is access to the sea. And according to the canons of geopolitics, the first steps that a sea power should take are to cut off the land civilization from the sea and create puppet regimes in coastal zones against the land civilization.

- And for this reason, the United States and Britain are so interested in having regimes unfriendly to Russia in Ukraine and in Georgia?

- Of course. The task is to cut off Moscow from the Black Sea as much as possible. As for Ukraine, here is another goal. This is an important part of the Russian people. And according to the principle of “Divide and rule,” it is necessary to incite one part of the people against another, while being on the sidelines. The British did the same in India. They created, leaving from there, several states, as a result, Indians from Pakistan are fighting with Indians from India. We can also recall two Ireland, two Sudan ... This is a classic of the genre.

- This is a Roman model "Divide and Conquer." It’s just that these guys have mastered the system of putting off peoples like no other. What did the British do when they came to America? They pitted the Indians, and then gave them blankets infected with smallpox. Fire water plus smallpox, as a result, millions of Indians were destroyed. The Russians, when they came to some region, never did that. On the contrary, local conflicts were immediately extinguished. Take Dagestan. More 100 peoples. Languages ​​are different. Millions of conflicts. There was an endless war. Russia came to the Caucasus - the reason for the war was gone, the enemy was already on the other side of the borders. You ask yourself the question: why are “color” revolutions taking place in those countries that are beginning to matter in the geopolitical situation, and not in those where human rights are worse and harder on people? And why does the US support the revolutions there?

- I went to rallies of the “swamp” opposition in Moscow. There were many people who sincerely believed in their ideals.

- Always so. At the head of any revolution is a few paid agents, ambitious or just bastards. All others do not receive any dividends and believe in ideals. But they are being manipulated. And there is always a group of "orange" elite, which receives a mandate of immunity from the United States. Please note, such revolutions work in those countries where the pro-American regime is already standing. Take Egypt.

- Mubarak was an ally of the United States.

- Yes. But the Americans forbade Mubarak to use force against demonstrators. As a result, he resigned ... Kiev, Mr. Kuchma is sitting, who is more pro-American and not at all pro-Russian. The United States makes it clear to him that if he suppresses the Orange Revolution by force, it will end badly for him. Take Georgia. Shevardnadze, who is guided by the United States ... Well, where the regime is not pro-American, bombings are taking place, as in Yugoslavia, Libya, as almost happened in Syria ...

- Let's remember, with the return of Putin to the presidency, our policy has seriously changed. And the Americans understood perfectly well that Putin would bother them. Now ask yourself. So you, being in the leadership of the USA, would pay the opposition in Russia, which will help you to prevent Putin from returning? Of course they would! First, it is cheap. Secondly, you solve your problems immediately, not only within Russia. The man who heads Russia is interfering with your plans in many parts of the world. Now, remember the main slogan of the "swamp" opposition: "Anyone, not Putin." And when did the activization of the opposition begin? After the decision was made to return Putin. You just need to match the interests of the most powerful Western power with the actions of pro-Western forces in Russia. And the mosaic will develop.

- But hardly anyone would dare bomb Russia?

- As shown by 1991 year, bombing is not necessary. Let's face it. Gorbachev destroyed not only the USSR, he returned to our geopolitical opponents that Peter I and Catherine II had been taken from them. Because Peter I bought the Baltic lands as a result of a long war with the Swedes. Catherine II annexed the Crimea. And Gorbachev gave. He did not squander the Soviet legacy, but the fact that for centuries our ancestors were bloodied and then conquered. And this all happened, as in 1917, under the talk of freedom. Now this dope from the majority of our people was asleep, they see that the threats have not disappeared.

- For example, from China?

- Throw. China is a land state that has more contradictions not with Russia, but with the states of the sea. The threat of China is deliberately pedaled by pro-Western forces inside Russia. Because their task is to embroil Russia and China and repeat the scenario of the First World War, when the British were pushed between two continental powers. Now they would like to entrust the role of Germany to China.

- It turns out that geopolitically, we are with Britain - enemies, and with Germany - allies. But in alliance with the British, we have already fought against Germany ...

- The First World War - it was a strategic miscalculation of Nicholas II. As a result, the Russian Empire was destroyed. The British managed to draw Russia into conflict with those with whom it should have been friends - with the Germans. The Second World War was already on the conscience (if, of course, he had a conscience) Adolf Hitler. But today, Germany is no longer a land state, it has entered into a large maritime association, NATO. Ask yourself the question: what are American, British and French troops doing in Germany today? From whom do they protect her? From Poland - a member of NATO? Maybe from France itself - a member of NATO? They defend Germany there from the Germans themselves! This is an occupational army. Similarly with Japan.

- Can Russia restore what it lost with the collapse of the USSR?

“Stolypin also said: give a decade of peaceful development, and you will not recognize Russia.” The main thing for us is to stay away from conflicts. But the restoration of Russia is impossible without the inclusion in its zone of influence of other parts of Russian civilization. And first of all - Ukraine.

- If we need to avoid conflicts, why do we quarrel with the United States over Syria?

- Syria is not a goal of world players, but a point of application of forces to achieve a goal. The United States and Britain are consistently destroying the statehood of the countries of the Middle East in order to create chaos at the borders of Russia and China. Russia was able to halt the progress of this chaos, changing the international opinion on Syria with a brilliant proposal to control its chemical weapons. On the other hand, Putin gave Obama a chance to get out of the clinch without losing face.

- If the States are our geopolitical opponent, why do we give them to save face?

- The US is decrepit, and the West comes to a standstill due to its financial model based on the dollar. Our task is to prevent the collapse of this model at once. Otherwise, for the United States, the only way out will be a big war. The task of Russia and China is not to let the war begin, dismantling the dollar system smoothly.

- In my opinion, you are an overly optimistic about our future.

- World Cup, too, no one can win once and for all. As well as lose. If we in 1991 have lost territories and influence, this does not mean that we have lost them forever. There is no place for despondency. There must be a place of understanding. The main thing is that the great geopolitical players, whom the Russian land gave birth to often, continue to come to the leadership of Russia.

Ctrl Enter
Noticed oshЫbku Highlight text and press. Ctrl + Enter
We are
The world we leave, the world we enter, and the world between themA great interview with Sergey Lavrov: about Ukraine, Obama and Iran
299 comments
Information
Dear reader, to leave comments on the publication, you must to register.