October 14 2013
4
One of the most famous small-caliber automatic guns are Oerlikon 20-mm guns. Created in the twenties of the last century, the design, undergoing changes, was able to gain great popularity and become the basis for several new tools. At the same time, the Erlikon guns themselves were not a completely new development of the Swiss gunsmiths. The first guns of this series were created on the basis of an even earlier German-made cannon - the Becker Type M2. 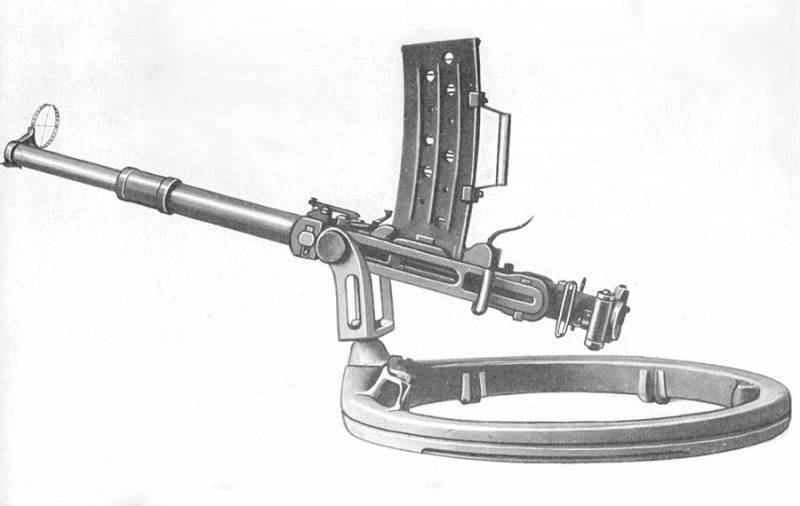 History The Becker Type M2 project began in 1913, when German engineer Reinhold Becker patented the principle of the operation of small-caliber automatic artillery. According to some sources, Becker was not the author of this system, but was the owner of Stahlwerke Becker AG, on which the Kenders brothers worked, who had developed a preliminary draft of the gun. Regardless of the origin history, the Type M2 automatic gun is considered a development by R. Becker.

Shortly after receiving the patent, Stahlwerke Becker AG proposed a new concept of a cannon to the German military. At first, the command of the army reacted to such a proposal with caution. Potential customers in the face of the German commanders were embarrassed by the fact that R. Becker’s company had no experience in developing any cannon weapon systems. However, the original design looked promising, and after several months of discussion and resolution of bureaucratic issues, in June 1915 of the year, the command of the German army issued technical requirements that the new automatic gun for the aircraft had to meet.

In accordance with the terms of reference, Stahlwerke Becker AG was required to submit an automatic caliber gun to 37 millimeters with a mass of no more than 70 kilograms. Requirements for combat characteristics were formulated quite simply: the prototype had to make a line of ten shots. Soon, the employees of the developer made an experimental copy of the Becker cannon, which was installed on the Gotha GI bomber. The first firing showed that the gun was in need of significant improvement in its current form. Automatics of the gun could prove its efficiency, but its reliability did not meet the requirements of the customer.

However, the stated capabilities of the gun, as well as some test results, led to the German military ordering them to continue working on the project. To speed up work on the development of Becker’s guns, they recruited staff from the arsenal in Spandau, who had extensive experience in creating and operating small arms weapons and artillery. The help of experienced engineers had a beneficial effect on the project. By June 1916, all design work was successfully completed, after which the military ordered a batch of automatic guns from 120. 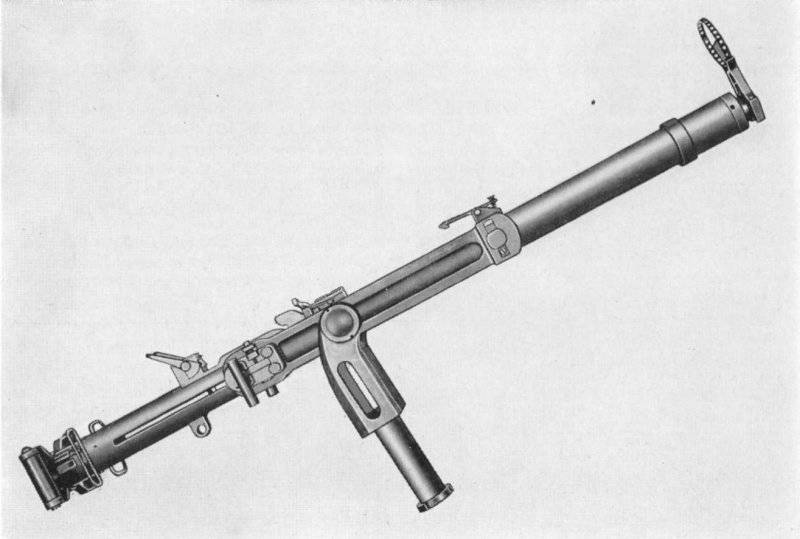 By this time, the technical appearance of the instrument was finally determined, which later did not undergo any significant changes. As conceived by Becker and / or the Kenders brothers, the automatics of the cannon used a system with a free gate and advanced ignition of the primer. This means that the drummer hit the primer before the projectile was fully in the chamber. For several moments after hitting the cap, the shutter continued to move forward, sending the shell into the chamber. After that, the pressure of the powder gases in the barrel reached a maximum value and shifted the valve back. Moving to the extreme rear position, he removed the cartridge case from the chamber, which was thrown out by the corresponding mechanisms. The supply of 20x70 mm shells was carried out from a box magazine at the top of the gun. Magazine capacity - 10 or 15 shells.

The use of such an automation system made it possible to meet the customer's requirements with a large margin. The gun weighed only 30 kg and had a total length of 1370 mm, 800 mm of which accounted for the barrel. The barrel length 40 calibers provide the initial velocity of the projectile of the order of 490-500 meters per second. The technical rate of fire was at the level of 325 shots per minute. Due to the use of a low capacity box magazine, the actual rate of fire was much lower and did not exceed several dozen shots per minute.

In August 1916, the company Stahlwerke Becker AG and the arsenal in Spandau, tested the first batch of five guns. Test firing tools experimental party confirmed the potential of the new development. The highest combat effectiveness when firing at air targets was achieved when using high-explosive fragmentation projectiles with tracer. At the same time, the gun has retained some of the flaws identified in previous tests. Most complaints were caused by the box store. After some changes in its design, it was possible to achieve the required reliability. In November of the same year, the mass production of guns, called the Becker Type M2, began. 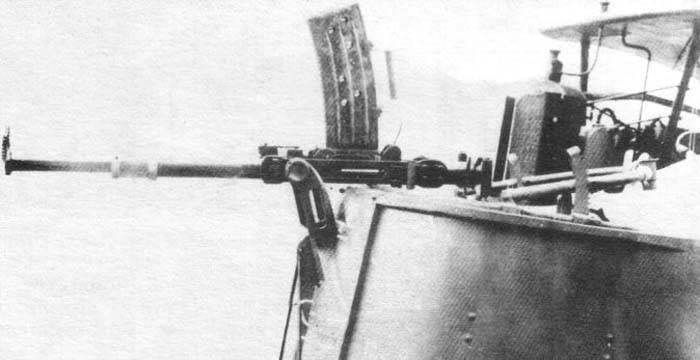 At the very beginning of 1917, German industry and the military department entered into a new agreement regarding Type M2 guns. Under this agreement, Stahlwerke Becker AG was to continue the production of automatic guns for the needs of the military aviation. The arsenal in Spandau and MAN were assigned the responsibility of manufacturing Type M2 cannons for the ground forces. During the first months, the ground forces used these guns exclusively as anti-aircraft guns, and then began to use them against tanks.

The automatic cannon Becker Type M2 was installed on fighters and bombers of ten types. It is noteworthy that the main carriers of this gun were the twin-engine bombers, such as Friedrichshafen G.III and AEG G.IV. The principle of operation of the automatics of the new gun did not allow to install it as a course weapon on single-engine fighters with a pulling propeller. The gun with advanced ignition of the cap could not be equipped with a synchronizer firing. In December, 1917 of the year started work on the creation of a certain system that allows you to use the Type M2 gun on existing single-engine fighters. These works continued until the end of the war, but did not produce tangible results.

Already after the start of mass production, the Spandau arsenal continued to improve the gun adopted for use. So the Spandau Type 3 cannon appeared. This tool was easier to manufacture than the prototype, but it turned out to be much heavier. In addition, the rate of fire fell to 250 shots per minute. A gun with such characteristics was not adopted. In the future, all enterprises engaged in the production of Becker guns, worked to improve the system of ammunition. Various designs of box and drum magazines, as well as systems of belt feed of shells, have been proposed and tested. Until the end of World War I, German engineers were not able to create a workable ammunition supply system, superior to the existing one. 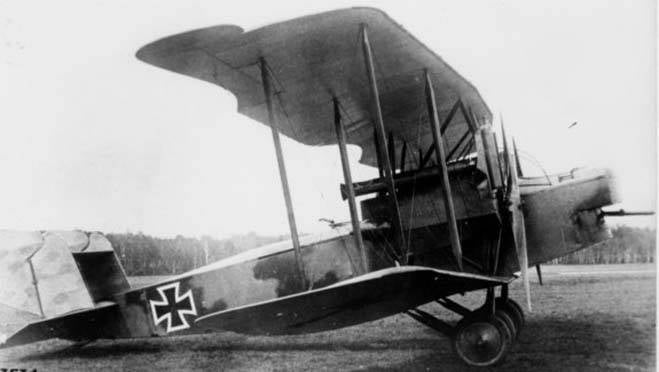 In two years, the German industry managed to manufacture several hundred Becker Type M2 guns, intended for installation on airplanes and machine tools. The exact number of guns produced remains unknown. There is only information that the number of guns exceeds 530-540 units. 362 guns "survived" until the end of the First World War and were transferred to the victor countries.

After the signing of the Versailles Peace Treaty, Germany was forced to abandon the mass of military projects. In this connection, Stahlwerke Becker AG sold a patent for the original design of an automatic cannon to the Swiss company SEMAG in 1921. Engineers from Switzerland continued to develop the ideas of German colleagues and created the SEMAG L gun, designed for a more powerful projectile caliber 20 mm. This development did not reach mass production, because in 1924, SEMAG went bankrupt and in order to pay off existing debts, it became part of Oerlikon.

New owners of the patent obtained by R. Becker more than ten years ago, also engaged in the development of previous developments. In 1927, the Oerlikon F, Oerlikon L and Oerlikon S guns appeared. They differed from each other in a number of design features. In this case, the gun Oerlikon F was a deep modernization of the gun Becker. In the future, this project became the basis for the gun Oerlikon FF. Some of the developments obtained during the creation of the latter were later used in other projects of small-caliber automatic artillery. Some direct descendants of the Oerlikon FF cannon are still in use.

Ctrl Enter
Noticed oshЫbku Highlight text and press. Ctrl + Enter
We are
An-12 in AfghanistanHistory of Soviet Aviation. Polikarpov P-1 - the first serial Soviet aircraft
4 comments
Information
Dear reader, to leave comments on the publication, you must to register.