Astana and Minsk did not agree with Moscow

October 12 2013
291
In contrast to Russia, Belarus and Kazakhstan believe that the Eurasian Union being created should be an economic, not a political association. Experts explained DW why Moscow is losing influence on the allies. 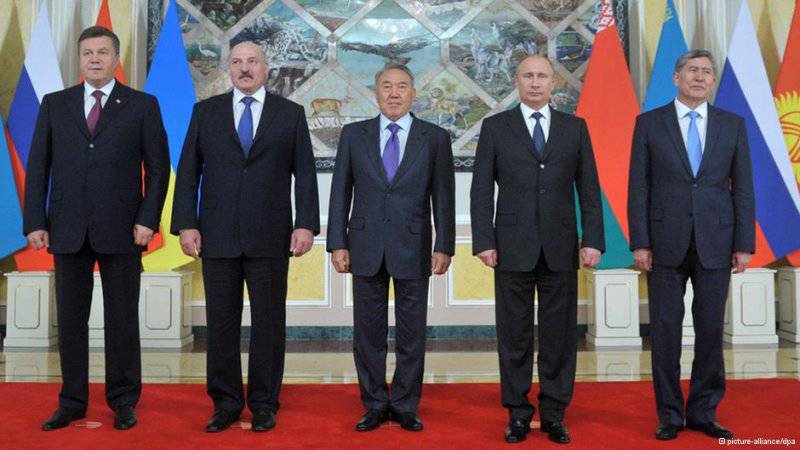 The work on the draft treaty on the Eurasian Union revealed many contradictions between the member countries of the Customs Union (CU). The document should be prepared for 1 in May 2014 of the year, and the Eurasian Union according to plan should begin its work from January 1 of 2015. But it turned out that Belarus and Kazakhstan, unlike Russia, consider the Eurasian Union not to be a political, but exclusively an economic association. “We are creating an economic union,” reminded Belarusian President Alexander Lukashenko, stressing that there can be no unification in the political sphere that is being talked about in Moscow. The economic integration has been repeatedly declared by the leader of Kazakhstan, Nursultan Nazarbayev.

Minsk and Astana are not trying to create a supranational parliament of the Eurasian Union and introduce a single currency, as Russian Prime Minister Dmitry Medvedev called for. According to experts, the reason for the divergence of views is distrust of each other and the different goals of the participants in the integration process.

“Issues of political integration, the introduction of a single currency and the creation of a single emission center are the main stumbling block in relations between the countries of the future Eurasian Union - Russia, Kazakhstan and Belarus,” said Yevgeny Minchenko, director of the Moscow International Institute of Political Expertise. According to him, "these topics have become the object of serious trade between the participants of the integration project."

Belarus and Kazakhstan are also worried about the intensification of competition in the Common Economic Space (CES), where Russia is the main player. According to Minchenko, Minsk and Astana are also dissatisfied with the prospect of expanding the Customs Union and joining Armenia, Kyrgyzstan and Tajikistan.

The disagreements of the CU partners also came to light when trying to develop common standards for customs legislation and the tax system, said Ye.T. Gaidar Sergey Prikhodko. The leadership of Belarus and Kazakhstan reluctantly recognizes the priority of the legislation of the Customs Union over local laws. In an interview with DW, Prikhodko stressed that the conflict of interests was initially incorporated in different control systems and in the economic mechanisms of the three states, which would inevitably provoke centrifugal trends in the TS.

Belarusian oil in the fire

But director of the Belarusian Institute for Strategic Studies (BISS), professor at the European University in St. Petersburg, Alexei Pikulik, commenting on DW recent statements by the Belarusian leadership about the rejection of a political union with Russia, argues that Minsk was not initially seeking to create it. “The authorities made promises that they did not plan to fulfill, and hoped for the longest and most beneficial use of the vehicle’s loopholes,” Pikulik said.

“Now Belarus, uniting with Kazakhstan, adds fuel to the flames at the negotiations on the project of the Eurasian Union, trying to take advantage of the situation when Putin is weak and more accommodating because he loses Ukraine before his eyes,” says the analyst.

Kazakhstan political analyst, director of the Risk Assessment Group, Dosym Satpayev, explaining DW the reasons for the allies' contradictions, believes that there is no sense for Astana and Minsk to agree on political integration with Moscow, since state sovereignty is at stake. Moreover, in Kazakhstan, the opposition is also in favor of withdrawing from the Customs Union. This can not be ignored by the country's leadership, believes Satpayev.

Why Moscow is in a hurry

Participation in the Eurasian Union is not the only opportunity for foreign policy orientation for Kazakhstan. The country's leadership does not rule out cooperation with Turkey, which would like to create its economic Turkic-speaking union, as well as with China, Russia's main competitor in the post-Soviet space within the Shanghai Cooperation Organization (SCO). Astana, unlike Minsk, also maintains normal relations with Europe and the USA, noted Satpayev.

Belarus has more vulnerable economic zones that Russia can influence. Therefore, the Belarusian government with caution looks at joining the Eurasian Union. According to Alexei Pikulik, a professor at the European University, Minsk is afraid to transfer to Moscow the responsibility for making political decisions in the field of economic restructuring and the deprivation of individual privileges that hold big business and that are illegal in the CU. The introduction of a single union currency will not allow Minsk to play in macroeconomic populism and means losing control over the country, the Belarusian political scientist believes.

Dosym Satpayev also noted that the refusal of Minsk and Astana from political unification with Moscow is a response to its tough steps to tame Ukraine and Moldova, which have chosen the path of European integration. “Under beautiful statements about mutual trade interest in the CU, Russia with the help of the Rosselkhoznadzor also prohibits the delivery of products from Kazakhstan and Belarus,” the expert notes.

He explains a number of problems in the Customs Union by the haste of its creation. “The Kremlin is in a hurry to quickly draw up an agreement on the Eurasian Union, because this document can only be signed with the current Belarusian and Kazakh rulers,” the analyst believes. After the change of leadership, the participation of Kazakhstan and Belarus in the Eurasian Union may be short-lived, predicts Satpayev.