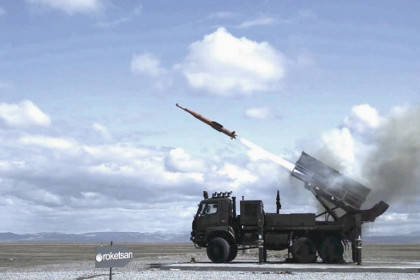 A few days ago, the Turkish Defense Ministry announced the first tests of a new anti-aircraft missile system. At the Tuz test site, employees of Roketsan and Aselsan conducted a test launch of an anti-aircraft missile of the promising Hisar-A complex. In the coming years, all testing and development work should be completed, after which the new complex can be adopted by the ground forces of Turkey.


The T-LALADMIS program (Turkish Low Altitude Air Defense Missile Systems - “Turkish Low-altitude Air Defense Missile System”) was launched in 2008 year. By order of the Turkish Ministry of Defense, the contractor company was to create a short-range air defense system for air defense of troops on the march and in positions. In addition, the conditions of the tender implied the construction and supply of several dozen combat and auxiliary machines, as well as all the necessary related equipment. The technical task for the project was sent to two dozen Turkish companies. In addition, several foreign organizations have expressed their desire to participate in the program.

About a year after the start of the program, the submitted applications were reviewed, but the selection of the contractor was delayed. Only in 2011, the company Roketsan became the main contractor for the T-LALADMIS program. In addition, the project attracted the organization Aselsan. The responsibilities of these companies were defined as follows. Roketsan specialists engaged in the development of the rocket and a number of related equipment. In addition, they carried out the overall coordination of the work of the organizations involved in the project. The company Aselsan entrusted the development of the main part of electronic systems. The joint development of the project allowed the beginning of 2013 of the year to create a finished project of a promising anti-aircraft missile system called Hisar-A.

According to reports, the Hisar-A air defense system will be a system for air defense of objects and troops. The modular architecture will allow building the machines of the complex on different types of chassis with a wheeled or tracked undercarriage. The anti-aircraft complex will include machines with a radar target detection, command post, launchers and missiles. From open sources it is known that the Hisar-A air defense system will be able to hit targets at a distance of about 12 kilometers. The range of heights has not yet been named, but the name of the program suggests that when creating an anti-aircraft missile and electronic systems, the need to hit targets at low and medium altitudes is taken into account.

Among the well-known details of the project is information about the rocket with a vertical launch. However, during the September test launch, the prototype rocket was launched from an inclined launcher. The reasons for this particular test were not specified. Probably, the work on missile control systems, which allow a full launch from a vertical launcher, has not been completed by now.

According to the Turkish Ministry of Defense, during the tests, the rocket successfully left the launcher and reached a predetermined area. All telemetry data is fully consistent with the calculated. No new test launches have been reported yet. Probably, after the first tests, specialists from companies involved in the Husar-A project will deal with the identified deficiencies and fine-tuning the design of the missile itself and the ground systems of the complex.

A lot of time is allotted for these works. At the moment, the work schedule, approved at the very beginning of the T-LALADMIS program, remains relevant. In accordance with it, the next few years it is planned to spend on the completion of the development of an anti-aircraft missile system, tests, etc. work. Approximately to the 2015-16 years, the final tests should begin, the results of which will determine the adoption of a new air defense missile system. The Turkish Army intends to receive the first Hisar-A production complexes in 2017.

With regard to the required number of anti-aircraft systems, the same plans are currently in force as at the beginning of their development. The existing contract with the companies Roketsan and Aselsan implies the supply of 18 complexes consisting of self-propelled radars, control machines and self-propelled launchers. In addition, the ground forces of Turkey will receive several simulators for the preparation of calculations. In addition to a solid contract for the supply of ready-made anti-aircraft systems, there is an option for additional 27 complexes. Probably, an additional batch of SAMs will be ordered in the event that the finished Hisar-A system completely suits the customer.

Simultaneously with the Hisar-A project, Roketsan and Aselsan are working on an anti-aircraft complex called Hisar-B, created under the T-MALADMIS program (Turkish Mid-Altitude Air Defense Missile Systems - Turkish Mid-Air Defense Missile System). The purpose of the second project is the creation and construction of a medium-range air defense system, capable of complementing the Hisar-A complex in the army. On the timing of the start of testing and adoption of the complex Hisar-B has not yet been reported. According to reports, the Turkish Ministry of Defense and contractors have now focused their efforts on building a short-range anti-aircraft system. They are going to first complete the Hisar-A project and only then begin to develop the Hisar-B SAM system, using the experience gained in creating the previous anti-aircraft system.