For two hares ... Or what choice do Ukraine? 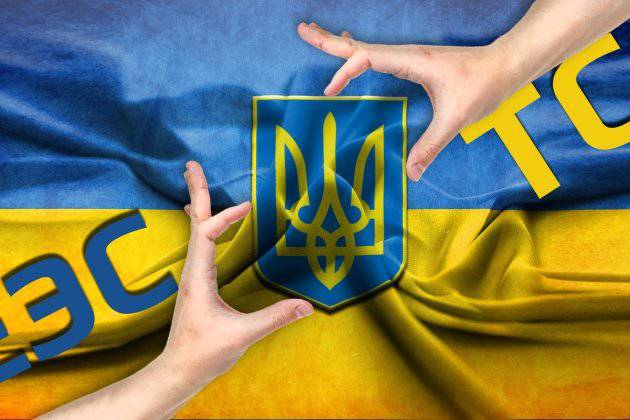 Today, Ukraine faces the need to address a very important issue for the country - to join the European Union or join the Customs Union. Surprisingly, no one even considers the option that the country will be able to independently build its future, while maintaining friendly relations and mutually beneficial relations with both its eastern neighbor and the western community. Always starting a new business, there is a risk of failure. But a mistake can cost Ukraine the loss of its statehood and complete subordination to a stronger and more successful neighbor.

It is always better to learn from the mistakes of others. And the experience of the former Soviet bloc countries that have joined the EU, such as Romania, Estonia, Lithuania, Bulgaria and Latvia, best of all demonstrates what Ukraine can expect in a “European paradise”.

Most likely, Ukraine will join the EU as an incomplete federal district of Western Europe. Kiev, not having the right to vote, will be obliged to carry out all the decisions taken in the corridors of Brussels. The EU, of course, will require opening the Ukrainian financial market for European banks. But Western financiers do not care about the development of the Ukrainian economy. Upon entering the still capacious Ukrainian market, they will do everything to get super-profit. And the fact that the majority of citizens and enterprises will be in the networks of debt obligations in the EU, few people are interested. With the hands of bankers, European industrialists will destroy the Ukrainian competitors, leaving only "screwdriver" (assembly) production. There is a possibility of losing control over strategic and infrastructural Ukrainian enterprises, if the Westerners plant them on a “debt needle”.

In Soviet times, Ukraine was proud of its engineering. Now it is difficult for this industry to survive in new conditions, but we must pay tribute to the leaders of the engineering industry - they are making every effort to preserve the Ukrainian engineering potential. The president of one of the largest enterprises of Ukraine, Motor Sich JSC, V. Boguslaev, believes that joining the EU will have a detrimental effect on the entire economy of the country, including engineering. One of the arguments sounds convincing enough - after all, now in Europe there is 30% unemployment, why lead the country to the European “unemployed paradise”. There is one more important argument - Ukraine is not ready to transfer its engineering (and not only) products to European standards, and, therefore, Ukrainian goods will not be in demand on the European market. Before our eyes, the unenviable fate of Romania, Bulgaria and the Baltic states, which have lost their industry in favor of the Europeans. They are now happy even to any repair company serving the Europeans on their territory. It is unlikely that Ukraine will be able to maintain its high-tech production, becoming a member of the EU.

There is a fairly large risk that defense enterprises will also be on the verge of destruction: after all, European gunsmiths will not tolerate a new competitor on the European beachhead.

On the other hand, the Russian authorities, dissatisfied with the European choice of the Ukrainian authorities, have repeatedly demonstrated the possibility of taking protective measures against Ukrainian goods. For example, the toughened inspection introduced by the Russian side on the Russian-Ukrainian border was aimed at showing the Ukrainian side the advantages of membership in the Customs Union. Such actions are not an attempt to break ties between the two states, but only warn about a possible change in the terms of trade between countries. If Ukraine makes the final decision on EU membership, the Ukrainian defense industry will receive the most significant blow, Russia will also increase the price of energy supplied to Ukraine. Most likely, the terms of supply for most of the contracts already concluded will be revised, especially in the field of scientific and technical cooperation. Russia will look for other suppliers of products that it still buys in Ukraine today. For example, OJSC Helicopters of Russia have already reduced by 30% the volume of engine purchases from Motor Sich, having found reliable suppliers among Russian and Western enterprises.

Turning from a state of partners to a situation of competition, the two countries will be forced to compete in many areas on the world market. Wins the one who can produce better products without disrupting delivery times. Considering the economic situation in both countries, most likely, Russian enterprises that have already adapted to the conditions of tough competition will win. And Ukraine, in this case, is waiting for an increase in unemployment, a reduction in wages and, as a result, a deepening of social conflicts in the country.

Citizens of Ukraine, having lost their jobs, are stuck in debt, will be forced to join the ranks of cheap labor in European countries.

Some experts cite statistics that currently in Estonia, Latvia and Bulgaria, which have joined the EU before, 40% of the population lives on the verge of poverty, only 20% have found work in European companies and represent the middle class, only 3% of the population have an income enough to not think about their daily bread, but the rest live in poverty without the hope of improving their situation. It is unlikely that Ukraine is waiting for the best performance.

In turn, Kiev is trying to weaken the pressure of the Russian side on the issue of Ukraine’s accession to the Customs Union, moving the discussion to the plane of refusing the presence of the Black Sea fleet in Crimea. This topic arose from the filing of the head of the National Salvation Committee of Ukraine P. Nauss, who is confident that the EU will require the withdrawal of the Black Sea Fleet from Crimea so that the water area of ​​the Ukrainian part of the Black Sea will subsequently be available to the NATO fleet and UN “peacekeepers”. The leadership of Ukraine for the sake of the EU is even ready to unilaterally terminate the agreements signed in 2010 in Kharkov on the basis of the Russian Black Sea Fleet for 25 years with the possibility of further automatic extension of the term.

Note that for the fact that the Black Sea Fleet remained in the Crimea, the Ukrainian side received a discount on Russian energy resources. Today, the Ukrainian leadership believes that they are clearly “made a bad bargain” and demand a revision of gas contacts in the direction of cheaper gas supplies by the Russian side. The most interesting in this stories that Europe did not put forward any demands for the expulsion of the Russian Black Sea Fleet from the Crimea. Consequently, Kiev is trying to prepare public opinion in advance, linking the “wonderful future” in the EU with the supply of Russian energy, and the Black Sea Fleet has become just a bargaining chip in this dispute.

According to analysts, currently there are no prerequisites for the fact that Ukraine will be able to build at least some kind of "civilized" choice between the EU and the Customs Union. The problem escalated into an open political and economic conflict between the two countries. In turn, Russia, seeking the decision of the Ukrainian authorities that is necessary for itself, resorts to a policy of imperial pressure, disregarding the formally declared slogan of equal cooperation with Ukraine.

A reasonable question arises - can Ukraine exist independently? Sure. Having an educated and very able-bodied population, natural resources, and a convenient geographical position, Ukraine is able to build its future without regard for its neighbors.

Of course, the peoples of the two fraternal states will nevertheless find the only way that will allow the two countries to live in peace and good neighborliness.