Russia gives money to Ukraine and reduces the price of gas: reality or a hoax?

October 11 2013
76
Historyclose to the detective, manifests itself in these days. The plot of this story frantically revolves around the situation with unexpected financial assistance that Russia decided to provide to Ukraine after the leadership of the latter finally confirmed the course towards European integration - to sign an association agreement with the European Union. The first part of the assistance was expressed in granting Ukraine a loan in the amount of 750 million dollars allocated by Russian banks, as the Russian president put it, not without his knowledge. The second part is a significant reduction in the price of gas, which Ukraine pumps into its underground storage facilities to ensure uninterrupted supply of “blue” fuel to Europe. The help, it seems, is evident, as is evident, again, it seems, and the desire of the Russian leadership to level out the friction with the Ukrainian leadership. However, not everyone is sure that this is a real help to Ukraine, and they are not particularly sure of this (on) (as you like ...) Ukraine itself. This is a difficult question. We will try to get to know him better and understand. 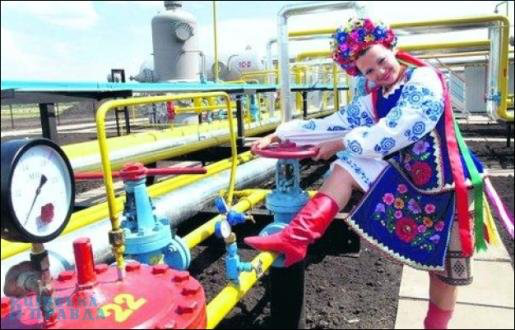 So, about two weeks ago, Russian banks, as it turned out, with the help of Vladimir Putin, decided to send $ 750 million to Ukraine. Why? Sergey Glazyev, an adviser to the president of Russia on regional economic integration issues (by the way, born in the Ukrainian SSR), responded to this question immediately after the “decision by the banks”. He noted that Ukraine has an impressive balance of payments deficit (about 10 billion dollars), and already today is experiencing significant difficulties in meeting its debt obligations to international creditors. These lenders today are less and less willing to give money to Ukraine, and if they do, then they raise the interest. The reason is a lowering of the credit rating of both individual companies and banks of Ukraine, as well as of the entire state (state economic system).
Despite the fact that all these rating increases and reductions often look like speculative moves of interested agencies, however, Ukraine is no better because the money was not so easy to give ... According to Glazyev, the Russian loan will allow the official Kiev to settle with other loans (loans that Ukraine received from international organizations) interest. And the fact that the credit ratings of the main Ukrainian enterprises and banks remained at the same level indicates that Russian money has ripened (on time).

Much more confusing is the story of the decline in gas prices. Vladimir Putin, at the APEC summit on Bali, said that Gazprom, again not without regard to the opinion of the Russian leadership, reduced the price of gas intended for underground storage facilities for Ukraine from $ 380-390 per thousand cubic meters to $ 260 for the same volume. The discount, indeed, looks more than substantial, but after such a step by the Russian leadership, Viktor Fedorovich is still not in a hurry to kiss Vladimir Vladimirovich. The reason for this “slow pace” may be that the gas discount directly touched Ukraine a little. The fact is that Gazprom sells gas first to companies with the remarkable name RosUkrEnergo, and then this company resells it to NaftoGaz (Naftagaz) in Ukraine. That is why many politicians, political scientists and ordinary citizens living on the territory of Ukraine were skeptical about the words of the Russian president that Gazprom reduced the price of gas specifically for Ukraine.

Let's return to RosUkrEnergo. This company was created in 2004, with a registered capital of just 35 thousand dollars (not the most impressive amount for a company that, in its best years, purchased 60 billion cubic meters of natural gas per year from Russia alone). The co-owners of the company, which is also noteworthy, are Gazprombank and Centragas Holding (Austria), and the company itself is registered in Switzerland. Co-owners of the “Austrian” part of the “Swiss” company are businessmen from Ukraine, the most famous of which is Dmitry Firtash, who just a week ago Viktor Yanukovych appointed a member of the State Commission for Cooperation with the WTO.

It turns out that the Russian company Gazprom lowered the prices for gas supplies for the company, 50% of which belong to Gazprombank - this time, for a company that itself resells Russian gas in Ukraine at convenient prices for itself, these are two. In other words, reducing the price of Gazprom gas to 260 dollars does not guarantee that it will be sold at the same price for the UGS of Ukraine. Of course, it does not guarantee only if Vladimir Putin did not oblige RosUkrGaz to use its administrative resources available to him (Putin’s) to moderate their appetites.
If obliged, then the discount will really work for Ukraine. And if not, then all the cards go into the hands of Dmitry Firtash, and he, in fact, is free to set any other price for the unexpectedly cheap Russian gas for his company. Now we need to expect information on what, and at what price, RosUkrEnergo, which procures today from Gazprom up to 17 billion cubic meters of blue fuel, will sell gas further. If the price increases significantly, it turns out that the concerns of the Ukrainian side were indeed unfounded, and the appointment by Yanukovich of Dmitry Firtash as a representative for contacts with the WTO will finally demonstrate the weakness of the Ukrainian president ...

If we distract from who and to whom it sells gas at a low price (as part of the material), another question comes to the surface: why did Vladimir Putin decide to make certain concessions (if these are really concessions)?
Obviously, the desire is one thing: as they say, a small “blood”, that is, rather small expenses, seem to the Ukrainian leadership that the ends have not yet been cut off, and that the chances of rapprochement remain. This is like a kind of demonstration of how it can be convenient and comfortable to integrate with Russia, and not with the EU, again, if gas prices ultimately really go down. If the Ukrainian leadership feels the real results of Russian easing, then targeting the course of rapprochement with the EU will simply be beyond common sense. If gas games are just games, then Yanukovych will only have an additional reason to accuse the Russian authorities of trade mystifications.

Ctrl Enter
Noticed oshЫbku Highlight text and press. Ctrl + Enter
We are
Dmitry Medvedev. Russia and Ukraine: life under the new rulesResults of the week. “And you, stupid, scoffed at me ... Here's a saying for you - don't wake famously, as long as it's quiet ...”
Military Reviewin Yandex News
Military Reviewin Google News
76 comments
Information
Dear reader, to leave comments on the publication, you must sign in.