America, look in the mirror!

October 11 2013
75
Warning of the upcoming default and crisis in October, Nobel Prize winner Paul Krugman in "New York Times" He poured poisonous criticism on Republicans blackmailing Barack Obama with health care reform — the one that the American people called Obamacare (pronounced either with mild irony or with contempt and frothy drooling). The fact is that this reform turned out to be a stumbling block between Republicans and Democrats: if the latter support Obama, the former believe that the rich people of America can easily do without the support of the medical reforms that concern the poor in their wallets. Republicans in Congress are naturally blackmailing the president: they say, let us raise the national debt ceiling to October 17, if reform is abolished. Obama refuses to blackmail. 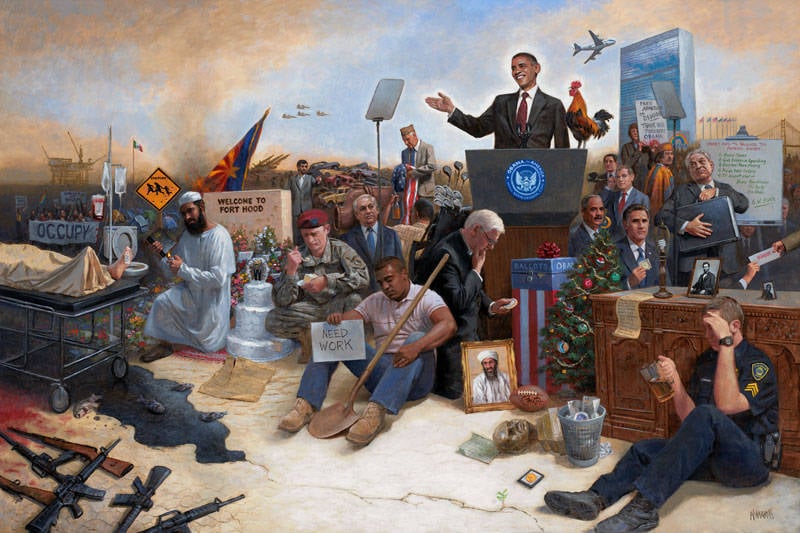 "Obamanation" - a particularly popular painting by the artist John McNaughton

Failure to raise the public debt ceiling will lead to the omission of payments on existing government debt, Paul Krugman said in a recent article. This is fraught with terrible consequences. The mere assumption that US bonds will lose reliability means a violation of the financial system. Such a default will create a huge crisis, before which, the economist writes, will fade the crisis associated with the "Lehman Brothers" five years ago.

Arguments about the politics and economics of these people Krugman calls "delusional."

Republican radicals, he notes with irony, generally oppose scientific consensus on climate change. Also, many of them reject the theory of evolution. How can you expect from these people that they will believe the experts, warning of the danger of default?

The economist and the Nobel laureate speaks of current American politicians, as well as those who voted for them, like madmen.

Of News It is known that on October 3, the US president canceled a trip to the APEC summit in Indonesia - the reason for this “shutdown” of the government. In the absence of Obama, Chinese leader Xi Jinping made a speech at the forum in which Obama’s name never sounded - as if that had been “turned off” along with America.

While Comrade C was speaking at the summit and was conducting backstage strategic negotiations with Comrade Putin, Mr. Obama frightened Republicans through his native television. Among other things, he said that he did not intend to make concessions regarding the budget, the channel said "RT".

In an interview with CNBC, the US president said: “If it becomes a habit for us that one party can be engaged in extortion, then no subsequent president will be able to effectively run the country. I only know that the American people — and I have to admit that businessmen, too — are tired of the constant transitions from crisis to crisis. ”

Very interesting, we note, the division of the US population - into businessmen and the people themselves. Such a critical approach is understandable: just businessmen who are ready to strangle themselves because of a couple of dollars, and oppose Obamacare in the majority. In addition, the Congress is full of rich Republicans - more precisely, very rich.

Due to the government’s “shutdown”, the United States had to cancel its participation in the negotiations on the Transatlantic Trade and Investment Partnership, which envisages the creation of a free trade zone between the US and the EU.

As transmits "RT" With reference to ITAR-TASS, the US side said: “US Trade Representative Michael Frohman phoned Karel De Gucht, European Trade Commissioner, to regret that the suspension of the US government would not allow them to take part in the second round of negotiations on Transatlantic investment partnership to be held next week in Brussels. ”

Froman referred to the fact that financial constraints "make it impossible to send a full-fledged delegation of negotiators."

In such a gloomy atmosphere, the American Minister of Finance, Jacob Lew, sounded the alarm. The statement of the Minister told the correspondent. ITAR-TASS Dmitry Kirsanov.

“There is a majority in Congress ready to do the right thing: to open the government and to ensure that we do not step into the abyss,” said the head of the US Treasury on CBC.

The finance minister sticks to the Obama line. He made it clear that the US administration will not compromise with the Republicans.

“... Obama refused to make any compromises on the state debt, and the lower house of Congress is afraid to let go of this financial weapon. After all, having finally received the money, Obama can take the other proposals of the congress quite in Black-and-Redsky. Remember: "We will put together all your proposals and put them in one place." 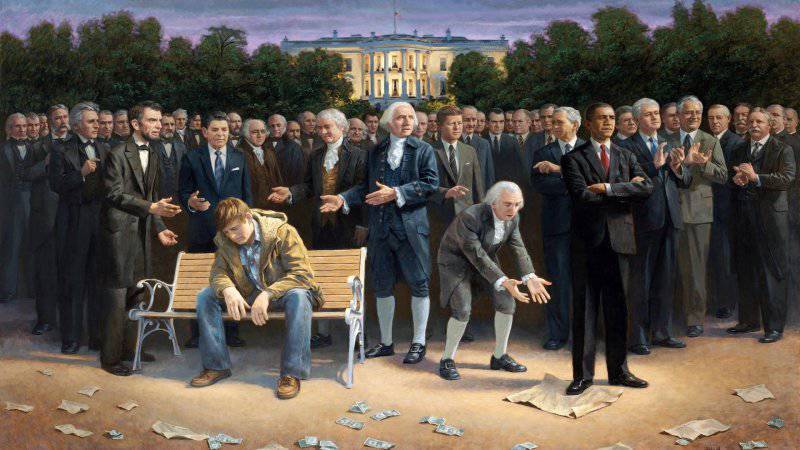 The analyst recalls that for many years the Americans made fun of similar situations with foreign policy partners. For example, they liked to lecture Russian officials in the mid-nineties, when budget disputes were often between Yeltsin and the Duma.

“... Well, do you not like, as they say in America, try your own medicine. For, as the founding fathers said, foreign policy is always only a reflection of domestic. ”

Comrade Babich, in fact, advised America to look in the mirror.

According to Vladimir Zhirinovsky - as always, unequivocal - the US is getting poorer, and they are threatened with disintegration. The dollar as the world's key currency, respectively, will end. In an interview "Voice of Russia" LDPR leader said:

“America is getting poorer. Its economic situation is deteriorating. The dollar as a world currency has no chance for the future. Therefore, in the United States are fighting two forces. The forces of isolationists - they would like America to leave the Middle East, from Europe. And the neoconservatives who wanted to rattle a little with weapons.

Therefore, in the future, of course, America will leave from everywhere and will live like Canada or Australia. And let no one bother anyone in anything! This is the beginning of the crisis that was already in the 1973 year, and 2008 year, and now. And now - the replacement of dollars. And then in general the dollar will leave. Therefore, America has no future. It should fall apart. ”

As for the future default, then, according to Zhirinovsky, such will happen "necessarily".

If the reaction of the leader of the Liberal Democratic Party to disputes between Republicans and Democrats in the US can catch triumphant notes, then Christine Lagarde, head of the IMF, is full of alarm. It's no joke: America can turn off not only Europe, but the whole world!

If American politicians fail to avoid default, the global economy can be seriously damaged. This was said the other day by Christine Lagarde, the words which leads Interfax with reference to the BBC.

“Suspending the government’s work is bad in itself, but refusing to raise the national debt ceiling will be much worse and could very seriously harm not only the US economy, but also the global economy as a whole,” said the head of the foundation, speaking to George Washington University students. “Therefore, it is critically important to resolve this issue as quickly as possible.”

However, in recent days, a lot of experts spoke on TV, on the Internet, in print media. Not everyone is predicting the United States, and at the same time the planet Earth, a catastrophe — at least, one that will devour world finances in the last two weeks of October. America can stay afloat by continuing to cut all programs in a row to the maximum and discard future debt financing in principle. At the very least, this means turning the osteochondrosis of the American neck towards the mirror.

Who will see America in the mirror? Those fools and madmen about whom Krugman wrote with contempt? Those foolish mentors who, in their own eyes, do not smell logs that Babich laughed at? Perhaps those political losers whose overall portrait could serve as Barack Obama - the president of crisis time, the man who became the face of capitalist instability? It was not for nothing that Time magazine, when they printed Obama on the cover before the 2013 offensive, picked up almost black for the black president - tragic - background ...

Observed and translated by Oleg Chuvakin
- especially for topwar.ru
Analytical program "However" with Mikhail Leontiev

Ctrl Enter
Noticed oshЫbku Highlight text and press. Ctrl + Enter
We are
Results of the week. “We will not allow you to show anything! We will show you everything! ”"Shutting down" America
Military Reviewin Yandex News
Military Reviewin Google News
75 comments
Information
Dear reader, to leave comments on the publication, you must to register.