October 10 2013
9
The course of the Second World War, as well as the fairly rapid development of new weapons systems, clearly demonstrated to the Swedes that their weapon beginning to hopelessly obsolete, especially samples of automatic weapons, in particular submachine guns. The solution of this problem was entrusted to the State Arms Company "Carl Gustav". An intermediate solution to the problem was the release of the company “Huskvarna Wapenfabrik” Finnish submachine guns “Suomi”, which were produced in Sweden under license. But already in 1945, the Swedish developers from Karl Gustav presented their own simpler to manufacture and cheaper model, which was designated as M45.


Carl Gustaf M / 45 has become quite a successful model, which went well and for export. The submachine gun was prepared for a long life, it was in service with the Swedish armed forces until the middle of the 90s of the last century. Serial production of this model under license was conducted in the USA, Egypt and Indonesia. Today it is one of the oldest models of submachine guns, which continues to be in service with a number of countries. Over the years of service, the M45 submachine gun has proven itself to be an inexpensive, reliable weapon, which ensured its durability. Initially, the Swedish model did not have a receiver neck, disc magazines were used with a submachine gun that were identical to the Finnish ones, but in 1948, the Swedes created a box store. In the future, all models released were upgraded to use it.

The Carl Gustaf M / 45 submachine gun was in service with the armies of Sweden, Ireland and Indonesia for many years, it is produced under license in Egypt, where it received the designation "Port-Said". A copy of this sample of Swedish small arms was released in the United States, the submachine gun was produced here in the late 60s and early 70s of the XX century by the famous company Smith & Wesson. The American model bore the designation M76, but its production was rather limited (only a few thousand units were produced). Later, the production rights and documentation were sold to another American company, MK Arms, which produced a copy of the Carl Gustaf M / 45 under the designation MK-760. The MK-760 production also remained relatively small, these submachine guns were purchased by a number of American police units. A deeply modified version, in which the original barrel was replaced by a barrel with an integrated silencer, was used by the US Special Operations Forces during the Vietnam War. 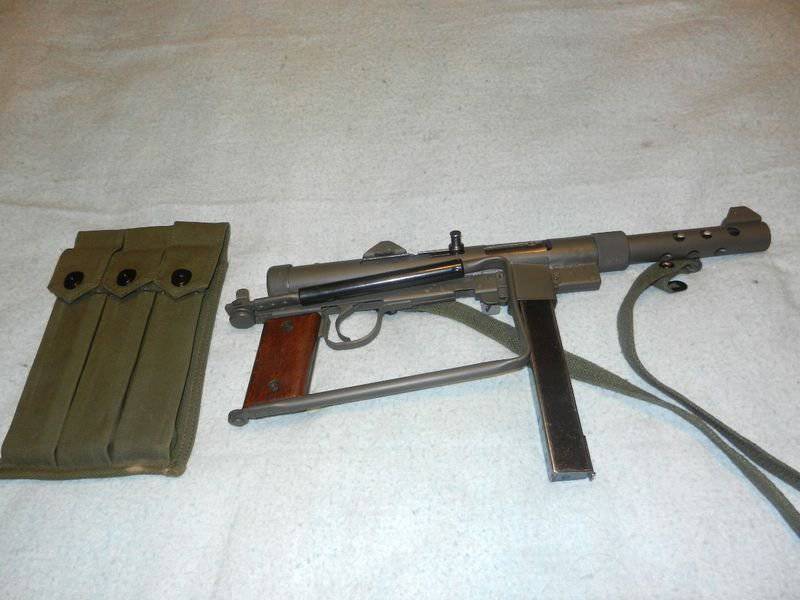 The Swedish submachine gun M / 45 is an automatic weapon, built on the principle of automation based on the free gate. The submachine gun had only one firing mode - automatic, fire from it was fired from the open bolt. Barrel casing and receiver were cylindrical and made of steel. The neck of the store on the Swedish models was replaceable, in the version for the “native” two-row Swedish stores on 36 cartridges and under the four-row box stores from the Finnish counterpart of Suomi on 50 cartridges.

Later, in the modification of M / 45B, the use of interchangeable necks and shops from the Finnish submachine gun was decided to be abandoned, since the "native" shops provided him with much greater reliability during the shooting. In addition, the model M / 45B received a smaller diameter holes in the barrel casing, an improved locking rear cover of the receiver. She used the shop only on 36 cartridges. The reloading handle of the submachine gun is on the right side, it is rigidly connected to the bolt and moves with it during firing. Cartridges are thrown through a special window, which is located above the receiver of the store in the right front part of the receiver. The butt of a steel submachine gun is folded sideways, the sights include a reversing rear sight and a front sight, you can set the range to 100 and 200 meters, respectively.

The modification of M / 45C differed from its predecessors only in the presence of a fastener for a bayonet.

The submachine gun for 9-mm cartridge was produced for the needs of the Swedish army at the company Karl Gustav Stads Gevarsfaktori. Since it was created during the Second World War, and it was adopted in 1945 in the year, it was given the designation М45, it was also designated as Kulsprutepistol. Later, it was even acquired by the CIA for special operations, with the complex name being changed to “K-gun”. 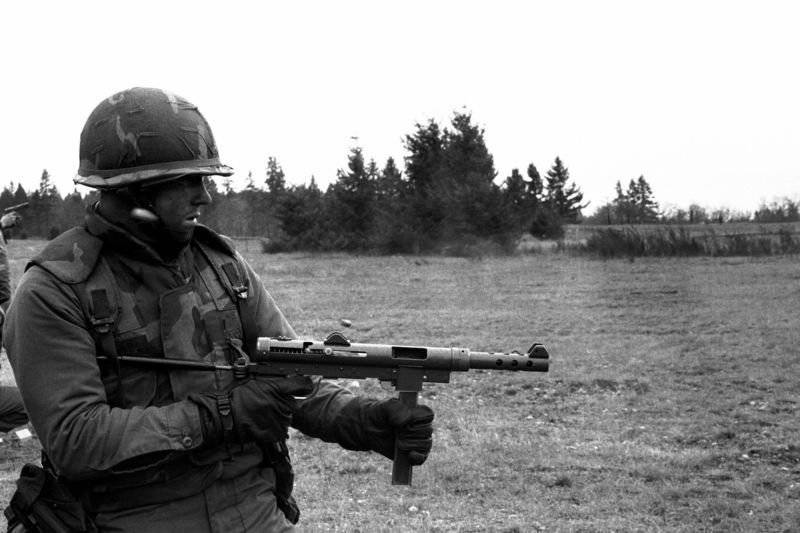 The M45 submachine gun had a barrel length of 213 mm, and the total length of the model with a folded butt was 551 mm, with the butt fully unfolded - 808 mm. The rate of fire was 550-600 rds / min, the initial speed of a bullet 365 m / s. The weight of the submachine gun was 3,34 kg. in unloaded condition. Outwardly, he seemed heavy, but it was wrong. The M45 was distinguished by a small return and excellent balancing. Using a recoil energy in his work, a submachine gun could fire from an open bolt. Like most of the submachine guns of the war, the M45 was made from sheet punching, which made its production quite easy and inexpensive. Native 36 cartridges were more advanced and reliable than those of competitors (Sten, М3, ППШ-41), design.

In Sweden, they were usually armed with police representatives (militias). In the 20th century, the M45 was widely used by the Swedish army as part of peacekeeping operations that were carried out under the auspices of the UN. However, the most significant stage in the career of this weapon was its use in the special operations of the CIA, which took place in China, Cambodia and Laos. In the US, it was used with .45 ACP caliber ammunition, not with the 9-mm cartridge, which was formally accepted for service only after the end of the Vietnam War.

Since this weapon really liked the special forces of the army and fleet, then after Sweden imposed an embargo on arms supplies to the United States, Smith & Wesson simply copied the Swedish submachine gun at the request of the Navy. The American version was designated M76. At the same time, the M76 and M45, using the same firing magazines, had non-interchangeable parts and assemblies. This decision was due to the fact that the Americans did not want to receive charges of illegal copying of a submachine gun. The M76 was produced in the United States until 1974 and in the 70s enjoyed some success among the police, in addition to this, it often flashed in feature films.