Israel and Iran: the new passions 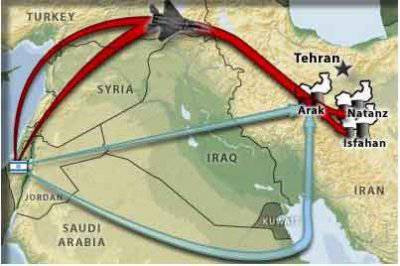 The events of recent days are arranged in a logical chain. Benjamin Netanyahu gave an interview to CBC TV channel, in which he called the former president of the Islamic Republic of Iran Ahmadinejad a wolf in wolf's clothing, and the current president Rouhani a wolf in sheep's clothing. Rouhani publicly spoke on the stupid sword of Israel and promised to continue the nuclear program "at full capacity". October 2 in the forest near Karaj found the body of the head of the headquarters of the Iranian Kibervoisk Mojatab Abmadi: he was shot dead with two shots at close range. October 6 in the press there were reports of the arrest in Iran of four suspects in the preparation of sabotage at a nuclear facility. On the same day, it became known that the last proposal made by the six Western mediating countries was invalid: it was announced by Iranian Foreign Minister Mohammed Javad Zarif.


The other day, Benjamin Netanyahu gave an interview to CBS. “Ahmadinejad was a wolf in a wolf’s skin, and Rouhani is a wolf in sheep’s clothing, who thinks he can throw dust in the eyes of the international community, like everyone else. I wish that we could believe the words of Rouhani, but we must focus on Iran’s actions, ”the prime minister quotes. MIGnews.com.

Netanyahu knows the only way to peacefully stop Iran from developing nuclear weapons - Combine tough sanctions with a military threat. Well, if the Jewish state alone has to stand against Iran, it means it will. Then the prime minister said: “The world must continue the pressure in the name of all that is holy, in order not to let them have nuclear weapons. This is important not only for us, but also for Americans, Europeans, Arabs. The people of Iran, the Persians, you do not want your country to have nuclear weapons, because of this you can not get rid of tyranny. "

Rhetoric, we note, looks like a great American, the one that comes in daily from the world's most democratic tribunes. What, interestingly, is the connection between tyranny and nuclear weapons? Israel has it too. In the USA too. Or does Netanyahu think that the Ayatollah will start scaring its own people with an atomic bomb? It begs the parallel with the "harassment" of Assad of his people by sarin ...

In turn, Hassan Rouhani spoke about the wrath of Israel and the strengthening of Iran.

“Israel is angry because it realizes that its sword has become blunt, and Iran is growing day by day,” Rouhani told journalists in Tehran, reports MIGnews.com with reference to the agency "Fars".

Head of the General Staff Hasan Firuzabadi supported his president. Israel’s threats against Iran, he said, reflect “the deep despair in which Israel is located.” Chief of General Staff called Netanyahu "the instigator of war," and then added that "it has now become clear that the military option is less relevant than ever." Continuing the presidential line, Firuzabadi said that Netanyahu was waving a “dull sword of war” from the UN rostrum, but such threats are no longer effective.

For absentee verbal skirmish followed by actions that other analysts and bloggers attributed to the security services of Israel, acting against Iran. However, we will refrain from commenting on guesses and conjectures. We draw only a chain of events.

October 2 in the forest near Karaj (north-west of Tehran) was found the body of the head of the headquarters of the Iranian Kibervoisk Mojatab Abmadi, reports MIGnews.com.

Comrade Ahmadi was killed by two shots to the heart, according to Iranian media. The local police commander says two are involved in the murder on a motorcycle.

No details have been reported since.

A few days later in the media there were reports of the arrest of four people in Iran who are suspected of preparing sabotage at a nuclear facility. Reports about it "Lenta.ru" with reference to France-Presse.

According to the head of the Atomic Energy Organization of Iran, Ali Akbar Salehi, the detainees are now being interrogated. Salehi did not name their names, but explained that recently the actions of several employees of a nuclear facility seemed suspicious to the organization’s representatives. And in the course of the observation, it turned out that they had planned a diversion.

The world community must make new proposals for resolving Tehran’s nuclear program, since the last proposal made by Western partners in the “5 + 1” format is invalid. This was stated by the Minister of Foreign Affairs of Iran, reports "Voice of Russia" with reference to the RIA "News».

"The last offer made by countries in the format" 5 + 1 "(Russia, USA, France, UK, China and Germany) went to historyand now they must sit down at the negotiating table with a new approach, ”the head of the Iranian Foreign Ministry said.

Finally, on October 9 a new link appeared in the news chain: Israel was indignant at the appointment of Iran to the United Nations Committee on Disarmament Affairs and International Security, reports "Lenta.ru" with reference to the Associated Press.

Israel’s ambassador to the UN, Ron Prozor, in a letter addressed to Ban Ki-moon, said that he felt “incomprehensible” as a country suspected of developing nuclear weapons could be admitted to the UN Disarmament Committee. To this, the ambassador added that the appointment of Iran to the committee "is like the appointment of a drug baron as director of a pharmaceutical company."

Analyst Dmitry Minin ("Fund of Strategic Culture") believes that Israel has launched a strategic project to create the Israeli-Sunni coalition on an anti-Iranian basis. Israel is not satisfied with the prospects for normalizing the situation around Iran. This threatens Tel Aviv with a loss of political influence in the region. According to the experts, cited by the author, the Israeli leadership seeks to "mix up the cards" of Washington to normalize relations with Iran, including through "fancy combinations" (axis with the monarchies of the Persian Gulf).

Israel believes that the pressure of the countries of the Persian Gulf could affect the USA and Europe: after all, oil monarchies are the main energy suppliers in the Old World. Observers note that the formation of the unofficial axis is manifested in the frequent exchange of emissaries between Israel and the monarchies of the Gulf. Israel scares the monarchy, including the expected signing of a military agreement between Iran and Iraq.

Netanyahu’s belligerence and intransigence confuses even John Kerry, who recently shook the Syrian test tube. “You must first use the existing set of medicines before moving on to new ones,” said the US Secretary of State.

That's right: the United States does not even decide on an operation against Syria, and Israel is already dragging them to Iran. What Netanyahu said about Israel’s possible loneliness is very much like geopolitical truth. We should not forget about the "shutdown" of the American government from October 1 and about the default threatening the White House, which leading economists have already called a "catastrophe."

D. Minin believes that Netanyahu’s hopes for an alliance of Israel with the monarchies of the Persian Gulf are unlikely to be justified: there are too many “allies”.

Negotiations on Iran’s nuclear program, we will add, will be held in Geneva in the near future: October 15-16. This time, the US and Europe are waiting for concrete solutions from Tehran.

A week later, it will become clear how the policy pursued by Rouhani differs from that of his predecessor Ahmadinejad. We should not forget that Iran expects new proposals from the world community to regulate its own nuclear program, since the old proposal, according to the Iranian Foreign Minister, “has gone down in history”. As a result, we have just the “historical” alignment of forces: the West and Israel are waiting for the first decisions from Iran, and Iran is waiting for proposals from them.

Let's wait and we are in the middle of October.

Observed and commented on Oleg Chuvakin
- especially for topwar.ru
Ctrl Enter
Noticed oshЫbku Highlight text and press. Ctrl + Enter
We are
Results of the week. "Enter the ambassador citizen!"Geopolitical mosaic: bin Laden's ally is registered as a candidate for the presidency of Afghanistan, and a crisis glass is poured into American state employees for free
Military Reviewin Yandex News
Military Reviewin Google News
302 comments
Information
Dear reader, to leave comments on the publication, you must to register.