On the seas, on the waves ... Ukrainian armored personnel carriers are floating 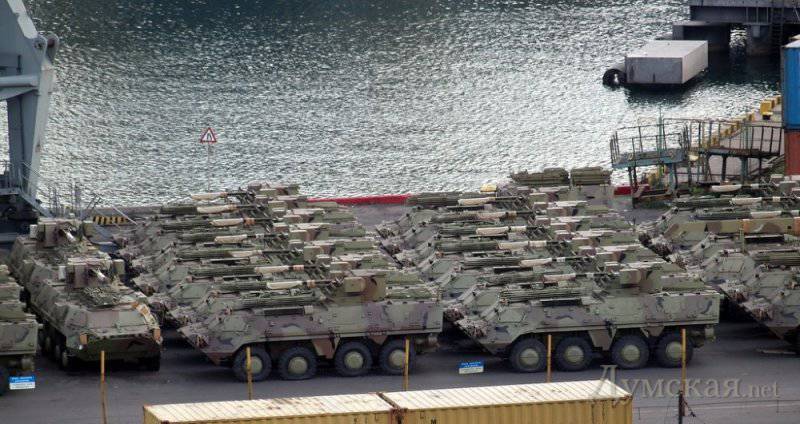 Ukraine’s reputation as a world-class supplier of military equipment in the course of fulfilling the Iraqi contract suffered significant damage.

So, in September, 2009, Ukraine signed a contract for the supply of 420 BTR-4 to Iraq. The Americans lobbied this deal as a thank you to Ukraine for the participation of Ukrainian servicemen in a special operation in the Persian Gulf.

It would seem that the Ukrainian side needs to rejoice - the country will receive 600 million dollars, the capacities of the huge Malyshev Kharkov machine-building plant, which, like air, needs orders, will be loaded - but no. The problems started immediately: it turned out that the BTR-4E planned for delivery had not yet passed state tests and the production was not ready for the release of this combat vehicle. Despite this, the plant’s management decided to take the risk and, having signed the contract, received an advance payment. Already during the testing of the first BTRs, it turned out that the guns, which fired quite satisfactorily at the BTR-3, did not work properly on the new BTR-4. It was also found that the plant’s management used the funds allocated for the production of the BTR-4 for other purposes. Even the dismissal of the general designer M. Borisyuk did not help - the delivery times were already violated at 4 of the month. At the same time, the scandal between the US-Ukrainian intermediaries because of the lone commissions on the deal gained momentum. It is not excluded that this complex of problems led to the fact that Iraq refused to accept the delivered batch of Ukrainian armored personnel carriers. Now, buyers do not consider this technique to be the best in the world, but insist that the equipment is not only old, but also rusty.

In the meantime, the supplier does not find a way out of their current situation, the shipowner who delivered the cargo from fifty BTR-4E to Iraq suffers huge losses due to the forced drift in the Persian Gulf. For half a year, armored personnel carriers have been swimming in the seas, on the waves. No port agrees to receive a vessel with armored personnel carriers on board. And there is no order from the Ukrainian manufacturers for the shipowner to return the armored personnel carriers to Ukraine. The management of the carrier company all the time trying to contact the supplier, but so far to no avail. Shipowner representative A. Varvarenko complains: “Today, none of the exporter’s representatives answer calls, do not pick up the phone. We view the cargo as abandoned.” (By the way, the price of each combat vehicle is a little over a million dollars).

It is known that the manufacturers admitted that they sent the customer the unused equipment. The head of the engineering plant them. Malyshev is justified: "It, as they say, from the knees - a drawing, a workplace, a product. Therefore there were flaws. But we managed to organize." Malyshevists claim that officially the Iraqi side did not send a complaint to the manufacturer for the equipment, and, therefore, all the negative information about the supplied armored personnel carriers was greatly exaggerated. As of today, the Iraqi side has already delivered 88 fighting vehicles. The fate of the rest of the 332 armored personnel carriers, which must be delivered under the terms of the contract, is still questionable.

It seems that Kiev will fight for the contract to the bitter end. National prestige and position among world exporters is at stake weapons.

Ctrl Enter
Noticed oshЫbku Highlight text and press. Ctrl + Enter
We are
Misadventures of Ukrainian armored personnel carriers in IraqThe bankruptcy of Kharkov "Malyshev Plant": who benefits?
104 comments
Information
Dear reader, to leave comments on the publication, you must to register.