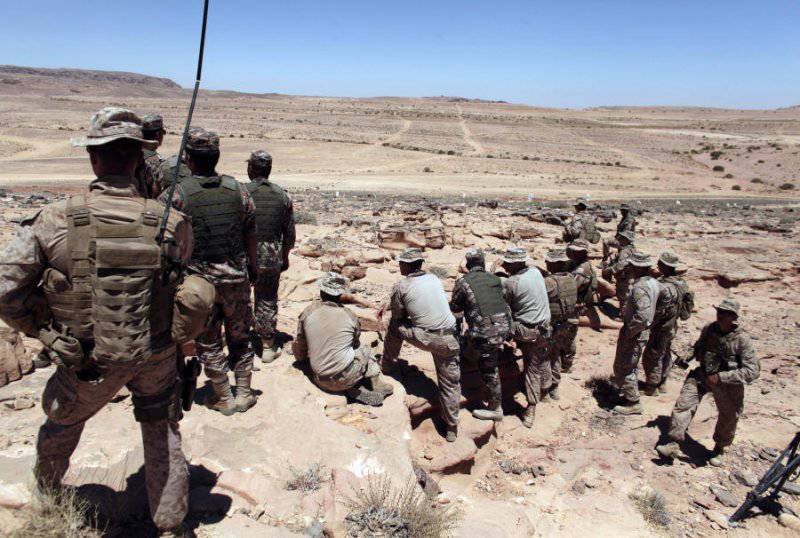 According to Israeli intelligence sources, on the night of October 7, the Syrian government army launched a new offensive - this time in the south. Two tank brigades (about 200 tanks and armored personnel carriers) moved towards El Cuneitra. According to the Israelis, the immediate goal of this large-scale operation is to liberate from the rebels the territories adjacent to the occupied Golan Heights. As a result, any connection between illegal armed groups and the Israeli army should be stopped and their Israeli military assistance stopped ... Subsequently, this group will supposedly advance into the strategic triangle of the Jordanian-Israeli-Syrian border in the province of Deraa in order to prevent the creation of a bridgehead of interventionist and rebel forces in this area forces to strike Damascus. Their locations are already under attack by the Syrian Air Force.


Until now, the command of the Syrian army of the country has avoided such large operations in the region, fearing to provoke an Israeli or Jordanian invasion, but, as military analysts believe, after finding a chemical problem with Russia’s help, it has become confident and determined to achieve complete victory.

In Jordan, two army divisions deployed along the border with Syria are already on alert. In addition, a Saudi tank division is pushed to the border of Jordan, ready to march through Jordanian territory towards Syria in an accelerated march. Disturbing in the media data that the Saudis transferred Jordanian Syrian insurgents around 100 tanks, which most likely means the presence of at least one Saudi tank brigade directly at the borders of Syria, possibly with crews disguised in Syrian, are alarming. form. However, these actions seem to be late.

Amman is an important regional ally of the United States and a key element of its Syrian strategy. He was one of the first among the Arab capitals to call for the resignation of Bashar Assad, which is explained by the complex legacy of relations between Syria and Jordan. The fathers of the current leaders of the two countries, President Hafez Asad and King Hussein, were still hostile. The territory of Jordan was used by foreign, primarily British, intelligence services to conduct subversive activities against Syria since the 1960s. With 1982, it became the rear base for the actions of the Syrian Muslim Brotherhood. The current armed confrontation in Syria began with the March 2011 events in the city of Dara'a, bordering Jordan, through which the second largest smuggling supply channel passes weapons rebel forces.

Shifting the center of gravity of the hostilities to the south of Syria means that the Syrian military command, led by Defense Minister General Al-Freij, once again replays its multi-wise Pentagon opponents behind the maneuvers of the armed opposition. Having outlined the main direction of its strike in the north of the country near Aleppo and in the center near Homs over the past few months, the Syrian generals apparently deliberately created for the enemy a feeling that they left Damascus poorly protected, which turned out to be incorrect. In the hope that the army would become bogged down in the north, the rebels, with the support of the West and the Arab monarchies, including Jordan, secretly accumulated forces in the area of ​​the capital and in the zone of the Jordan-Syrian border a hundred kilometers away. Seeing this, the Syrian army leadership suspended active operations in the direction of the Turkish border, concentrating on the protection of Damascus. According to various estimates, by the end of August, on the outskirts of the capital in Eastern Gute and Western Gute concentrated from 17 to 25 thousands of insurgents ready to break into the center of Damascus, followed by a breakthrough of their main forces from Jordan. A preventive offensive by government forces against this grouping was scheduled just on the day of August 21. A chemical attack carried out before the attack, apparently, was aimed at disrupting it. In recent days, it has been reported that Saudi special forces who had penetrated into Syria through the territory of Jordan and were acting together with the militants of the Liva al-Islam terrorist group may be behind the provocation with chemical weapons.

This provocation really slowed down the process of defeating the shock group of militants around the Syrian capital, but no more. Releasing quarter after quarter of the Great Damascus, the Syrian army now felt ready for the liquidation of the dangerous wedge put forward by Jordan. The Syrian leadership is well aware that although Washington was forced to temper its belligerent statements against Syria, it did not abandon plans for overthrowing the regime and is just waiting for a favorable moment.

In a situation where Kurdish troops took control of Syria’s border with Turkey for a considerable distance in the east and al-Qaeda-oriented jihadists in the west, the implementation of the American plan to seize Damascus by the forces of the pro-Western Syrian Free Army (SSA) moved south, to Jordan. Arab media reported on the "ongoing deployment along the entire 370-kilometer border with Syria," Jordanian and American units. The Kuwaiti newspaper Al-Rai, for example, writes that in the area of ​​the city of Ramta there is a fist of several thousand soldiers and dozens of tanks. Ramtha is just a few kilometers from the Syrian city of Deraa. Sky News Arabia reported that Jordanian troops had been “preparing for operations under conditions identical to those of Syria” for several months. The purpose of a ground operation could be to create a “buffer zone” in Deraa.

Some Arab sources claim that, contrary to official statements by Washington about the “limited” nature of the operation being prepared against Syria, it was from the very beginning that something much more than a strike by “Tomahawks” against Damascus and the military bases surrounding it. They confirm the information that two tank groups are concentrated on the border with Syria - one Jordanian and one Saudi. 3 also sent thousands of militants from the Free Syrian Army to the border, who were trained by CIA instructors over the past few months. The purpose of the invasion should be not only the creation of a “buffer zone”, but also the proclamation of an interim government in the “liberated territory” and the creation of an immediate threat to Damascus when interacting with Islamist groups. Patriot batteries are placed along the border with Syria in case of a Syrian retaliatory strike. It is also reported about the possibility of using airbases and radar stations in northern Jordan in the event of a strike on Syria. At the same time, a large number of military aircraft and UAVs are being transferred to the north of Jordan.

Anonymous sources in the Washington Post reported that in the past few weeks, the CIA sent additional paramilitary groups to secret bases in Jordan to double the number of American instructors trained there and the militants receiving weapons from the United States. In Washington, they fear that "moderate rebels" are rapidly losing ground in the war. According to newspaper sources, at the moment the goal of the CIA operation is determined by the White House’s aspiration for a cynical scenario in which the confrontation will come to a standstill and there will be no winner. CIA support may be enough for the rebels not to lose, but not enough for them to win, writes the Washington Post. Probably, it is meant that in Jordan, apparently, 2013 arriving there in early June in the port of Aqaba 1000 left American marines from the 26 expeditionary detachment, which were then transferred to the Syrian-Jordan border.

Using the concentration of government forces in the areas of Aleppo and Homs, as well as the deployment of the operation to liberate the suburbs of Damascus, the rebel divisions trained by the Americans had already seized border crossings on the Syrian-Jordanian border and in some areas extended the bridgeheads inland to Deraa province. The CCA commanders admitted that their goal was to capture the Amman-Damascus strategic highway. However, the counterattack of the government army that has begun, apparently, will put a limit to the success of the rebel forces in the area.

At the same time, the assurances of the West about the support in Syria of “moderate opposition” do not withstand any criticism - in fact, the Western powers are increasingly helping the most notorious jihadists. Thus, according to reports of the general Arab newspaper Al-Hayat, Islamists from Jabhat al-Nusra played a decisive role in seizing border crossings on the Syrian-Jordanian border. That is, the myth that the pro-Western opposition does not cooperate with Al-Qaeda and is able to achieve something on its own, turned out to be untenable here too. The leader of the Jordanian Salafi Mohammed Shalabi, also known as Abu Sayyaf, actively participating in the war on the side of the Syrian rebels, frankly admits that as soon as the Syrian president is eliminated, he and his comrades will demand that the pro-Western SSA immediately lay down their arms and start building Islamic state. By the way, in the past, Abu Sayyaf was involved in the organization of terrorist attacks against American troops in Jordan. And it seems that since then, their beliefs have not changed.