Leonid Ivashov: "The purpose of the West in Syria is to stop the development of the Islamic world" 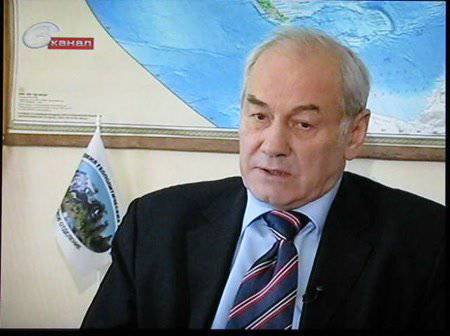 What do Western countries want to achieve by unleashing a war in Syria? Will the US strike at this country? Who and why is pushing Ukraine into the European Union? Why do contradictions arise between Moscow and Minsk? Leonid Ivashov, President of the Academy of Geopolitical Problems, answered these and other questions to the Voice of Russia.


The guest of the program is Leonid G. Ivashov, President of the Academy of Geopolitical Problems, Colonel-General.
Lead - Armen Hovhannisyan.

Oganesyan: I am glad to welcome you. There is an interesting question from Kazan on the name of your academy. "Geopolitics, which was previously the subject of the study of units, is becoming today a question that is being revealed to many. You are engaged in geopolitics. Please tell us what conclusions can be drawn from the current geopolitical layout?"

Well, this can be devoted to the entire transfer. But the question is interesting. I think the listener managed to find something important. Indeed, geopolitics used to be considered even something doubtful.

Oganesyan: Yes. And now, more and more comes into use. With globalization, more and more people began to realize that behind many phenomena of world politics, geopolitics is hidden. Do you feel an increased interest in geopolitics? Previously, she was paid less attention.

Ivashov: Indeed, the attitude to geopolitics has been ambiguous since its formation at the junction of the 19th and 20th centuries. Until 1930 in the Soviet Union, it was perceived as a normal science, promising, even in the first Soviet encyclopedia there were good words. But then it was declared "bourgeois" and developed mainly in the West.

It was strongly moved by the Germans - Ratzel, Chellen, Haushofer, Karl Schmitt and others. But after the Second World War, she was convicted, Karl Haushofer was summoned to the Nuremberg trials, accusing it of geopolitics of fascism and aggressive aspirations. But today geopolitics is in demand.

Oganesyan: What is geopolitics? "Geo" - geographical, but we must add, of course, economic. Geo-economic interest that lies behind the actions of a country or a subject of international relations, which explains certain actions. Is this so, or is there something more?

That is, people tie their behavior, including their policies within the state, to specific geographical spaces. The archetype of man is formed due to the space, starting from Polybius and Ibn Khaldun.

Oganesyan: Klyuchevsky preached this very much.

Ivashov: Yes. They said that it is geography and climate that shape the character of people. But there is such a thing: the sea forms one type of person and his behavior, that is, sea peoples always aspire ...

Ivashov: Yes. And why do they go to sea? They go for prey. The search policy "mining" can be traced to this day.

We conduct research, I teach geopolitics, including at MGIMO, at Moscow State Linguistic University under the slogan "Geopolitics rules the world and determines the future." Many are beginning to understand that politics, especially world politics, is the realization of geopolitical theories, concepts and strategies. Evidence of this is manifested in fact every day.

Oganesyan: Recently they say that modern geopolitics is not only, but maybe not even so much about territories, as about communications, it’s not so much the “body” itself, but its “nerve endings”, if you want - the “circulatory system” . In the modern world, not only the land itself is very important, but also those communications nodes that pass along certain routes ...

Ctrl Enter
Noticed oshЫbku Highlight text and press. Ctrl + Enter
We are
A great interview with Sergey Lavrov: about Ukraine, Obama and IranIn the program "Rise" Sergey Dorenko talked with the ex-Minister of Defense of the DPR Igor Strelkov
12 comments
Information
Dear reader, to leave comments on the publication, you must to register.