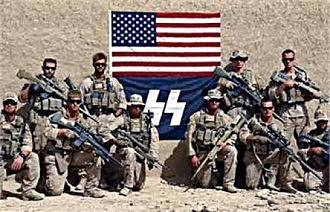 70 years ago, the greatest slaughter was launched in storiesfunded by the US Federal Reserve and the Bank of England.


The primary role in financing Hitler and his comrades was played since the 1920-s of the United States and Great Britain, who considered the energetic Adolf as a tool in crushing the USSR.

The total amount of foreign investment in German industry for 1924-1929. amounted to almost 63 billion gold marks. 70% of financial revenues were provided by US bankers, most of them J. P. Morgan's banks. As a result, already in 1929, the German industry reached the 2-th place in the world, but to a large extent was in the hands of leading American financial-industrial groups.

For example, Farbenindustry, the main supplier of the German military machine, which by 45% financed Hitler’s election campaign in 1930, was controlled by the Rockefeller Standard Oil. Morgans, through General Electric, controlled the German radio and electrical industry. In addition, they owned 30% of the shares of the aircraft manufacturing company Focke-Wulf. Over the "Opel" was established control by the "General Motors", owned by the DuPont family. Henry Ford controlled the 100% stake in Volkswagen. In 1926, the largest metallurgical concern of Germany was established with the participation of the Rockefeller Bank Dilon Read and Kº.

The American cooperation with the German military-industrial complex was so intense and all-penetrating that by 1933 all the key branches of the German industry were under the control of American finance capital, and the major Wall Street banks had full control over every company and concern of Germany.

In August 1934, the American Standard Oil acquired 730 thousand acres of land in Germany and built the largest oil refineries that supplied Nazi aircraft and Tanks gasoline. At the same time, the most modern equipment for aviation factories, which began the production of the latest German aircraft. Germany received a large number of military patents from the American firms Pratt & Whitney, Douglas, and Bendix Aviation, and the Junkers-87 was built using American technologies. The latest models of fighters and bombers of the Third Reich were equipped with English engines. By 1941, when World War II was raging with might and main, American investments in the German economy totaled $ 475 million.

For comparison, Hitler received in 1933 from the Anglo-Americans financing in the modern scale of prices for 66,3 billion dollars, and the Soviet Union under the lend-lease for the entire war - only 12 billion, i.e., more than 5 times .

In 1938-1939 The Soviet Union tried to create a military-political union with the Anglo-Americans against Hitler, but all attempts by the Soviets to oppose Hitler with a single force were unsuccessful, and the “pious” US democracy, together with the “noble” English democracy, sent a fascist ram to the USSR.

Today, when the world financial elite of Great Britain and the United States has begun to implement the next plan for the transition to the “new world order”, identifying its key role in organizing crimes against humanity is becoming a primary task.

Conducting active subversive activities against the rapprochement of Ukraine with Russia, the United States is trying in every possible way to strengthen the anti-Russian national movements in Ukraine. Almost three quarters of the budget of the Ukrainian nationalist organizations of the ROC and the UNA-UNSO is funded by the CIA, and most of the leaders of these organizations are in the service of the American government.

The leadership of the Congress of Ukrainians in Canada, represented by Ed Lysik and Orest Varnitsa, may be the intermediary between VO Svoboda and its overseas patrons. What if financial support for the activities of “Svoboda” from the hands of Canadian intelligence officers falls into the hands of the leadership of Congress, and from there migrates to their accounts not only in Ukraine, but also abroad? Had, they say, the fact of receipt of funds from Canadians for the needs of the VO Svoboda cell in Austria (Vienna).

Considering the availability of such a powerful financial support, possibly coming from Canada and the United States, in the near future we can expect an intensification of the information policy of VO “Freedom”.

The goal of our overseas "friends" remains the same - to prevent rapprochement between Ukraine and Russia! Here, at the right time, the services of VO Svoboda, which will act as an advanced ram of "national patriots" against the rapprochement of fraternal peoples, will be!

So the seven-headed hydra of Anglo-American fascism is still alive! And instead of the heads she chopped off in 1945, the number of goals increased from a dozen new ones! And who does not understand this today is no less dangerous than a traitor to his people!

Ctrl Enter
Noticed oshЫbku Highlight text and press. Ctrl + Enter
We are
Germany should not alone be responsible for unleashing World War IIContrary to Nuremberg: new trends and forms of propaganda of fascism
Military Reviewin Yandex News
Military Reviewin Google News
25 comments
Information
Dear reader, to leave comments on the publication, you must to register.