Shamans: A new airborne assault brigade of the Airborne Forces will appear in Voronezh 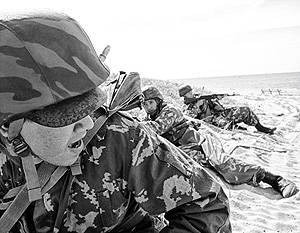 Colonel-General Vladimir Shamanov, Commander of the Airborne Forces, said on Tuesday that in accordance with the concept of development of the Airborne Forces in 2016, approved by Defense Minister Sergei Shoigu, they would form another separate airborne assault brigade, which will be deployed in Voronezh.


“The brigade will be formed in Voronezh before the end of 2016 of the year. The decision was taken by the leadership of the Ministry of Defense, ”said the commander.

“This compound will receive a 345 number in honor of the legendary 345 Guards Bagram paratroop regiment,” Shamanov noted, quoted by ITAR-TASS.

“Like the other formations of our troops, not counting the 31-th Ulyanovsk brigade, the 345-1 SSNR will be equipped with 80% military and contract servicemen with 20% (support units) with conscripts,” he informed. “It’s premature to speak about the combat composition of the brigade: it is still being clarified by us and the General Staff, but even judging by the name of the formation, it can be said that it will include at least two assault battalions in addition to other combat units.”

The commander of the Airborne Forces expressed indignation at the reports of some Russian media outlets that allegedly made by him (Shamanov) statements about the upcoming formation of a new airborne assault brigade in Tula, the homeland of the first Russian defense minister, General-Army Pavel Grachev.

“I did not and could not make any statements about this in any media. All the posts published on this subject with reference to me are a complete fiction, bad faith and unscrupulousness of individual journalists, ”said Shamanov.

In addition, the commander of the Airborne Forces added that the reassignment of the troops to the three separate assault brigades of the Ground Forces will occur soon.

“Three ground assault brigades of the Ground Forces will be reassigned to our troops and will be included in their combat composition in the near future, this issue has been agreed at all levels, the necessary documents have been prepared, and now we are waiting for the presidential decree,” the commander said.

He explained the feasibility of these organizational measures by the need to “have in one fist, under a single command, all airborne and air assault formations and units that, as a mobile reserve of the High Command and the basis of the operational response forces, would act in the same operational plan ".

“Naturally, with the reassignment of these three brigades from the Ground Forces, we will solve all the issues of their combat training, recruitment, comprehensive support and combat use according to our plans,” the commander added.

He confirmed that this year the reorganization of the reconnaissance companies of the 98 airborne division (headquarters in Ivanovo) and the 31 separate air assault brigade (Ulyanovsk) into reconnaissance battalions will be completed, which "will significantly increase the capabilities of these compounds."

“Next year we will hold similar events in the three remaining divisions - we will make battalions from reconnaissance,” he promised.

Recall that in June, Shamanov said that the combat power of the airborne troops will be increased due to the formation of airborne assault and parachute regiments, new regiments will be formed before the 2020 year.

On May 30, Shamanov made a report “On the Prospects for the Development of the Airborne Forces” at a meeting of the board of the Ministry of Defense. After that, he told reporters that the Airborne Command considers it necessary to have army units as part of the “winged infantry” formations aviation, unmanned aerial vehicles and An-2 aircraft.

Ctrl Enter
Noticed oshЫbku Highlight text and press. Ctrl + Enter
We are
Why airborne armored fist. About the statement of the Commander of the Airborne Forces of the Russian Federation
Military Reviewin Yandex News
Military Reviewin Google News
21 comment
Information
Dear reader, to leave comments on the publication, you must to register.