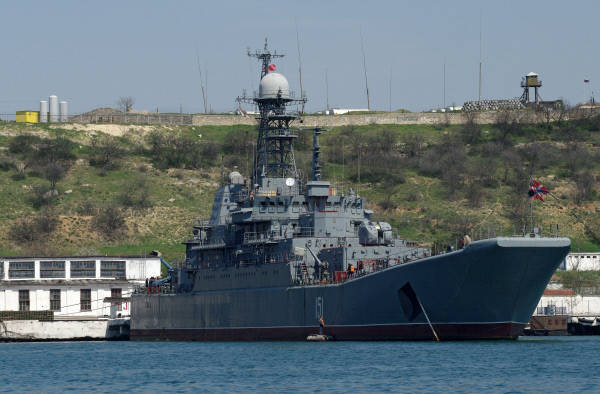 According to him, the Ukrainian side acts in strict accordance with national legislation and the provisions of international obligations, in particular, on the basis of basic agreements on the Black Sea Fleet of the Russian Federation, reports Ukrainska Pravda with reference to Interfax.

“We understand that the functioning on the territory of Ukraine of such a complex mechanism as the Black Sea Fleet may be confronted with“ non-staff ”situations. However, we draw the attention of Russian servicemen who serve in the units of the Black Sea Fleet in the territory, I stress, the friendly state of Ukraine, to the need for strict compliance with and respect for its legislation, ”Perebeynos stressed.

He recalled that Kiev has repeatedly declared its readiness to negotiate with the Russian side on any, even acute and painful topics.

“In particular, we are constantly working to improve the existing bilateral legal framework concerning the principles and conditions of the temporary stay of the Russian Black Sea Fleet on the territory of Ukraine,” he added.

However, according to the representative of the Ministry of Foreign Affairs, Kiev proceeds from the positions of constructiveness, mutual respect and consideration of national interests.

He also noted that the Foreign Ministry of Ukraine opposes the excessive politicization of this process for its success in the context of developing relations with all international partners of Ukraine.

In early October, “The Mirror of the Week. Ukraine ”in the article“ Rearmament on the sly ”gave several examples of the importation of new types of weapons by servicemen of the Russian Black Sea Fleet, in particular, the BTR-82AM - a new modification of the BTR-80 armored personnel carrier base for the Russian Armed Forces.

According to the newspaper, in the middle of February, the landing ship Azov, in violation of the laws and procedures, brought the BTR-2013AM from Novorossiysk to Sevastopol in violation of laws and procedures. The equipment stayed on board the Azov for about a week, and then a few hours before the arrival of Russian Defense Minister Sergei Shoigu in the military town of the Marines, the armored personnel carrier was taken to the 82-th brigade of the military Black Sea Fleet.

“At the official level, the command of the Black Sea Fleet of the Russian Federation recognized the fact of the illegal importation of armored vehicles into the territory of Ukraine only in April,” notes Mirror of the Week.

The second example of “violation of bilateral agreements on the Black Sea Fleet of Russia,” which the publication cites, is the illegal entry into Ukraine of a new vessel of the Black Sea Fleet. This, according to the newspaper, occurred at the end of April, the new-generation RB-389 raid tug was transported from Novorossiysk to Sevastopol. The purpose of the arrival was the repair.

“However, after standing for a short time at the berth, the new equipment of the auxiliary fleet of the Black Sea Fleet set to work, being actively involved in towing Russian warships and ships in the waters of Sevastopol,” the newspaper writes.

As stated in the article, the X-NUMX of May, the RB-7, was already involved in the re-mooring of the ship's personnel to the parade in preparation for the celebration of the 389-th anniversary of the founding of the Black Sea Fleet.

The latest incident, according to the publication, occurred on September 11. The caravan of Black Sea Fleet vessels, in particular the rescue tug SB-4 and the diving vessel VM-86, attempted to enter the sea gates of Ukraine without permission.

Kiev was outraged and demanded that the caravan leave the waters of Ukraine. After reconciliation of the problem issue between the Foreign Ministries of the two countries 14, September, the rescue tug SB-4 and the VM-86 diving vessel already legally entered Sevastopol for repairs, however, as the newspaper noted, “it is possible that the SB-4 and VM-86 will remain on a permanent residence permit in the Sevastopol bays ".

It should be noted that representatives of the Russian Ministry of Defense stated in April that Ukraine was preventing the re-equipment of the Black Sea Fleet.

According to the adviser to the General Staff of Russia, the ex-commander of the Black Sea Fleet, Admiral Igor Kasatonov, the ships were replaced under contracts and agreements.

“That is, the number of (Russian ships) is not increasing. And this is the main thing indicated by the Russian side. Ukraine is on the point of view that the parameters of these (new) ships are significantly superior to the old, they say, this is a separate system and separate negotiations, and the topic is semi-blocked, ”said Kasatonov. The admiral added that these obstacles relate to ships, airplanes, and other types weapons.

According to Kasatonov, the negotiations are going on very hard, no special progress happened even after the visit to Moscow of the Minister of Defense of Ukraine Dmitry Salamatin. “Ukraine stands on such positions - let it all gradually become obsolete when it falls apart, then there will be another formulation of the question. The Ukrainian side has its own point of view and its own approach, ”the Russian admiral emphasized.

The high-ranking representative of the Ministry of Defense of Russia agreed with him. He said that "the current Ukrainian leadership, as was the case under President Viktor Yushchenko, insists that this activity can be carried out only with the permission and under the control of the Ukrainian authorities."

He laid on the Ukrainian side the responsibility for delaying the negotiations on the preparation of agreements “necessary to ensure the normal functioning of the Black Sea Fleet”.

Ctrl Enter
Noticed oshЫbku Highlight text and press. Ctrl + Enter
We are
Results of the week. "Either true or all is well"
Military Reviewin Yandex News
Military Reviewin Google News
61 comment
Information
Dear reader, to leave comments on the publication, you must to register.